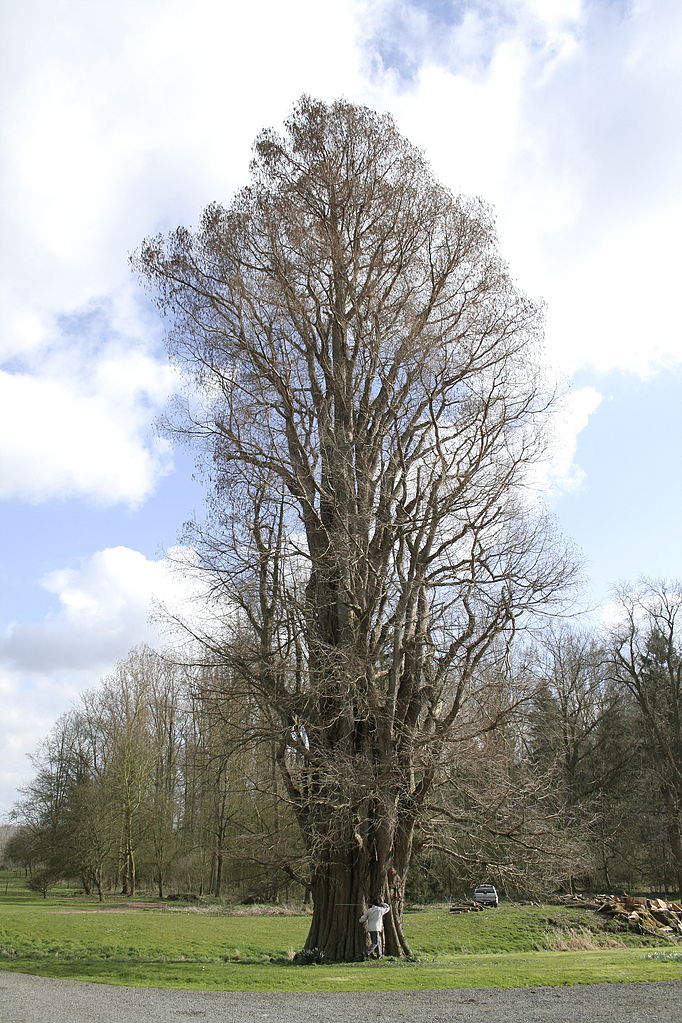 Kingdom: Plantae
Division:    Pinophyta
Class:         Pinopsida
Order:        Pinales
Family:      Cupressaceae
Genus:       Taxodium
Species:      T. distichum
Binomial name:    Taxodium distichum
The name Cypress is given to several plants of the cypress family known as Cupressaceae, a conifer belonging to the northern temperate zone. Most of them are trees, however, some are shrubs.

Cypress is the derivative of the Old French “cipres,” that was derived from cypressus, Latinized Greek.

The most popular Cyprus tree, all over the world embraces the coastline of the Pacific. This solitary Cyprus is a natural image of status treasured on the 17th mile Drive in California in the Pebble Beach.

The history of the Cyprus tree dates back from the prehistoric Egyptians who made use of this long-lasting tree for building mummy cases. Apart from the Egyptians, the Greeks were also admirers of this tree; they made use of the Cypress tree wood to make urns and preserve the ashes of those who sacrificed their lives in the battles. The still more fascinating fact is that Plato’s code of law was etched in the Cypress wood, the reason being it was believed to last more than brass. The Cypress tree mainly grows all along the southern coastal line of North America. They are easily adaptable to wet and swampy soil with bright sunlight. But few of them thrive on the east of the United States, extending from Delaware to Florida. The remaining prospers in climates that are warmer; Texas and Nevada are examples. The soils in the parched states provide a variety of nutrients to the soil, and also have muddy or clayey soil as part of their soil.

The initial step in selecting the site for planting the Cypress for reforestation has to be done quite earlier than the date of planting. The suitability of the soil is, to a great extent dependent on the soil characteristics and its hydrology. It takes time in assessing the hydrology of the site; this is the reason why it is essential to decide on it earlier. Besides, you must provide enough time for ordering the planting stock, prior to choosing a site, this is necessary, in case you need time to set right the soil, and also in getting ready the equipments and labor for planting.

In case the moisture is regulated, the Cypress grow well in most of the soil like sand, peat and musky ones. Possibly the ideal soils are sufficiently drained and sandy, moist loams, however, there is a tendency for these soils to benefit other varieties of trees too. Cypress trees grow even on clays, insufficiently drained, and Pond Cypress in particular, grows properly in organic and acidic soils. If you plant your Cypress tree in hardpan or lime rock that are shallow, well then their growth gets retarded. USDA Natural Resources Conservation Services provide details of soils that map each country. The soil map gives you knowledge of the class of drainage, fertility of the soil needed, seasonal high water table and also general requirements for the different forest varieties.

Peat is the ideal soil needed for Cypress, because it grows in sites where the cypress grows naturally. In case peat is unavailable, get some kind of humus, like sifted compost. For more nutrients and minerals, mix 11/2 cups of cottonseed meal along with the compost.

Finally, be certain that the soil is moist and not totally drained. Even though cypress trees grow adjacent to water areas, they never grow in water. They can tolerate continued flood situations; however, they will continue to grow on grounds that are dry after the flooded water moves away.

Cypress trees flourish well where there is bright sunlight, even though it adjusts with slight shade. The majority of cypress trees thrive in properly drained soils. Planting a series of cypress trees in the form of a fence gives you good privacy. Get ready the soil by using a rotary tiller to split up the soil and slacken off any dirt or clumps of mud. Discard big pieces of rocks and draw away all the weeds in the planting site.

With the aid of a shovel, dig a hole to the depth of the vessel, which contains the sapling and many inches wider.

Plant your cypress tree by placing it in the middle of the hole replacing the original dirt to its brim. Cover the root with soil to a minimum of 2 in. Ram down the soil with your foot or hand and remove air pockets if any.

In order to maintain the soil moist and prevent it from weeds, put around it, good quality mulch of sufficient quantity and to a height of 1 or 2 in.

Step 4
Soon after planting, it is imperative that you water your tree. Soak the ground with water with the help of a hose. For attaining a healthy growth, when the climate is dry, water the cypress tree weekly once to obtain good health. In places where you get a good rainfall, water the tree only when the rain is scarce.

The amount of water needed depends on the type of cypress. The water needed for Fake Cypress is more than that needed for genuine ones from the Cypresses genus. The soil needed for the Leyland cypress is a properly drained one which requires watering only monthly twice when the weather is dry. Naturally the Pondy cypress grows where the site is wet. The Bald Cypress has a tendency to grow adjacent to flowing water and also in wet urban sites. Bald cypress and Pond cypress that are fake cypresses need a considerable amount of water when the weather is dry.  The Italian Cypress called Cupressus Sempervirens and the Mourning Cypress called Cupressus Funebris prosper in Mediterranean climates, having a reasonable quantity of humidity. The zones that they grow are USDA 7b to 11. Sargent Cypress called Cupressus Sargentii, grows in the rocky areas of USDA zones 8 and more. Since it goes well in rocky places, it is adjustable to heavy rains and dry spells.

If the Cypress are planted in rows, they grow well as a dense border, capable of withstanding strong winds and also other stormy weathers. Even then, for confirming that your venture is paying off, observe these small, but important tips on proper nurturing of your tree.

At last, prune and remove the branches that are diseased or dead the moment you notice them, and check for root disease and for canker on a frequent basis.

During dry climates the young plants require additional water. When the ground is frozen, keep away from watering them. The total health conditions of your cypress are affected if weeds grow near the tree, since they lose the nutrients and water supplied. The Leyland Cypress is adjustable to profound trimming; as such, it is possible for you to give it the form of a windscreen or a hedge. In places where the wind is strong, like that of the coastal areas, it is possible for you to shield the destruction through wind by giving the tree a wrap of burlap. The Cypress trees infrequently are attacked by insects as well as fungi. In order to avert the cypress infection, like the infestation of the fungi which causes canker, it is advisable to prune your cypress when the weather is dry. Evade excessive supply of water to your cypress to keep away the diseases of the decaying of the roots. Plant real cypresses except in properly drained soils. At times cypress trees get infected by pests, like tiny cypress scales, mites, caterpillars, aphids or other varieties of insects. Little pests like mites, aphids and scales are discarded by spraying insecticidal oil sprays. Pick up manually and spray insecticides or water and discard big pests like caterpillars.

Do you know what the foremost doors of St. Peter’s Basilica in Rome and Noah’s Ark have in common? According to legend, they were both made of the long-lasting wood that is known to us and that is Cypress. Actually, it is understood that the original door of St. Peter was over 1,100 years old, a fact that came to light only when the building was demolished and reconstructed in the 1500s. There is no better wood to compete with this cypress.

Those people, who are often engaged in work with cypress, are of the opinion that the natural durability is a bonus for application for external use. This is because cypress produces Cypressene, which is its own preservative oil; the heart wood of this cypress has resistance to insects, chemical corrosion, decay and several other damages. Because of this, the Cypress  wood has been since long a fond selection of a tree for the outdoors, and withstands the vicissitudes of the weather for a long  time. Telephone posts, fence posts, docks, pilings and rail ties, all use the Cypres wood.

In addition, this cypress wood is extraordinarily stable; as such, it does not split or warp. Besides this, it has the stability in dimension, because of which it quickly absorbs stains and paints. Several people chose cypress sidings to give it a natural Honey-like hue look.. This is because it is able to sustain with a clear sealer or even allowed to weather a deep gray color. In addition, Cypress is a good wood for interior decoration, for designers, architects and owners of residential buildings all over the world and for researchers.