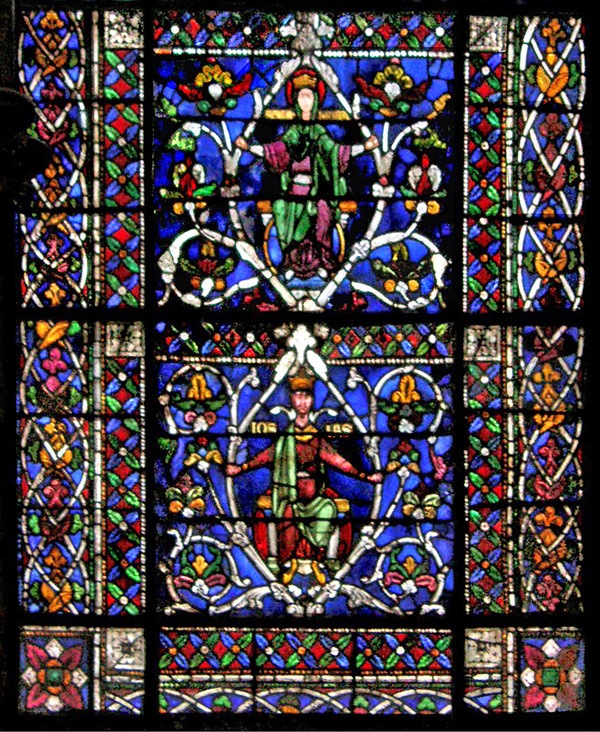 The Trees called Jesse was well known during the 12th and 13th century through murals, manuscripts, stained glass and sculptures. These trees signify the pedigree of Christ, because they portray the Virgin Mary as ancestor of Jesse, the father of the King David. This was observed in order to complete a prophecy in the Book of Isaiah (11:1) “And there shall come forth a rod out of the stem of Jesse and a branch shall grow out of his roots”. The majority of Jesse trees have at their foot a Jesse lying down and a tree sprouting from his side or navel. On the branches above the tree show the different Kings and Prophets of Judah. At the extreme top are seen Christ and Mary. Occasionally, the Virgin embraces the infant Jesus. But at Saint Denis, we see in the register, Mary below Jesus. Jesus is encircled by seven doves; these perhaps are symbols of the seven gifts of the Holy Spirit.

Often Jesse trees were related to the excessive admiration of the Virgin Mary, the reason is that Mary is illustrated as of the royal blood.

The Jesse tree obtained its name from Isaiah 11.1 “A shoot will spring out from the stump of Jesse, and a branch out of its roots.” It is a way of expressing the Story of God, which is in the Old Testament, and also to relate the Advent Season showing the authenticity of God across 4,000 years of history. The Branch is a biblical symbol of novelty from disheartenment; this became a means of communicating the predictable messiah (for instance, Jer 23:5). As such, it is a fitting sign of Jesus the Christ, who is the exposure of the elegance and magnificence of God.Making a Jesse Tree

A Jesse tree, whether at the sanctuary or at your home, be it a poster on the wall or a banner, having the logo attached to it or even as a tree having a logo attached to the branches, is still a Jesse Tree.

It is possible to have a plain banner or a descriptive one with creativity. Generally, a logo and banner hung that is made for a sanctuary will be of cotton or heavy felt or even suitable fabric, with the design done by either appliqué work or embroidery, and the logo fixed with Velcro or pins. If it is for a Sunday Class or for your home, then make it with poster boards and do the design with marker pens, prepare the logo with either construction paper or cut from  magazines or from old Christmas cards

The normal background is blue or purple (the color of advent), with a big stump cut with one green branch grown from a side and the logo fixed about the branch.  Normally a star is hung at the top which is the last symbol.

In case you are using a tree (artificial or real, possibly green), and if your intention is to add only one ornament daily, then have a small tree. On the other hand, if you intend to add ornaments made by all children every Sunday, then you need a big tree. If on the other hand, it is a communal project, then a wide variety of ornaments made by children consisting of hand colored paper and more complex craft work are used. Every year the styles may vary. If you use Christian symbol ornaments for the Jesse Tree, then the primary colors of the ornaments are the liturgical colors of Christmas, which are gold and white.

Whilst on certain occasions, you feel like having a quality control and remove certain ornaments hung on the sanctuary tree, particularly those that are done by children, a second would be to permit them on grounds of communal activity and celebrate the tree’s unity. This represents a forum for diversity.

Sample Story and Readings for a Jesse Tree The real story is explained with every symbol is a brief (2 to 4) summary of the concerned person or event, along with their importance in the open witness to God revealing himself in history. Connected issues are put forward that have relevance to the events in the New Testament. Never consider the Old Testament as the grounding for the New Testament. The endless love, grace and patience of God all through the century’s right up to the least expected people in the middle of their failures, is pointed out. By all means it reaches its climax in the incarnation. However, as Christians, it is essential for us to go through the teachings in the Old Testament story, in its teachings about God and of ourselves, and not using it for other purposes. That is the purpose of the Old Testament according to the scriptures (see Hearing Old Testament Advent Texts).

Furthermore the episodes and the personalities are replaced for a few of these, as far as the major outline of God’s mercy is depicted where man fails and the trust in God is restored. Various features of some events or personalities have emphasized this in several periods. Practicing the Jesse tree regularly every year, after 3 or 4 years’ practice, it is possible to construct the story by giving stress on different aspects. Christmas day falls on different days, therefore the character of the previous week requires an adjustment in the number of days connecting Sunday and Christmas Day. It is possible to use a Magi to conclude as a sign of Christmas Day and a star on the tree top. Otherwise, use a candle instead of a Magi and a star for Christmas Day.

If only on Sundays you should use the tree in public, the coming week’s story is mentioned each Sunday with the proportionate symbols.  This is particularly a suitable activity for a children’s church. Otherwise, use it as a sermon for children during Advent, in the Morning Prayer.