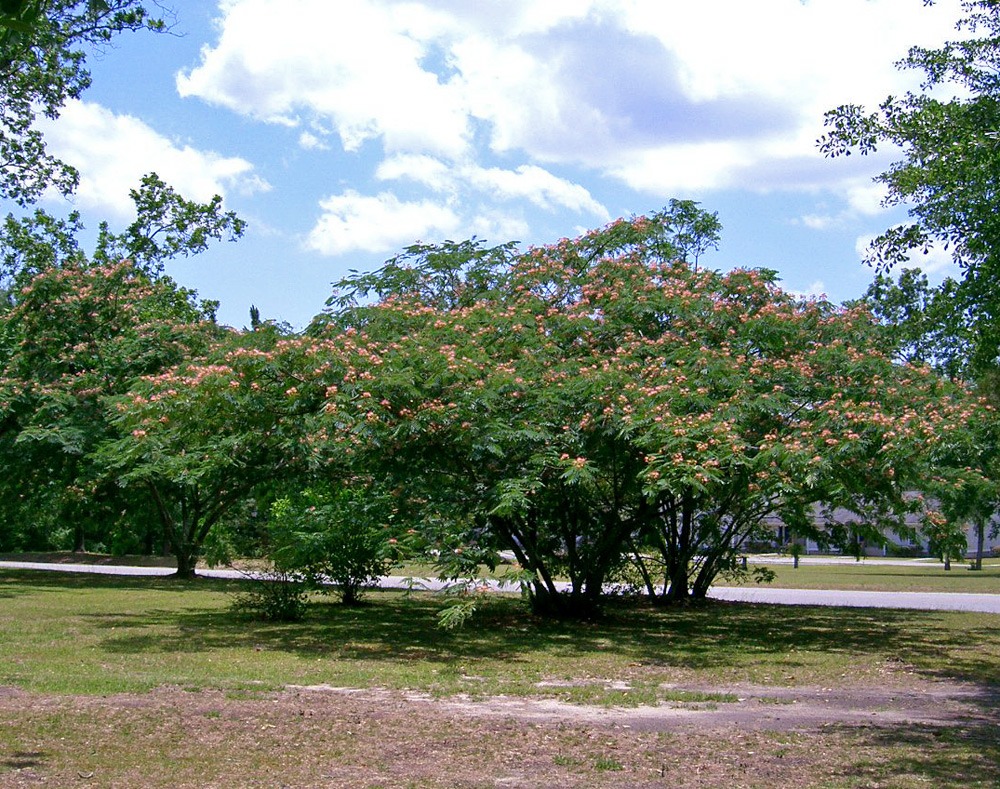 The fast-growing and deciduous Mimosa tree has low branches and spreads to take up a lot of space. It has delicate and lacy foliage that resembles a fern. It turns into a splendid sight with fragrant pompom blooms, which are pink in color, and silky and puffy in appearance. This can generally be noticed during the time between late April and early weeks of July.

The tree is also home to a huge number of seed pods that give shelter to insects and cause diseases such as vascular wilt. In spite of its short lifespan, Mimosa is popularly used for purposes of building terraces and patios due to its tropical look that provides light shade. The Mimosa tree is scientifically known as the tree Albizia julibrissin.

Its bark is generally thin, and most likely, gets damaged following a mechanical impact. As the tree grows, its branches droop and are often required to be pruned in order to achieve clearance for pedestrian or vehicular movement below the canopy. It’s often trainable and safe to grow it with multiple trunks as it grows very quickly, almost at a rate of 2 or more feet in height with every passing year.

The Mimosa is found native to many Asian countries, including between Iraq and Japan. The Department of Agriculture in U.S. recognizes it as a winter hardy plant under the zones 6 to 9. It is advised to grow it in areas with full exposure to sunlight. The Mimosa does not depend on any specific soil type and tends to have low tolerance to salt. However, it grows well in a soil that is acidic or alkaline in nature. Even though it can tolerate drought conditions, it tends to give out a deep lush green appearance when provided with adequate moisture.

Despite its affinity towards light soils, it can tolerate varied types of soils and grow in any soil that is well-drained. It endures drought and summer heat, but grows best in a soil that is consistently moist in nature.

It is advised to plant it in well-drained soil with enough exposure to sunlight. Nevertheless, Mimosa trees tend to adapt to any soil that is well-drained.

The Mimosa tree sparingly needs water. It is only required to water it if you live under extreme dry conditions such as in a desert or during dry spells.

A mimosa generally does not bloom until it reaches a height of 10 feet approximately. The rate of its growth depends on the nutrients and the moisture present in the soil. Moreover, it is necessary for a mimosa to be old enough so that it can have extensive branches which help in blossom development. As it blooms, it contains fragrant flowers which are up to 2 inches in width on its various branches. These fluffy flowers possess enough fragrance to lure pollinating insects.

Once mature, the mimosa flowers every year between the month of May and July. Coaxing the blossoms into a full bloom requires warm temperatures.

Full sun and a well-drained soil with less salt and acidic or alkaline nature benefits Mimosa tree the most. Even though it survives lesser watering, it is advised to water the soil before it dries out in order to achieve a rich green color on the tree as well as to ensure its healthy growth.

Due to its long and drooping branches, mimosa trees require frequent pruning to prevent its breakage and keep its limbs strong enough. It is safe to prune it any time during the year as the tree is not particular about when it is pruned.

The Mimosa trees usually host unwanted insects and pests such as mites, webworms and scales which appear to have a cottony cushion. The scales are easily recognized by gardeners due to their big white egg sacs. The webworm larvae spin their distinct gray webs around the leaves. A water blast can wash away some pests, but still the gardeners may need to make use of insecticides and miticides in cases where the tree seems overwhelmed by the invasion of insects. Insecticides end up being ineffective in clearing the cottony cushion scales. Therefore, a biological control method can be used similar to the usage of vedalia beetles for the scales. Along with this, raking the leaves can clear out the pest population too.

This variety of mimosa harbors bright and showy flowers that are pink in color. These flowers can be easily obtained from most nurseries. Often planted for its distinct accent, this tree can grow up to an average height of 25 feet.

This tree with creamy white flowers is an unusual variety of the mimosa tree. Although similar to the Rubra, Alba lacks red pigments. Alike other mimosas, Alba’s wood are so weak that it can be easily damaged due to ice, wind or both.

A rare cultivar of mimosa, Charlotte, is resistant of mimosa wilt, a deadly disease that can easily kill any mimosa tree.

The unusually dark and burgundy foliage of Summer Chocolate makes it distinct from other mimosas which possess bright green foliage.

The very tall and umbrella-shaped mimosa is called Umbrella. It grows up to 40 feet in height and has a canopy similar to the shape of an umbrella.

Strongly weeping and short, rhe Pendula is a cultivar of mimosa that grows up to only a height of 10 feet.

Bushier and shorter than other mimosas, the Rosea only grows up to 10-15 feet in height.

How To Work With Mimosa Wood

Though the pine wood and mimosa wood share about the same hardness, many prefer working with the latter because of the absence of the sap and pitch like the pine, which hampers facile working. Moreover, Mimasa has a grain structure that is ideal for intarsia and fretwork.Using a half an inch thicker mimosa wood will take care or the possibilities of breakouts. When sanding mimosa wood, use a finer paper of about 220 grit.To finish mimosa, and retain its natural wood tint, use clear finish lacquer (water based), and make sure to sand in between each coat. A urethane finish, though lacking the water based level of finish, can darken the surface of the wood. Finally, one can conclude that mimosa, even though not popular as a commercial wood, seduces scrollers with its east-to-cut features and beautiful color.