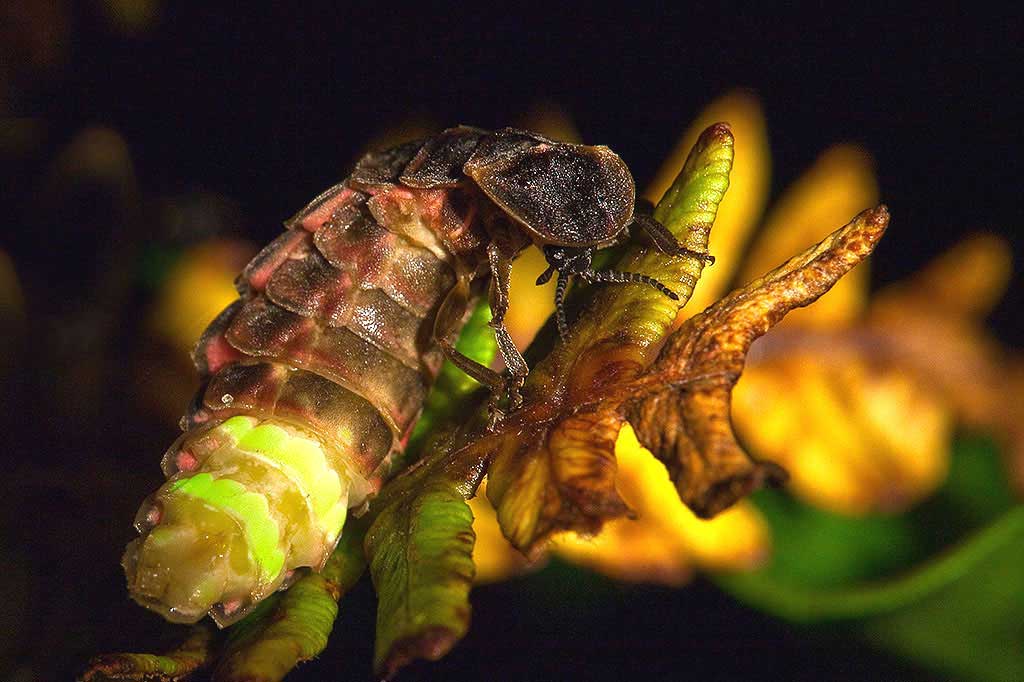 A Glow worm commonly refers to several types of adult female insect and larvae forms that have the ability to glow with the help of Bioluminescent organs. They generally look like worms, but are from the insect families, all being beetles except the two families that occupy flies.

Glow worm beetles belonging to the Order Coleoptera is classified into several families, like,

Lampyridae, the beetles, which are commonly known as fireflies can be commonly found in the whole world. The adult female of this family is wingless, and is quite popular in literature, as Lampyris Noctiluca, especially in most parts of Europe. The male glow worm of this family does not glow, except the one from the genus Luciola, which belongs to the same family. The juvenile glow worm looks similar to the female firefly, as both lack wings.

The beetles from the family Phengodidae are commonly referred as Glow Worm Beetles and the larvae form of this beetle aee commonly termed as glow worms. They are commonly found in the South and North America.

The Rhagophthalmidae family consists of beetles that have bioluminescent organs on all the trunk segments. They are closely related to the beetles of the family Lampyridae and Phengodidae, and are inhabitants of Asia.

The remaining families Mycetophilidae and Keroplatidae also consist of invertebrates, commonly referred as glow worms, but are actually the insect “flies”.

The glow worm beetles are small invertebrates that attain a maximum size of 2.5 to 5.0.cm. They can be seen in brown, black, green, red and yellow colors. These glow worms can be easily classified as beetles, especially due to their shell like skin type. They have flat and long bodies with light producing organs. Glow worms of different families have different organs that produce light. Some have Bioluminescent organs on the trunk segments, whereas, some have additional organs on the head. The colors of the light produced by the beetles of different species are also different. The railroad worms of the Phengodidae family produce red light, whereas some other produces blue-green light. The average expected lifespan of this creature is around 5 months.

Glow worm beetles are very common in the UK, especially between the months of June and October. The beetles from the Phengodidae family are found in the New World that stretches from the south of Canada to the region of Chile. The species from the Lampyridae family is commonly seen in tropical and temperate regions, as well as in marshes and wet areas. The female and the larvae are usually seen in forest litters and other such places.