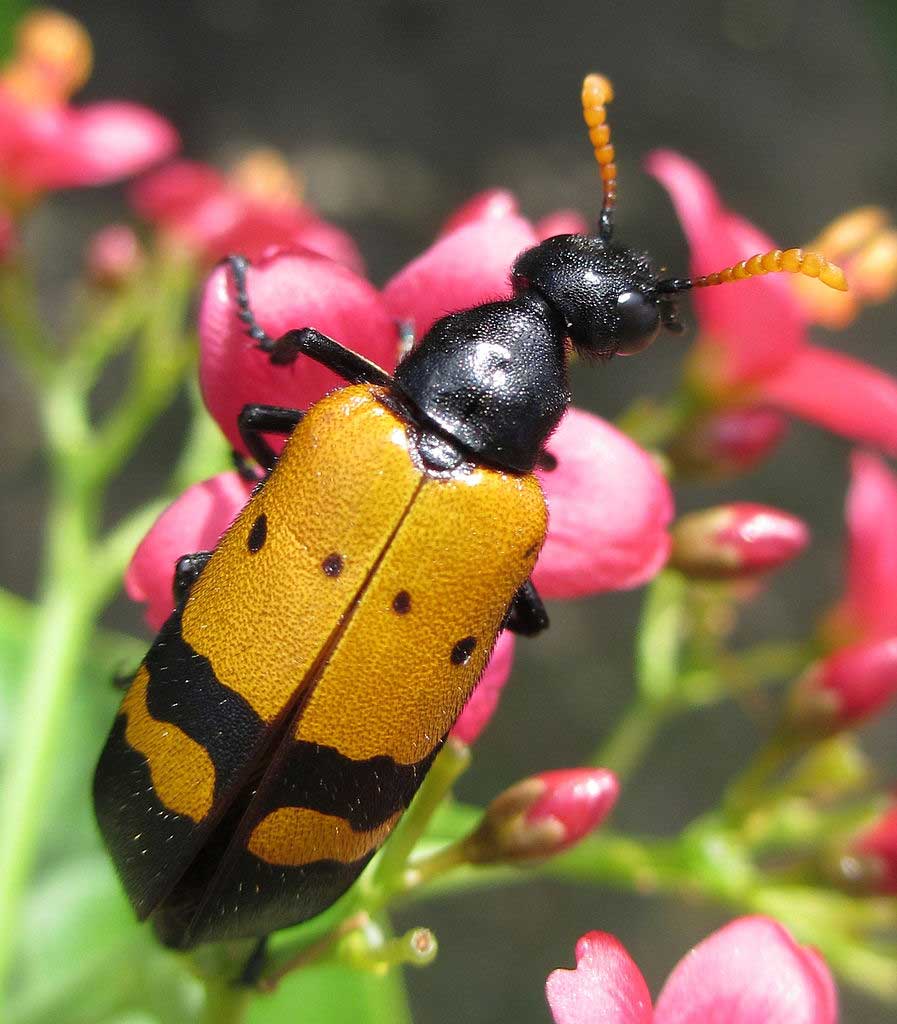 Blister beetles are a member of the family Meloidae. They are known for their defensive secretion of Canthraidin a blistering agent. This Cantharidin is a very harmful agent to human beings, as well as for horses. In many cases, the horses that came in contact with this blistering agent secreted by this beetle, often die when they consume the hay in a considerable quantity when it is infested with this poison., the poison may cause fever, shock or many other fatalities in horses,. Sheep and cows have also been affected by this beetle poisoning.

There are about 7,500 species of blister beetles known worldwide. Some of their species are colored aposematically (warning coloration) and many proffer warnings by their conspicuous coloring.. The Canthraidin is a toxic chemical which causes painful swelling and blistering of the skin. It is also used medicinally to remove warts. Primarily, blister beetles are found Midwest and Southwest regions of the United states. They also found in the agricultural areas of Canada and are fairly common in North Carolina.

In the blister beetle group, there are more than 2500 species that is divided among four subfamilies, namely, Eleticinae, Nemognathinaem, Tetraonycinae and Meloinae. From these subfamilies, the Electicinae beetles have the most exciting species. The members of this subfamily mainly inhabit eastern Asia and parts of Africa. The Meloinae beetles can be found in all the parts of the world, except Australia. The beetles from Tetraonycinae subfamily are endemic to America. The other species from the Nemognathinae family, having lengthy maxillae, are found in Australia.

Blister beetles have soft bodies and their size ranges from 1 to 2.5 cm in length. They have a very thin and long cylinder-shaped body with large heads. They are found in most parts of Canada and the US. They have narrow and elongated bodies which can be striped, brown, black or metallic green in color. There are many insects such as flies, bees and bugs which eat dead or live blister beetles to gain protective qualities of the chemical defense. These insects obtain immunity from the Canthaidin chemical and remain unharmed. The striking and bright color combinations of the species from the Meloid group of beetles are a signal to the predators to beware of them, as their soft tissues and blood contains Cantharidin. This harmful chemical is developed in the male beetles and transferred to the female during the mating process. This chemical is also in the larva”s body. When disturbed, they start to bleed from their knee-joints. The Canthraidin chemical irritates the urinary tracts and digestive system and may cause death, especially in horses. This chemical affects the intestine and can cause dehydration, sweating, diarrhea, colic, depression, straining and inflammation. This poisonous chemical keeps them safe from others. In some culture”s folk medicine, the Blister beetle”s extracts are used as an aphrodisiac.

The life cycle of blister beetle is Hypermetamorphic. The larvae are parasitic and they feed on the eggs of bees and grasshoppers. With many different larval forms, its life cycle is complex. The larval stage occurs during the winter season and the pupal stage occurs in in spring. The pupal stage remains for 2 weeks and the adult appears in the early spring season. The larval stage develops in about a month, but the last but one stage can last for about 230 days before molting to the sixth larval stage in the spring season.

Adult blister beetles feed on the leaves of the plants, but they are also attracted to flowers where they feed on nectar and pollen. They also eat beans, peas, turnips, tomatoes, potatoes and also flowers of the plants. The larval stage feeds on the eggs of grasshopper. Adult beetles can eat the apple trees. They also feed on garden crops such as carrots, melons, cabbage and eggplants.

Female Blister beetles lay their eggs in protected areas such as under stones in the late summer season. The small and active larva hatch from the egg over the surface of the soil. The newly hatched larva need grasshopper egg pod. The larva become immobile and spends the rest of their time as legless grubs, until it find the egg mass of grasshopper. The female beetle lays 3000 to 4000 eggs. Because of their complicated life history, few of them survive. The beetles from the Nemognatha genus are not known from any common name, but are very commonly seen. Nearly 30 Blister beetle species have been seen in North America. Most of them possess long mouthparts that are used for extracting flower nectar, similar to the butterflies. The black or rusty orange beetles, mostly visit thistles, sunflowers, and other Aster family members. This beetle deposits eggs over the flowers. The unique behavior of Blister beetle is that during the larvae form, it grabs a solitary bee wandering nearby, and migrates to the bee nest to feed on the eggs, larvae or honey in the nest. The Iron Cross beetle species from the Blister family is generally considered as a pest. Though they do not intentionally harm human beings, they attack the alfalfa fields. It is again a dangerous beetle for predators as it contains high rate of Cantharidin toxins, hence most predators avoid preying on this beetle. It is widespread all over the world, except in Antartica and New Zealand. These beetles are found in a large number during the spring, They migrate together in groups by running or crawling across the fields or grounds. they mainly eat succulent flower petals and leaves. The larval stage of this beetle is highly subterranean and mostly acts as a parasite to the other ground nesting bee”s nests. The conspicuous coloration of the Iron Cross Blister beetles is the main sign of their poisonous nature.

Blister beetles are the largest beetle to be found in Alfalfa. Epiculata, which is the largest genus include several species that horses find toxic, so much so, that if a horse consumes a few of these bugs, while feeding on alfalfa, it may be the end of them. Handling this insect may cause burns in fingers and hands.

Please read a brief paragraph on some other Blister Beetles, which may be regarded as important