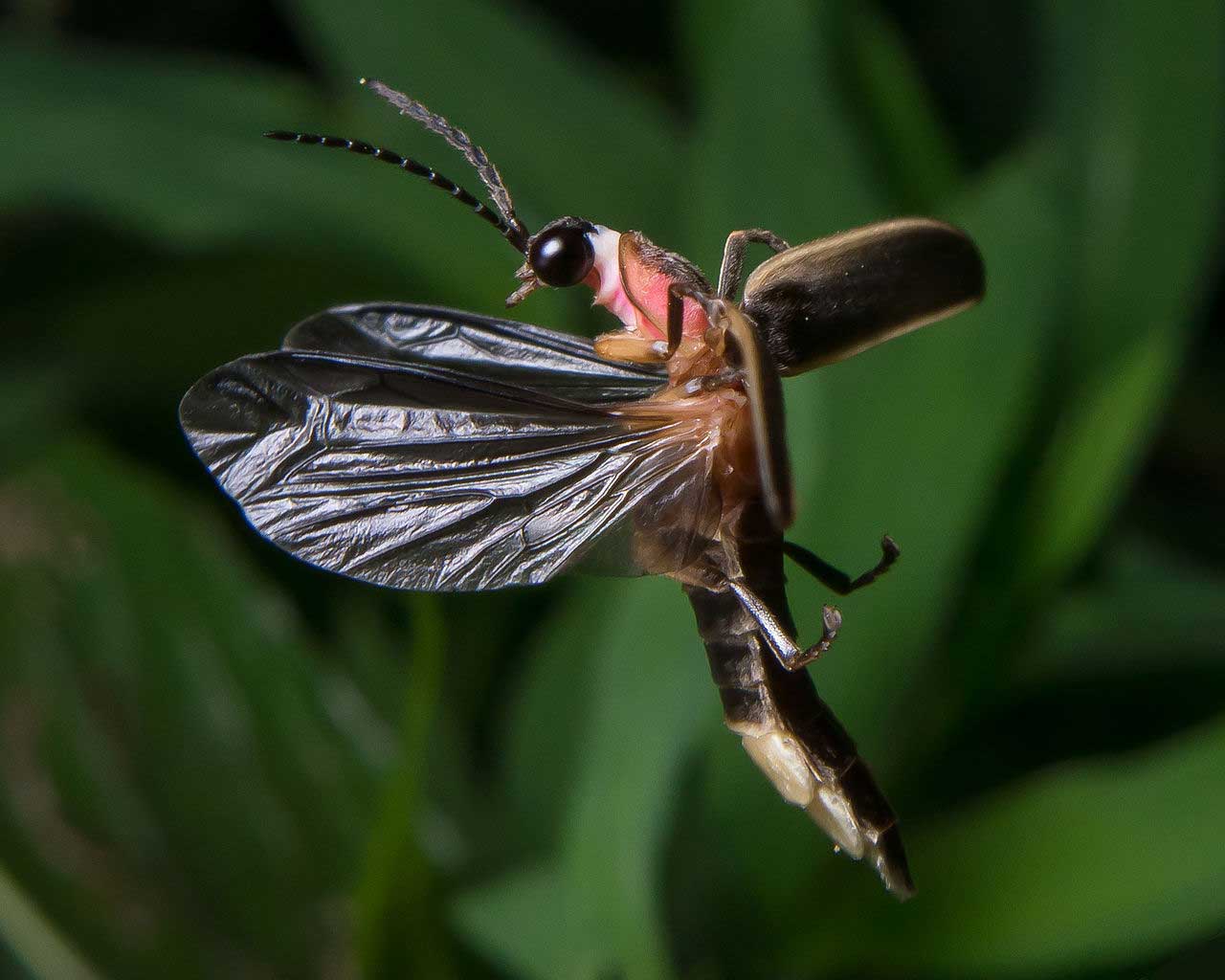 The beetles from the Photinus genus are commonly known as the “rover fireflies” or “lightning bug”. They are the members of the Lampyridae family and Lampyrinae subfamily. The Tennessee state insect, the common eastern firefly, biologically known as photons praise belongs to this genus.
The male Photinus bug displays a pattern of flashing light, which is a signal to the female beetles. But it also leads to a trap, as the signals may be received by the female Photuris species, and they attract the males displaying deceptive signals, in order to eat them.
The typical species of Photinus genus are the “lightning bug firefly”, instead of “glowworm firefly”, as it displays light during the winged stage. Even for mating, the adult male and female produce signals to attract each other by producing lights with the abdominal organs that are known as “lanterns”. These beetles are commonly termed as “rover fireflies”, because usually the male beetle of this genus hover alone, and not in a batch or group.

The genus Photinus has many species, out of which the following are the selected ones-:

This species form the Photinus genus is a type of beetle that displays synchronized flashing lights, which has fascinated both the tourists and scientists. A unique wave of bright lights as well as darkness travel over the landscape in an alternating way, when the female and male synchronize together. This firefly occurs typically in the beginning of the June in areas like Elkmont, Tennessee, situated in the Great Smoky Mountains National Park

The Photinus carolinusspecies were the first one in North America to display the flashing behavior with synchronization. The male displaying this flashing behavior is common in the southern parts of the Asian continent. In such areas, the male fireflies are said to collectively perch on trees, and create a display of synchronizing flashing lights.
The flash timing of such beetles depends on the variation of temperature, but in the male P. Carolinas species, the flash timing is typically between four and eight bright flashes in every 2-4 seconds. Then a darkness of 8 -12 seconds is followed. The reply from the female beetle is less bright, and it occurs as a single pulse during the male beetle”s dark period. The Photinus Pyralis species of beetles are commonly termed as”Common Eastern Firefly” or”Big Dipper Firefly”. This firefly is very common in North America and has the ability to produce light, due to which it is referred to as fireflies. In this species, the light is produced by the organ situated on the abdomen”s ventral side. In the male beetle of this species, the light organ conceals the whole three posterior segment”s ventral surface, whereas in female beetles, it conceals only the third posterior segment”s portion. They are mostly found around twilight in the early evening. The flash synchronization and timing depend on the light condition.

In this species, the male beetle first starts the light flashing behavior to locate, and gives signals to the female mates. They also can fly while flashing the lights, whereas the female at that time stays inactive. The male continuously flashes the light in each 6 seconds, and wait to view the responding signal, whereas the female flashes around 1 to 2 seconds later. The female beetles are specific while responding to the signals, as they give receptive signals to their Conspecific (dissimilar) mates, which they can identify with the flash color or the duration and intensity of the flashlight.

Some Amazing Facts About Fireflies

Fireflies, though small in size, are neither bugs nor flies, but are beetles that have the typical hard forewings termed as “elytra,” which joins as a straight line at the down side of the back, when they are at rest.

When in flight, these insects use their stretched “elytra” for balance, and depend on the hind-wings, for the actual movement. This feature has placed them in the Coleoptera order.

The light producing mechanism in fireflies is very different from an original light bulb. A light bulb emits only 10% of its energy as light, and gives the other 90% as heat, which cause our hands to burn when we touch a bulb that is on for some time. Such mechanism in fireflies would have incinerated them to produce the light. They actually undergo a chemical reaction in their body that produces light, without wasting their energy into heat.

Fireflies of all stages are Bioluminescent, and can produce light or glow. As we usually see this creature only after it attains maturity, the features of the other stages are not commonly known. In the larval stage, the light in their body is used to warm the predators, and in the egg form, they display a light glow, when disturbed.

There are also many adult species that do not necessarily flash, like the ones found in the western parts of the Northern America. Hence the people mistakenly believe that there are no fireflies existing near the western part of the Rockies, but actually, the adults prefer some other ways to communicate with each other instead of using flashlights. Most species of fireflies are known as carnivorous and feed on small insects like flies, ants and other soft bodied animals. But out of this, they mostly prefer snails, which they get from their marshy and moist habitat. Some other species are arboreal; they feed on the tree snail.

The female adult fireflies of some species are very tricky and trap the other firefly species. They mimic the flash pattern of a male firefly that belongs to other species, which is in search for its mate. The receptive signals given by this female firefly attract the male towards itself, and as it reaches nearer, the female firefly eats him.

The Luciferase (generic term for the class of oxidative enzymes used in bioluminescence) of fireflies is very useful in the science lab. Researchers have found that it is the best marker used to detect any blood clot, or to check the level of hydrogen peroxide in living creatures or to check the cells of tuberculosis.

Fireflies are not a good food for their predators, as their blood contains Lucibufagins, a defensive and strong steroid that has a filthy taste. Hence some studies have also found that the glow light is actually a warning to their predators to beware of the lightening bugs.

Some species of fireflies are aquatic in nature, and live under water. The larvae have gills, suitable to live in an aquatic habitat, and they primarily feed on the snails found under the water

The lifespan of an adult firefly is very short. They live to mate and lay eggs for the next generation.. But the larvae stage extends for a period of more than one year.