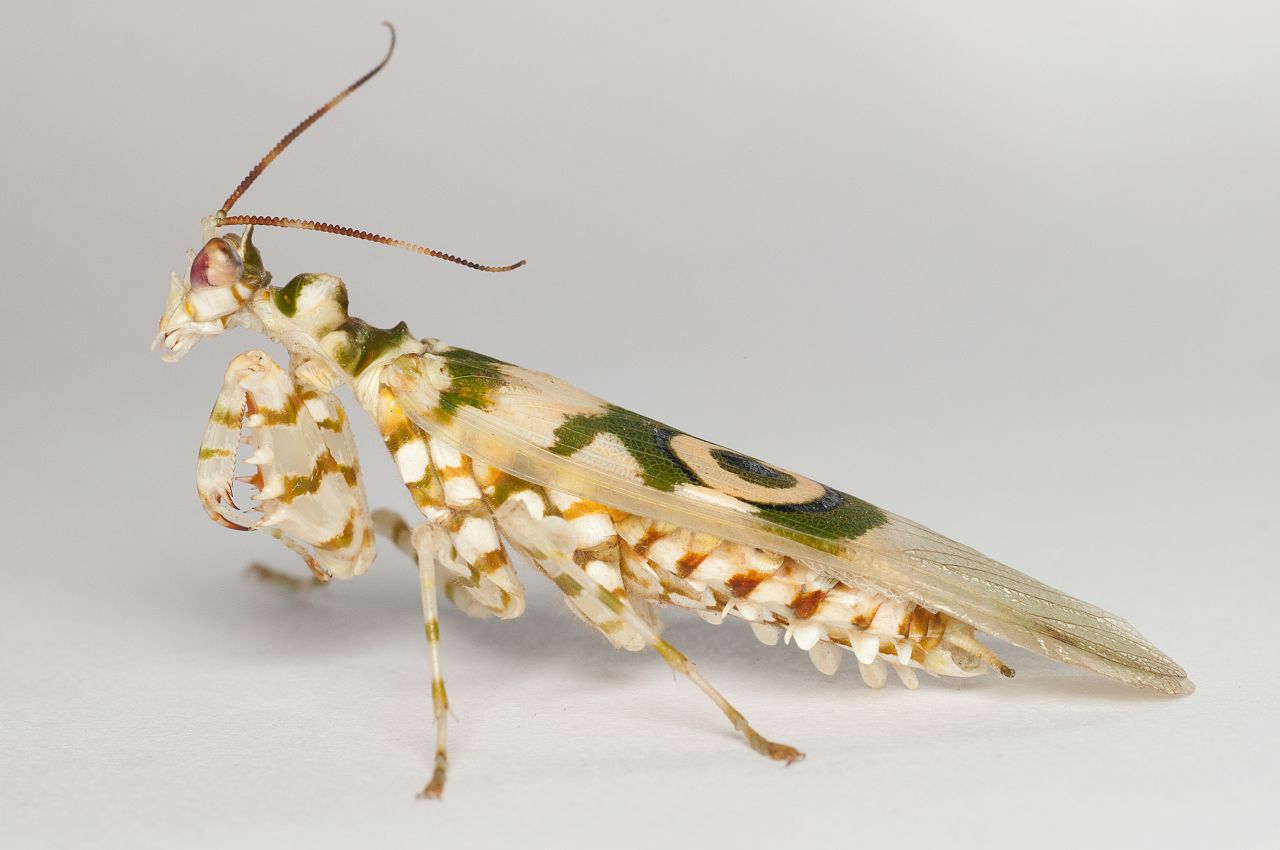 Purchase your LIVE Spiny Flower Mantis from the Praying Mantis specialists! Many mantis types to choose from, live arrival guaranteed.

The spiny flower mantis or Pseudocreobotra wahlbergii, a native of Kenya is a small and very attractive flower mantis. This stunning and colorful insect is definitely a treat for the eyes as it displays a variety of colors on its body and wings. The bottom of its abdomen has a spiny appearance and hence the name Spiny flower mantis. This is an insect that is very easy to rear and hence is a favorite pet species among hobbyists.

The spiny flower mantis is white in color with green stripes on its legs and colors ranging from light brown, to red, to green, to blue, and combination of these colors on its wing cases. The nymphs of this species have an orange colored spot on the upper part of the abdomen that resembles an eye. As the nymphs grow into adults and develop wings, you can observe a unique black and yellow spiral pattern on the wings that also mimics an eye. The various colors on the wings of the mantis are prominent only when they become adults. The newly born nymphs are black in color and retain this color until L3 instar stage. With each subsequent molt, their color becomes more and more white.

This mantis is fairly small in size growing to approximately 4 to 5 cm in length. Like all other species of mantises, the male is smaller than the female. The male also happens to be thinner than the female. As usual their sex is determined from the number of segments – 8 segments on the male abdomen, and 6 or 7 on the female abdomen. The wing case of the female is characterized by small and rubbery spines along the edges. The males however lack this feature. Both sexes have antenna, of which the male’s antenna is slightly longer than the female’s.

The spiny flower mantis is generally a calm and quiet insect. However, if threatened, it will try to frighten away the predator by positioning its wings upwards and showing the two eyes on them. They can show aggressiveness while hunting down its prey. They sit still and wait for their prey to come near them. Once the prey comes close by, the mantis attacks it ferociously. The spiny flower mantis is a not a communal insect and exhibits cannibalistic behavior when kept together. Since the spiny flower mantis is from Africa, they do best in fairly high temperatures in the range of 25 to 30 degrees C. This temperature can be provided by using a heat mat. Extra heat is not needed in summer but it is a must in winter. At night the temperature can be reduced to about 18 ° C. These insects do not have high humidity requirements. The ideal humidity level is about 60%. Spraying water around 2-3 times a week is good enough to provide adequate moisture and humidity. Make sure to avoid too much moisture, as it may lead to the formation of molds, which is unfavorable for the proper growth and life cycle of the mantis.

Just like all other species of mantis, the spiny flower mantis also requires an enclosure which is thrice its length in height and twice its length in width. This is a mantis that is highly prone to fungal and mold infections and so the enclosure should have proper ventilation. In order to replicate its natural habitat provide twigs, leaves, fake plants, and flowers. This mantis will sometimes sit in the same place for hours and even days. Substrate like soil, coconut fiber, or peat moss can also be provided in the enclosure, although it is not very essential. Do not make the enclosure too big because it would be difficult for the insect to find its food. As mentioned earlier, the spiny flower mantis does not go around hunting for its food. Providing a mesh or net lid will allow the insect to hang upside down while molting. Since they are cannibalistic, group housing these insects is definitely not a good idea.

The spiny flower mantis mostly prefers to eat flying insects. Young ones or nymphs can be given fruit flies, pin head crickets, and other small insects while adults can be given crickets, roaches, moths, locusts, mealworms, houseflies, and other flying insects. Take care not to offer poisonous insects, bees or wasps because these insects may turn out to be harmful to your pet. This mantis, being highly voracious will finish off their food fairly quickly. However, once you notice that their abdomen has become large after food intake, stop feeding them. This insect will usually get sufficient fluids from the food they eat. However, it would be a good idea to spray the walls of your pet’s enclosure a few times a week. The mantis, if it needs water will drink off from the tiny water droplets from the walls of the cage.

Breeding your pet spiny flower mantis is not a very easy task, because the female of this species exhibits sexual cannibalism. Make sure that she has been fed well enough before introducing the male into her enclosure. Otherwise there is every possibility that you won’t see much of the unfortunate male mantis ever again. The female can become very aggressive, attack the poor guy and eat him during or after mating. It would also be a good idea to feed the female during the mating process, as this may fix her attention on the food.

The male can be introduced into the female’s enclosure 2 or 3 weeks after the last molt. After mating, the male will run for his dear life to avoid being eaten by the female. The female lays her eggs in a foamy mass called ootheca. The ootheca must also be kept in the same temperature and humidity range as the adults are kept in. Around 30 to 55 young ones can hatch out from a single ootheca. These young ones or nymphs can be given fruit flies to eat. They may also feed on their siblings. As with all other mantis species, the spiny flower mantis also molts several times before it becomes a fully grown adult. Females generally molt 7 times whereas males molt 6 times throughout their life span. Your pet mantis will hang upside down from a branch, twig or the net lid during this process. It is very important that you do not disturb your pet while it is molting and also do not offer any live food at this time. Not only is your pet going to eat this food, but there is also the great danger of the live food taking advantage of your mantis’s vulnerability and killing it. The mantis will resume eating a few days after the molting is complete. Do take care to maintain the desired humidity levels to ensure a proper molt.

The spiny flower mantis is an interesting and fun mantis to keep as a pet for both beginners and experienced hobbyists alike. This spectacular insect is very easy to rear and makes a great addition to anyone’s collection.