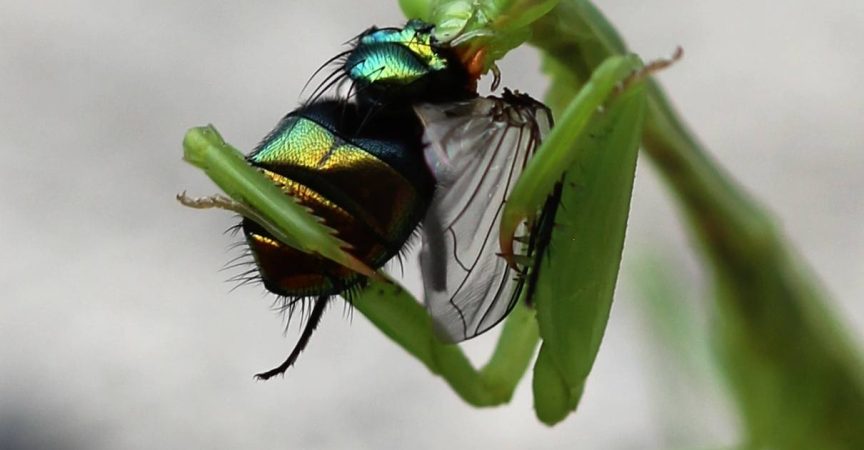 The African Mantis, belonging to the Sphodromantis genus is the common name given to a large species of praying mantis commonly found in Africa. It can be found perching on trees and bushes, and use its great camouflage skills for defense and hunting. It is an attractive creature that is very less demanding and relatively easy to look after, and hence makes a great pet. In fact it is one of the largest species of praying mantis that is being successfully kept as a pet.

The African mantis is not a very large or colorful mantis. It is usually green in color, but it can also be seen in brown and cream varieties. The females are larger than the males and can grow up to 8 cm, with wings that extend only till end of the abdomen. The males reach a maximum of 6 to 7 cm and because of this shorter length the wings are slightly longer than their body. Another way to differentiate between a male and female is by counting the number of segments on their abdomen. Males have 8 segments on their abdomen whereas females have only 6 segments. Both sexes are characterized by a white spot on their wings and a yellow coloring on their inner foreleg and this is a feature that is unique to their species.

The African Mantis is generally a docile and calm insect. However, this behavior can totally change when it comes to feeding. While feeding it becomes a rather aggressive type of praying mantis. Once it has spotted its prey, the mantis will vigorously go after it and chase it down.

Temperature plays an important role in the proper growth of these insects. The ideal temperature to be maintained during the day time is between 77-86F whereas the temperature should be allowed to drop to between 70-75F during the night. It is important to maintain the right temperature because higher temperature may shorten their life span while lower temperatures can slow down the metabolism and lengthen their life span. The African mantis can tolerate varying levels of humidity, but it would be ideal to maintain a moderate humidity level of between 50% – 70%. This can be achieved by spraying the enclosure twice weekly. This will not only provide the required humidity but also allows the mantis to drink from it.