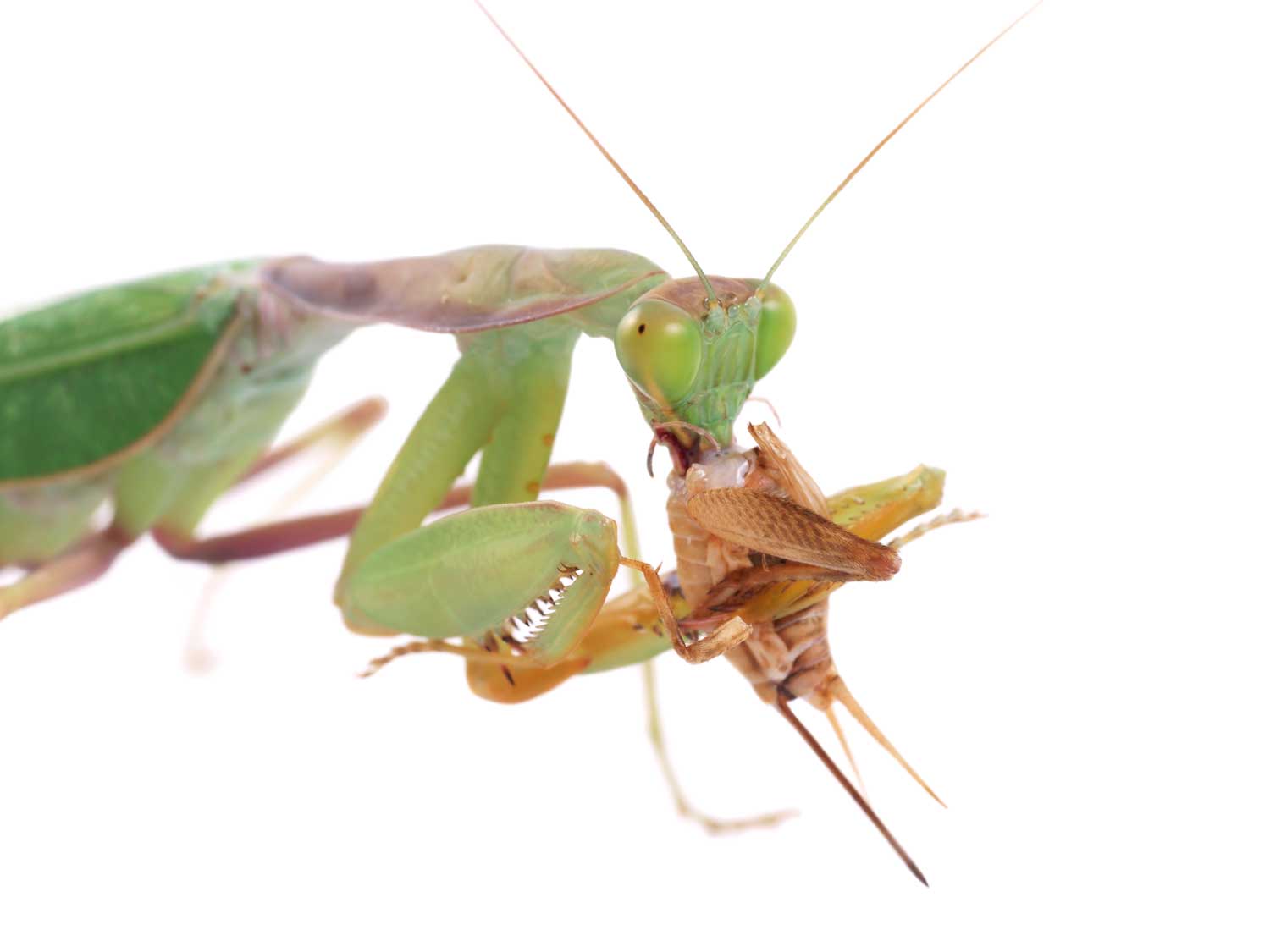 Article with cool pictures about what do praying mantis eat. Does a mantis eat just bugs? Find out here!

The praying mantis is an insect belonging to the order of Mantodea that contains over 2400 species and 430 genera. Their normal habitats are temperate and tropical zones. Even though in English, most species in this order go by the name, “praying mantis,” in Europe it refers to only a single species called Mantis religiosa. This insect got its name from holding its huge front forelimbs together in a prayer like posture.

Devoid of a larvae stage similar to other insects and blessed with a lifespan of about 12 months, this diurnal (active in daylight) insect grows to lengths of 3 to 4 inches, which is quite long for insects. The long and spiked forelegs facilitate ample movement to catch and securely hold the prey. It can turn its head each way by 180 degrees, facilitating a better view. These insects, though ferocious looking, do not bite, are docile by nature and earn an excellent reputation as a pet. One cannot stop his fascination for this mantis that laid the foundation for the quick development of several Chinese martial arts systems like the Seven Star Praying Mantis Kung Fu that draw upon the predatory techniques of the praying mantis.

These insects mate in the fall and at this time, it displays a weird incident of sexual cannibalism, when the female mantises rip off their male sexual partner’s head and continue the intercourse, while starting its meal of the male. Very little to wonder, “What do praying mantis eat,” is it not?

When you consider what do praying mantis eat, you come across an exclusively carnivorous insect; its feed comprising of a diverse range of insect species, which include grasshoppers, flies, mosquitoes, butterflies, beetles, bees, dragonflies, and the like. The larger mantises also prey on small frogs, rodents, lizards and birds. The sophisticated camouflage adopted by these insects helps them enormously in the hunting process, which is fast and efficient when the prey comes within the range of its flexible spiny legs.

Hobbyists rearing praying mantis as pets must make sure that they learn, ‘what do praying mantis eat,” and arrange the proper kind of live food that enhances their nutrition. Feeding a live mantis in captivity is not difficult. However, make sure that you feed them well, failing which, the female mantises may revert to their cannibalistic tendencies on the unsuspecting male.