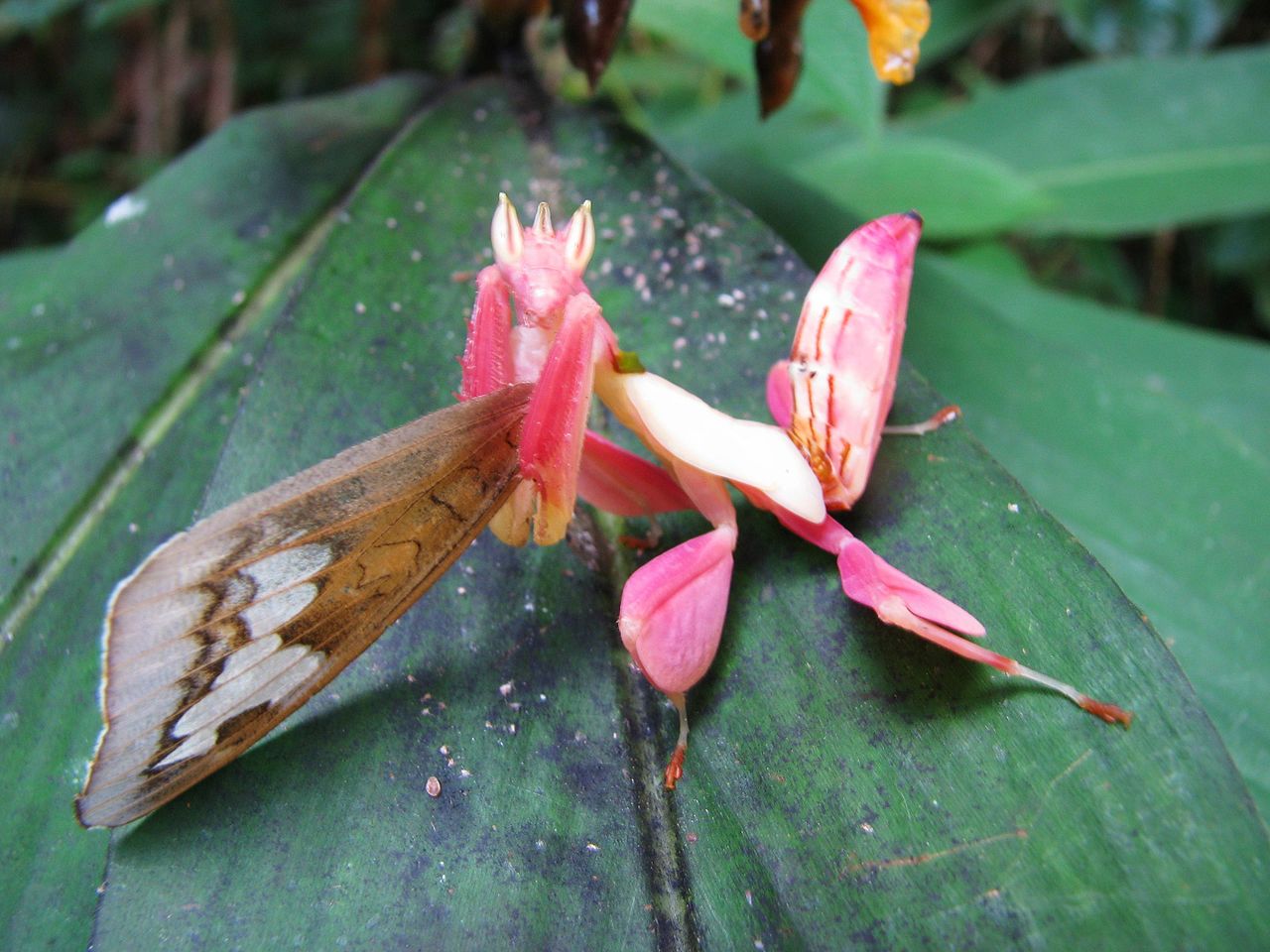 Orchid Mantis Care Sheet: Buy your Mantis from the Mantis Specialists! Many mantis types to choose from, live arrival guaranteed.

The orchid mantis (Hymenopus coronatus) is a stunning insect which is a perfect example of evolved camouflage. This insect, which is also known by quite a number of common names such as Malaysian orchid praying mantis, Malaysian orchid mantis, and Pink orchid mantis, comes from Malaysia, Indonesian, and Sumatran rain forests. The moment you see an orchid mantis, you will be instantly attracted by its beautiful and radiant colors which usually mimic the surroundings in which they are observed. The most common coloration of this species includes white, pink and purple though occasionally yellow and lime green colorations can also be found. Its legs have semi-circular lobes that resemble the petals of a flower or orchid, and hence the name, orchid mantis. Because of its exotic and captivating beauty, many people keep this insect as a pet.

The orchid mantis is characterized by colorations of white, pink or a combination of both. It is capable of changing its color depending on environmental factors such as light and humidity. It has semi-circular lobes on its legs that look like flower petals. This insect is commonly found among flowers in bushes and small trees. Its peculiar shape that resembles a flower provides the best camouflage in such a habitat. In this way, the mantis can remain undetected by predators such as birds, lizards, bats, rodents etc. This amazing camouflage also helps the insect to easily catch its prey without being seen.

The male and female orchid mantis differs both in their size and appearance. An adult male mantis is about 2.5 cm long and is smaller in size when compared to a female mantis which is approximately 6 to 7 cm long. Males have pink-orange body with long white wings whereas females show variation in their color. While the female mantis has a green colored spot on her back, the male has a brown colored spot. Another difference is that females have large lobes on their legs whereas in the case of males, this lobe is almost absent.

These insects have the reputation of being extremely docile and calm. When threatened, they either try to scare the predator, or confuse it by flattening themselves and assuming the shape of a flower. The orchid mantis is a species that requires high humidity (around 60 to 80%). Humidity can be increased by spraying the enclosure once a day. Although the ideal temperature is about 28 ° C, it can be varied between 25 ° and 35 ° C. If you want to mate a male and female mantis, it is essential to alter their growth rate. Since males grow faster than females, you need to slow down the growth of the males by keeping them at a cooler temperature of about 15 to 18 ° C.

This species should be housed in an enclosure that is at least three times the length and two times the width of the mantis. The ideal habitat to provide will be a screen cage. Such a cage not only helps the insect to climb the mesh walls but also will provide adequate air supply. The cage should have substrate such as peat moss, soil, or coconut fiber in order to maintain the high humidity level. Setting up plants, branches, or vines in the cage will help the mantis to feel at home by making the cage resemble their natural habitat. Do not keep more than one orchid mantis in a single enclosure because there is the likelihood that one mantis may feed on the other. So if you have many mantis of this species, keep them in individual enclosures.

The main diet of the orchid mantis includes insects such as flies, moths, butterflies, and other non-venomous flying insects. They are also known to feed on larger preys such as lizards, mice, and frogs. The mantis does not hunt by going after its prey. Instead, it stays still waiting for the prey to come close enough so that it can grab the prey easily. Although carnivorous by nature, these insects also enjoy small portions of banana. Owners of pet orchid mantises usually feed them flying insects such as house flies, fruit flies and moths. A female mantis lays her eggs in clusters called oothecae. These eggs usually hatch after five or six weeks. The newly hatched young ones are orange and black in color, which gradually changes to pink after each molting. Males molt only five times throughout their life span and they live only for 5 or 6 months. Females on the other hand molt seven times and have a longer life span than males, about 8 months.

The orchid mantis shed their skins as they grow and this is usually done by clinging upside down. It refrains from taking any food for one or two days before the molting process. It is important to ensure proper humidity level for allowing the insect to molt properly.

Taking care of your pet mantis is a pretty easy job. All you need to do is to provide the right living conditions and feed them correctly. Although for pet enthusiasts, this is one of the most favored species of mantis, it is rare and can be rather expensive. Breeding them in captivity is a very difficult task, since the female may attack the male and eat him. Therefore, it is important that the female be well fed before and during the mating process. If you are looking for an exotic pet that is less demanding and easy to take care of, then the orchid mantis is the right choice for you.