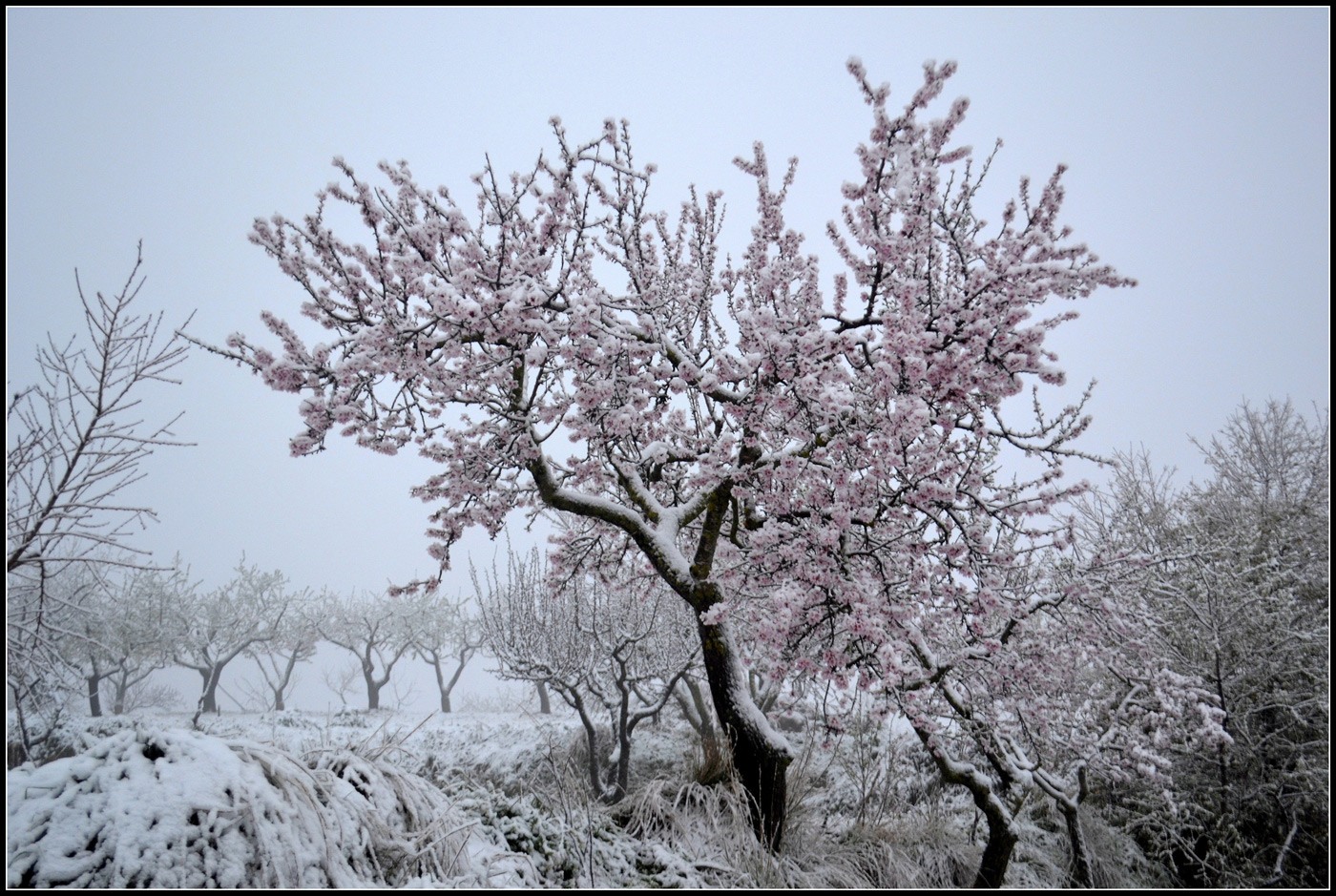 The Almond is botanically described as Prunus dulcis. syn. Prunus amygdalus. Amygdalus communis. Amygdalus dulcis, Indianized as Badam, or in Persian: بادام‎). This tree is indigenous to South Asia and the Middle East. This tree bears an edible seed named “Almond” which is harvested in most of the places. The almond tree which is of the Prunus genus, belongs to the classification of peach which is of the subordinate type of Amygdalus, quite different from the additional subgenera on accord of its corrugated shell called endocarp, which envelops the seed.

These Almonds, obtained from the Almond tree, are nutritious and delicious. They are also associated with the apricot, peach and several stony fruits. Growing the almond tree is perhaps fussy.

Cultivation of the almond tree began in the 4,000 B.C., they are indigenous to South and central parts of Asia, and Almond was established in the 1840’s in California.

Almonds or Prunus Dolcis is costly for it is an essential constituent in baked items, candies and in confectioneries. Also oil is obtained from its nut. This stone fruit obtained from the almond tree has its reputation, because it has several remedial uses, such as treatment of cancer, ulcers, corns, etc.
Anatomy

This deciduous almond tree grows as high as 4 to 10m (13 to 33ft), its trunk is of diameter measuring 30 cm (12 in). The tender branches are initially green in color, and when exposed to light they turn purple and finally turn gray in the next year. The length of the foliage is around 3 to 5 inches with saw-like edges and petiole 2.5 cm (1 in). The blossoms are of diameter 3 to 5 cm (1 to 2 in) and there are five petals in a flower, they grow either as a pair or are single, the flowers emerge prior to the foliage at the beginning of spring.

The length of an Almond fruit is 3.5 to 6 cm. Botanically, we call it a drupe and not a nut. The cherry or the plum has fleshy coating, but the almond has a covering or exocarp that is like leather, thick and greenish gray (having a silky covering), known as the hull. In the interior of the hull there is a hard, reticulated woody shell (similar to the exterior of a peach pit) named endocarp. The edible seed is within the shell, which we call nut. Normally there is only a single seed, but occasionally, two are seen.

The almond tree is an inhabitant of the Middle East, Mediterranean weather conditions, and extending up to the Indus. In the earlier days the human beings spread them along the Mediterranean shores to the south of Europe and North of Africa and recently, carried them to several parts of the world, particularly the United States and California.

The Almond trees are of two varieties “sweet” growing almond trees and “bitter” growing almond trees. It is not safe to consume the bitter almonds because they possess prussic acid, which is a chemical poison. A hand full of these fresh bitter Almonds will possibly lead you to death. But still there are methods of processing them by means of a particular toxin-leaching method, which makes them edible. Apart from bearing fruits, almond trees require good techniques in nurturing, if not it will face difficulties in surviving.

While growing almond trees, one should be aware of the fact that this tree will not survive if the soil is soaked with water, and they are prone to frost in the spring. The almond tree flourishes in when the winter is wet, mild and in the summer when it is dry and hot, with bright sunshine. In case your district does not meet these conditions, it is doubtful that your almond tree will blossom for you.

The roots of the almond tree penetrate into the soil, as such, it is necessary to plant them in soil that is fertile, deep enough and properly drained and loamy. Plant the almond trees at distances of 19 to 26 ft from each other, even though the trees tolerate drought, watering is necessary. Growth of the tree is enhanced by supplementing it with organic fertilizers and nitrogen. The almond tree requires good quantity of nitrogen (N) and Phosphorous (P).

Be certain that the site you selected is right for growing the almond tree. The almond trees, that are indigenous to the dry and hot environment of Southern Asia and the Middle East, grow well when the weather is mild in winter and hot in summer. They will not survive in other conditions. Normally an almond tree fails to grow when the climate is too cold. If not, you must provide a cautiously restricted interior system. You are likely to face difficulties when you grow almonds exterior in the regions where the Mid-eastern and Mediterranean climates prevail.

In order to plant an Almond tree, make a hole of a depth smaller than its width. Ensure that the roots are positioned in the hole with ease, and then supply water intensely. In case you reside in a breezy location, then give a support to the small tree; however, take away the support after around a year in order to provide better development.

Do not water your almond tree in excess in order to avoid the roots from decaying. An issue that we come across in every tree (inclusive of almond tree) is root decay. This danger is primarily due to the fungi that begin growing on the roots of the trees when they have contact with water for prolonged periods. It is better to prevent root rot, because treating it is a tedious job. In any case do not exceed watering your tree- whatever way you water your tree, if water stands along the base of the tree it does greater destruction rather than any benefit.

Almond thrives well in the Mediterranean type of climate where they have dry and warm summers and wet and mild winters. The most preferable temperature for the flourishing of Almond is 15 -30°C (60 to 85°F) and the buds of the tree require for 300 and 600 hours of chill temperature of 7.2° C (45 °F) in order to split it inactiveness.

Its fruit ripens 7 to 8 months following blossoming, that is in the autumn season.

Nurturing your almond tree will vary in accordance with the seasons. In the latent or the winter season, the developing almond trees require pruning (December and January) to induce its growth, discard suckers or limbs that are diseased or dead, let in sunlight. Do away with the trash in the region of the tree in order to avoid excess wintering navel orange worms. At the same time squirt dormant oil to destroy mite eggs, of San Jose scale as well as peach twig borer.

In the spring season, when they bloom caring for almonds comprises of fertilizing the grown up trees with manure or urea, watered with little amounts of nitrogen for growing trees. Begin to irrigate your trees with drip irrigation every day for the recently planted trees; they require 2 to 3 inches of water. Water your matured tree weekly with 2 to 3 inches of water when it does not rain and it also requires extra watering in the arid periods. In addition, in case the tree is positioned in sandy or shallow soil, it requires additional watering.

In the summer season, carry on fertilizing and irrigating in the same manner till the spring season and till you harvest them.

The navel orange colored worm is the particular pest that aggravate the almond. During the winter season, this particular pest takes shelter in the nuts called “Mummy,” especially Those Almonds that are not harvested and remain on the tree at the end of fall and in winter. In the next spring, these almond roots out, become energetic, and start to damage the yield of almond. The only method of avoiding this is to remove the mummies and give them no space to take shelter in winter. Avoid these orange worms from appearing, since they will not yield good fruits in the future.

There are tiny insects like the grub that penetrate inside stone fruits like the Almond and peach; they resemble peach twig borers. These pests are liable to endanger the almond harvest, by their feeding on it; therefore, in case you happen to notice these pesky bugs (or if you notice chewed up leaves, which are symptoms of their presence), at once apply some pesticides to avoid damage to the crop. The best option is to go for Bacillus Thuringiensis, which is a bacterial insecticide, it kills the borers. July to October, when the fruits get dry and crack open, is the time when Almonds are harvested. Jerk the tree and collect the fallen Almonds. Be careful not to take the spoiled ones that you notice. At certain times the fruits drop even if they are not jerked. So long as they are fresh, they are edible.

Once you harvest your almonds, keep them in a freezer for 1 to 2 weeks in order to kill the remaining pests.

The time for harvesting the fruits of the Almond tree is subsequent to the splitting of the hulls and when the shell turns brown and are dried. Almonds require 180 to 240 days for their nuts to mature (embryo and shell) and are free of water content.
Harvesting is done by first jerking the tree, further removing the hull and separating the nut. After freezing the almonds for a week or two, when all the worms are dead, store the almonds in bags made of plastic.

In the final stage, Take care of your almond tree is by applying a spray, once the leaves are shed in the fall and before the coming of the winter rains; thus you are slowing the damage from the fungus in the shoot hole, during spring.