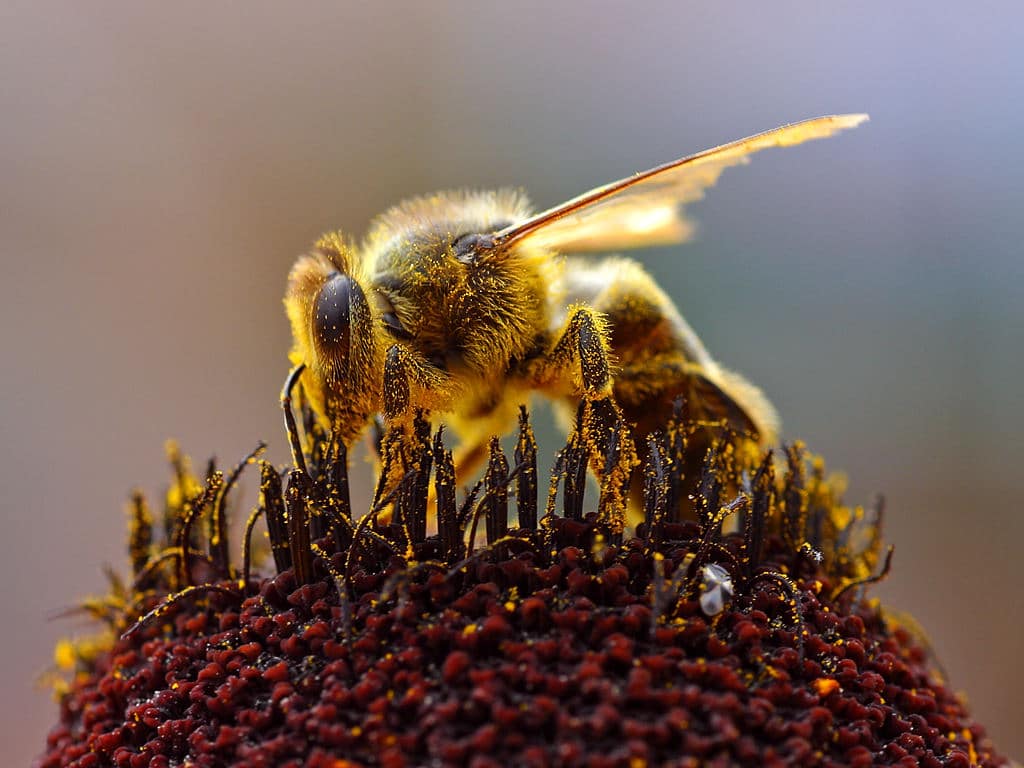 Honey bees (or honeybees) are a separate division of bees in the genus Apis, pincipally distinguished for its stocking and producing honey and making the colonial, perennial nests from wax. Among all the genus Apis, honey bees are the lone surviving members of the clan Apini. Presently you have only seven species of acknowledged honey bees along with an entire number of the 44 sub-species even though in terms of history, you can find 6 to11 acknowledged types. Of all the known varieties of around 20,000 bees, honey bees represent just a small fraction. Other types of connected bees also make and store honey, however, the real bees belong to the genus Apis. Agriculture to a great extant, relies on honey bees for pollination. Honey bees account for 80% of insect pollination. Without such pollination, the yield in vegetables and fruits are likely to witness a noticeable decrease.

The pollen collected by bees in a year for one hive is 66 lbs.For the formation of plant embryo and for fertilization, all flowering plants produce pollen, which is the male germ cell. Pollen is one among the purest and richest form of food obtained in nature, honey bees feed on them. Pollen consist of the following: 35% protein, 10% carbohydrates, minerals, sugars, enzymes and vitamins A (carotenes), B5 (panothenic acid), B3 (nicotinic), B2 (riboflavin), B1 (thiamin), H (biotin), C (ascorbic acid), and R (rutine)

Throughout the year bees use honey for food. Based upon the resource of the nectar, there are several types, flavors and colors of honey. Bees collect nectar from flowering plants and trees from which they prepare honey. Honey is a genuine food and easy to digest, it has anti-bacterial qualities and honey is hydroscopic. Consuming local honey wards off allergies.

The bees glands secrete beeswax. Honeybees use them for building their honeycomb. It is also used by human beings for furniture polishing, cosmetics, artists, drugs, materials and candles.

This sticky resin is collected by the honeybees from trees when mixed with wax, gives a sticky glue and the bees repair and seal the cracks in their hive with this. Human beings use them as the base of fine wood varnish and as a health aid.

This wonderful milky substance changes a casual bee into a Queen Bee. They produce it by mixing honey and digested pollen or nectar with a chemical secreted from the gland in nursing bee’s head. It is high-priced in comparison with the imported caviar, a few use it as a fertility stimulant and dietary supplement. It packs vitamin B.

The ‘ouch’ part of the honey bee: the natural reactions of a honey bee sting results in itching, slight swelling and severe pain. Some people are highly allergic to bee venom. Many people overseas and in the USA use “bee venom therapy” for taking care of problems related to health like neuralgia, high cholesterol, arthritis, high blood pressure and MS.

Other Interesting Bits of Information

The early colonists brought the honey bee to North America, these bees are originally from Europe and not native to the USA.

Honey bees are by nature not aggressive, unless excessively disturbed or for protecting its hive from an intruder, they will never sting.

Honey bees symbolize an exceedingly organized society. Each and every bee that occupies the hive has its own specified role to play through its life. For example, foragers, royal attendants, housekeepers, guards, undertakers, construction workers, grocers and nurses etc.

In honey bee colonies, the Queen Bee survives for many years, whereas the worker bee lives only for 1 ½ months while working hard a summer and for 4 – 9 months in winter.

Old cave paintings identify that the practice of bee-keeping and collection of honey goes back to the stone age. This process of honey bee hive is continuous. Even though during the winter they are quite inactive, they survive the during the months of winter by gathering themselves closely for warmth. These honey bees themselves control the internal temperature of the cluster and keep up the temperature to 930F in the center of the cluster during the winter (regardless of the outside temperature) In a single hive there is only one Queen. The honey bee with completely formed ovaries is the queen. This queen bee will survive only for 3-5 years. The queen bee mates though remaining fertile through its lifespan, mates only once, but with several male (drones) bees. In a day she lays as much as 2000 eggs. The unfertilized eggs develop into males (drones), and the fertilized eggs become females (worker bees). On the death of the queen bee after she becomes unproductive, the worker bees select a juvenile larva and feed it with “royal jelly” and “make” a new queen. It takes 16 days for a queen bee egg to hatch. All worker bees are females in spite of which they are incapable of reproducing. During the winter the worker bees survive for 4-9 months. But during the hectic months of summer (they literally work themselves to death) they survive for only 6 weeks. Almost all the bees in the hive are worker bees. In a hive there are more than 60,000 – 80,000 bees during summer and 20,000 – 30,000 bees during winter. During their lifetime the worker bees in turn take up a series of selected tasks: guard, grocer, nursemaid, undertaker, construction worker, nurse and in the end after 21 days they just become a wanderer collecting nectar and pollen grains. For the worker bee, it takes 21 days for the eggs to hatch. She can sting only once, she has a barbed stinger, and when she stings once, it ends in her death. The drone bees wait in a queue in the summer waiting to mate with a virgin queen. The drone, on account of its a barbed sex organ, dies after mating. In a single hive there are 300 to 3,000 drones. The stinger is absent in the drone, since they are useless in the winter. At autumn they are not allowed to enter the hive.

Two types of mites (Tracheal and Varroa) are the biggest threats to bee keeping. Even though an unrelenting bee keeper controls these mites, the negative effect on the honey bee affects the number of inhabitants. According to the survey conducted by the members of the The Back Yard Bee Keepers Association more than 40% of the membership’s hives collapsed in 1996. In the USA these mites cause a very big decrease in the honey bee population. Other than the harm that the mites cause to honey production, they have no effect on humans.

Beekeepers are on the search of diseases of different types that do not harm humans but exclusively harm honey bees. “Nosema” and “Foul Brood” are the two diseases identified. Proper management and good medication will eradicate these diseases.

With the increase in the growth and development of cities leading to urbanization, the foraging opportunities for bees decreases to a great extent. Despite this, places like Fairfield County has a rich collection of pollen and nectar for honeybees. The lush wooded countryside and the home owners’ gardens appear as a boon to the bees.

In certain southern states there arrived the so-called “killer bees” ; this generated shock news in the media. This false rumor has agitated theauthorities to pass ordinances and create local restrictions on the hobbyist bee keepers.

Please Read Some More Amazing Facts on Honey Bees Below