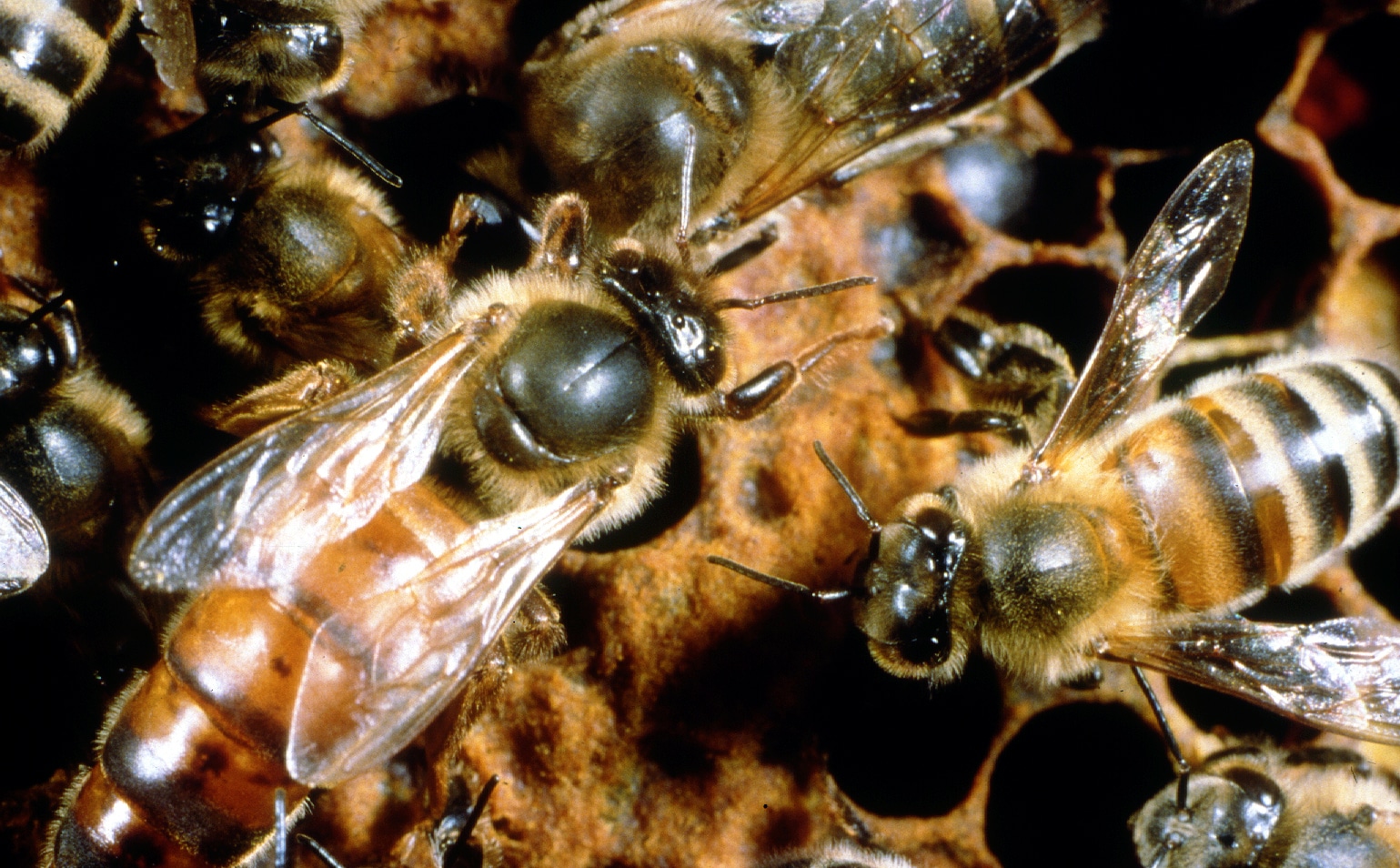 The adult female or the queen bee is the center of the beehive or the honey- bee colony. She is the mother of most of the bees, residing within the colony and almost everything happening in the colony is responsible to the queen. If the queens of a bee colony, borne out of the larvae, and chosen by the workers are healthy and of good quality, the bee hives remain well protected and productive. Usually, there is one sexually fertile large adult queen in a hive at a time, which all the worker bees specially feed and protect.

The most vital tasks of the queen bee are laying eggs, and generating chemical scents, which will help in maintaining the bee colony unity. As soon as the queen finds favorable conditions, she starts laying eggs in the cups every thirty seconds like a machine, generating about 1,500 eggs per day. A special secretion from the head glands of the worker bee, rich in protein called the royal jelly is the exclusive food for the larvae fertilized by the new queens. All the honeybees get a limited quantity of royal jelly as soon as they hatch, but the queen bee gets a special diet, so that she turns sexually more fertile than the other bees. As the larvae of the queens gradually mature with her head facing downwards, the workers tend to wrap the cell with the wax, which the virgin queen will chew open like a hinged lid. With the breeding season approaching, the aged queen will empty the swarm for the replacing queen.

A virgin adult queen is one who is sexually fertile but has not yet mated with a drone. A virgin queen is one who is more active than the aged queens and is medium in size. While examining a beehive, it is very difficult to locate the virgin queen bees, as they travel across the comb, crawl over the workers, adhere to the walls or even fly away if they feel disturbed.

The young queens have limited pheromones, and the other members of the hive do not accept them as original queens. After a few hours of birth, they may relocate into the hive’s entrance, and the workers instantly accept them because the hive does not have a queen. In this process, they label the older mated queen as an intruder, and consider her suitable candidate for assassination.

As soon as the virgin queens come out, they immediately aim at removing the rivals, by stinging the other would-be queens or the bees that have not yet emerged. If you see the queen cells cut open in the sides, it means the rival virgin queen has attempted to kill the other would be queens. When a large troop leaves, the workers remaining in the colony might restrict the would-be queens from fighting, while some of them might leave after the swarms. You can find up to twenty-one queens in a large swarm. With the settling down of the after-swarm in new hive, the remaining virgins fight with each other till only one queen survives. The old queen, lives with the virgin queen in the prime swarm, and continues laying eggs. With her natural death, the virgin queen will replace her, after mating. The queen bee has a strong stinger, which enables her to sting consistently, without dying.

If there are several virgin queens in one hive, they often make a noise during their development phase. It signifies a battle announcement towards the rival bees, and their urge for fighting or a signal for the workers to support the queens.

The developed queens tend to vibrate and make noises like “quack” from their queen cells or “toot” from the free queens in the colony. The virgin queens often pipe before and after emerging, and the mated queens can pipe after release inside the hive.

The ultimate queen flies out to the “drone congregation area” on an unusually warm day, to make with 12-15 drones, and will continue doing the same, if the weather condition persists and until she mates fully.

The youthful queen can store about 6 million sperms in spermatheca from numerous drones, during mating in flight. She releases these sperms for the rest of her life; 2-7 years.

In case the weather condition does not favor mating, and the young queen is unable to mate fully, she turns into “drone layer” (drones develop from non-fertilized eggs). This is because the queen is not capable of laying fertilizable eggs that alone can turn into worker bees. Since there is no replacement available for the queen’s position due to lack of fertilized mature females it brings death for the colony.

Even though it is hard to detect the exact time, generally the virgin queen mates in 6-10 days after emerging, and she starts laying eggs after 2-3 days of her return in the hive.
Thelytoky is a special and infrequent reproduction process of the bees, where the female worker bees lay eggs. This is common among the Cape bees, or Apis mellifera capensis, and very few other colonies.

With the decrease of pheromone outputs, with aging or disease, the worker bees, commonly sometimes replace the queen bee in a procedure called “supersedure”.
At times, the beekeeper might encourage supersedure by excerpting the middle or back legs of the queen, so that she is unable to keep the eggs at the bottom of the hatch cells. As soon as the workers notice the problem, they will immediately start searching for replacements, and as soon as a virgin queen is ready, they will sting the old queen to death. Balling turns out is a great problem for the beekeepers.

In case of sudden death of the queen bee, the workers tend to cover numerous cells with the royal jelly where a larva has just come out. While the larva drifts on the royal jelly, the workers start constructing the cell for the emerging queen. The emergency queens being smaller and less productive in nature are usually not very popular with the keepers.

Even though the name suggests, it is a fact that the sole function of the queen bee is to act as an egg producing machine rather than directly influencing the colony. A mature well-fed queen is capable of laying about 2000 eggs a day, in springtime. The size of the eggs is more than her weight. The workers continuously attend to her to give her requirements and remove the wastes. The attendants must accumulate and re-distribute a unique pheromone, queen mandibular pheromone, whose main function is to restrict the workers from initiating the queen cells.

The queen can manipulate the sex of her eggs. Depending on the brood cell, the queen bee decides whether to lay a fertilized (female) or unfertilized (male) egg as the drones occupy comparatively larger cells. While the eggs pass through oviduct, they undergo fertilization by sperms released from spermatheca.

How to Identify the Queen?

The mature mated bee is the queen of the colony. She is the mother of the majority of population in the hive. Normal life cycle of an adult queen honeybee is about 3-5 years. In order to maintain the population of the colony, you must find a healthy well-fed queen. With aging or diseases, the queen needs instant replacement either by the bees, or artificially. Thus, it is very vital to know how to detect the reigning bee. Here are the best suggestions to search, while looking for the queen:

Even though the queen bee has a greater elongated abdomen than the workers do, with about.

With sixty to eighty thousand honeybees residing together, it might be a problem in identifying the queen. Thus, often, beekeepers stroke the queens of the non-feral colonies with a slight mark of paint on the thorax, which will cause her no harm.

The professional breeders of the queens tend to use unique colors that help to detect the hatching year of the queen and their age in order to maintain a powerful hive and the keep track when to replace the reigning queen.

There are numerous procedures to breed more queens and allow them to mate. The most common examples are the walk-away split, Jenter kit, grafting, mating yard, Cloake board or artificial insemination.