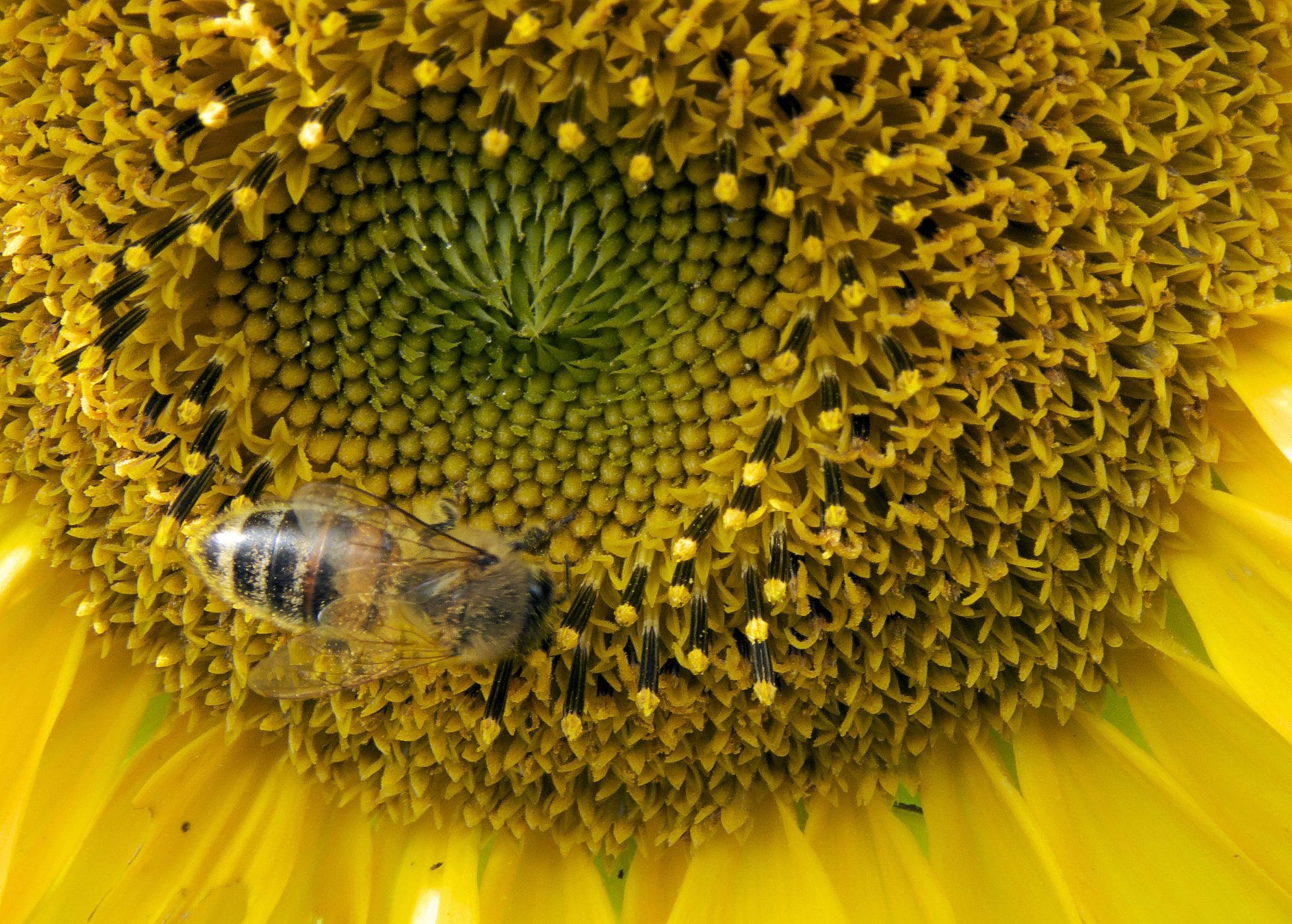 The drones are the males whose only work in the hive is to mate with the queen bee. The queen bee’s sole job is to lay eggs. The worker bees take care of the offsprings, collect honey and pollen grains to feed every bee in the colony; they also keep the hive clean. Bees live on pollen grains and nectar. Pollen grains are the main source of nutrients and proteins, while nectar mainly provides them with energy. Most of the pollen feeds the larvae. In the process of collecting pollen grains, they gather virus which is in the pollen. For the preparation of ‘bee bread’ as food for the larvae, the bees mix saliva and nectar along with the pollen, spreading the virus. Researchers report that the mites also account for spreading the virus, as they are parasites of the bees. Biologists claim that there are about 25,000 bee species belonging into above 4000 genera (bee types) in the world. All these belong to 9 families under the super family Apoidea. Other than the coldest Polar Regions, we find ants, bees and wasps all over the world in every habitation.

We find these insects in the terrestrial Polar Regions, the temperate and the tropics, the rain forests, terrestrial biomes, forest, mountain wetlands, marsh, tundra taiga desert or dune chaparral forest, swamp and bog and the scrub. There is a sac fixed to the stinger in which they store their venom. Only female bees sting; the reason is that the stinger, known as ovipositor, is a reproductive organ of the female bee. The worker bees also known as sterile females, use their ovipositors just to sting, they do not lay eggs, whereas the queen bee makes use of her ovipositor to lay eggs as well as to sting.

All colors are visible to the bee, except red. Their sense of smell directs them to the flowers that possess the pollen grains that they need. Pollen is a food for the bees, in addition to this, in the course of their flight, few pollen grains drop, causing cross-pollination. Symbiosis is the relationship between insects and plants. Some varieties of bees usually die once they sting, this happens because the stingers fixed to their abdomen contain tiny barbs or hooks that tear the abdomen apart as soon as they try to fly after stinging anything, Bee breeding is an established phenomenon in forestry, where they breed advance types of bees from the older variety. Most collectors harvest the shining bees that we see around our planet from bee hives with the help of Quarry or otherwise wand of excavation, Vajra Power Tool, mining laser and scoop. Every bee has a default “species” that its region determines. The “chromosomes” of the bee carries their trait, which determines its species and other qualities. In order to achieve a bee of a desired quality, you have to combine these traits. For example, if you crossbreed a slow industrious breed with a faster cultivated breed you get a new breed with both these qualities.

The process of breeding begins by placing a drone and a princess into an Apiary, and then, another queen of the same kind replaces the princess. The queen will produce offsprings and finally die. The traits of these new offspring will depend on the kind of drone you paired with the princess to start with. Combining bees of particular traits, results in specific breeds. You can find a summary of some of the possible combinations here below: In a hive there are three kinds of bees, the Drones, Workers and Queen.

Only the queen lays eggs in the hive; she lays almost 1,500 eggs a day. She has her own typical scent named pheromones by which she communicates in her hive. As field bees, the worker bees execute the following tasks: collecting water and a sticky material by the name Propolis, collecting pollen and nectar from flowers.

Bees have 2 stomachs-one stomach is particularly meant for stocking water or the nectar gathered from the flowers to take them back to the hive. The other stomach serves eating purposes. All the male bees in the hive are the drones. They do not have stingers. Their job is finding a queen bee in the hive to mate with. Male bees fly out of their hive and meet together at a specified drone congregation place expecting a queen.

Suppose a worker bee stings anything she dies.

Bees have six legs; they are in the class of insects.

There are four stages of development for the bees : eggs, larvae, pupae and adult bee.

The cells in the honeycomb serve to bring up their young ones, stock water, nectar, pollen and honey.

Honey is actually a sweet, watery liquid collected by the bees from the flowers . After a series of processes in their stomach, they cast it out again into the cells of the honeycomb. After this, to remove the excess of moisture they use their wings to fan. The final product is honey.

Bees are the sole insects world over that account for food for humans in the forms of vegetables and fruits that evolve out of pollination. The natural preservative that honey has, prevents the growth of bacteria. Honey’s first discovery was in an Egyptian tomb. Bees existed on earth 30 million years ago.

The tongues of the bees, called Proboscis, are like straw, and helps them to suck liquids. They have mandibles for chewing.

Bees have a basket called a pollen basket on their hind legs to carry pollen. Pollen supplies proteins to the hive and it is essential for feeding the young ones to enable them to grow.

In summer the population in a beehive is as much as 50,000 to 80,000 bees. Bees must gather nectar from nearly 2 million flowers In order to make one pound honey and to collect this, bees traverse more than once round the world. It takes the combined effort of more than 556 worker bees to gather this honey.

In her lifetime an average worker bee makes 1/12 th of a tsp of honey.

The bees have 2 pairs of wings and they have minute teeth that lock the wings while the bee flies.

These insects exhibit exceptional modes of communication. Bees communicate through dances with the help of pheromones (chemical scents).

Most food production in the world is a result of the bees pollinating the crops. In order that the flowering plants produce seeds and fruits they depend on bees for pollination. These plants would produce lesser fruits or vegetables for us to eat if the bees did not pollinate them.

One beehive is capable of producing more than 100 pounds (45 kg) of excess honey. The beekeepers harvest only this surplus honey.

The average lifespan of a honey bee is around 3 – 6 weeks during the working season. We obtain five products from the bee hive: Royal jelly, honey, beeswax, Propolis, and pollen.
An exclusive gland on the head of the worker bee produces the Royal jelly. Throughout her life by the worker bees feed the Queen bee with royal jelly.

Honey comes in various flavors and colors. The color and flavor of the honey depend on the flower from which you collect the nectar.

Even though bears are fond of honey, they have a preference for bee larvae since they contain protein.

Bees make bees wax. The secretion produced by the special glands in the stomach of the bee is wax. These glands secrete the wax into tiny pockets onto their stomach. The bees take this wax and chew with their mandibles and shape it to construct their honeycomb.
Propolis is a gluey material gathered by the bees from the buds of trees. Propolis serves to weatherproof the hive in spots where rain seeps in, and against drafts. The discovery of anti-bacterial properties of the Propolis has brought its use into the medical field.