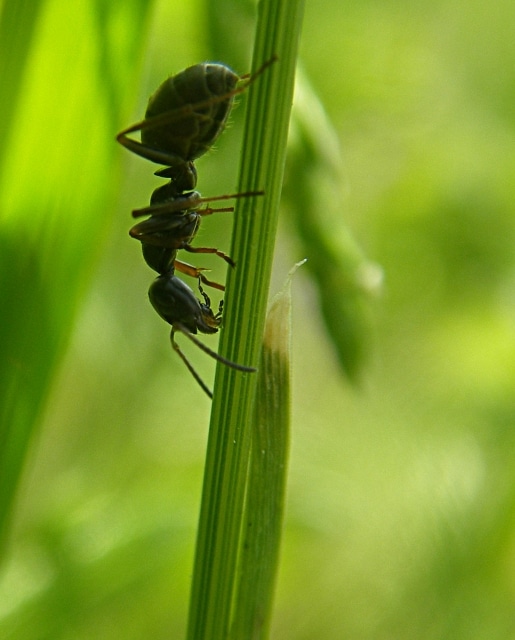 Western Harvester Ants: Detailed Article on Ant Biology and Use in Farms

Western Harvester Ants or Pogonomyrmex occidentalis inhabit the arid grasslands and deserts of the Western parts of America and live below an altitude of 6,300 feet (1,900 meters).  These harvester ants take their name from their habit of collecting food items including edible seeds.  On the same note, the word “Occidentalis” which means “Western” in Latin, refers to its characteristic habitation in the Western United States.  These ants create large mounds of soil mixed with gravel and you will notice that most surrounding areas will have no plant life.  We have heard several reports of grazing lands destroyed by large populations of these ants. They pack a venomous and painful sting and defend their colonies aggressively. The Western Harvester Ants are about 5-6 mm long, and their color can vary from reddish to brown. Between the thorax and abdomen lies the two-segmented stalk or pedicel. You can find an intricate arrangement of hairs beneath the head. Adults can manifest as winged males and females or as wingless females (workers).The winged ants have a larger pair of anterior wings and a smaller pair of smaller ones.

In their natural habitat, a colony of Western Harvester Ants can have a substantial population of 1 queen and about 20,000 workers.  A colony can endure for 20 years and a queen can have a lifespan of up to 40 years.  The nest that a colony inhabits could run as deep as 16 feet (5 meters) deep, with the queen living at the bottom and the other ants distributing themselves at various levels in the colony that offer them safe heat levels.  You can see distinctive mound nests in conical mounds of diameter 35 inches (89 cm) representing the sand dug out by the ants in the process of making their nests. You have two varieties of queens among the Western Harvester Ants.  Some queens claustrally (meaning: without moving out from the colony-the workers feed the queen) found their colonies while other varieties of queens found their colonies semi-claustrally (meaning: they forage outside for food). They lay unembryonated eggs (eggs without embryo) in the initial batch, and most of them die.  In the process of founding the colony, the larvae eat many of the eggs and the first workers or “nanitics” that survive, show a stunted growth and measure only 2 mm, a size smaller than the typical worker ant shows.  Most founding queens have a short life of only about 8 months from July – March. Most workers have a red body, average around 6 mm and live their varied roles in the colony for about 6 months before they die. They do most of the work in a mature colony, including collecting pollen and seeds from the plants directly and gathering seeds from the ground.  They also gather recently dead insects and store all the food in specially appointed places inside the colony in clear anticipation of harsh winters when food becomes scarce. In the summer, they forage between 3 to 9 p.m., while in the cooler days they are active from 5-11 am.  An interesting feature here is that these Western Harvester ants seem to believe in food diversity, and collect different types of grains every day.

Within the colony, you can find ants consuming different foods.  You find the larvae consuming solids while the adults consume liquids that include larval excretions.

The reproductive winged males (also called alates) that many colonies release at the same time, mate in swarms on the hilltops that the queen with a flying capacity of 800 meters height can reach.  They mate with multiple males. Ant farms vary with the substrate; the traditional ones are sand based.  However, if you are using a sand kit, you must make sure not to disturb the farm after the ants start tunneling, for fear of the tunnels collapsing and smothering the ants. The modern ant farms for the Western Harvester Ants, however, use a kind of space–age gel that NASA developed to test ant survival at zero gravity. These gel-based habitats contain water and other nutrients to support the normal lifespan of the ants.

How to Set Up an Ant Farm

In the traditional variety of an ant farm, you start by pouring a bag of sand into the habitat to set the process rolling.  However, the new gel-based ant farms are a revelation.  Most gel kits have pre-filled space-age gel that you find ready to use the moment you remove the farm from the box.   The interesting part is that the ants can eat the gel material as they tunnel into it.  Most suppliers of gel farms include a tool that you can use to start tunneling, and in several instances, the ants may either follow your lead or start tunneling on their own.
Many experts opine that, for starters, a farm with about 25 ants would suffice for a beginner. Some sellers of ant farms may supply the ants themselves or attach a coupon enabling you to order the live ants from their connected sources.  You can also sometimes order the kit along with the ants for ant farms.

Without any argument, ant farms are a source of joy to the enthusiasts, but shipment can take place only in ideal weather conditions between 40 and 85 degrees.
If, however, you plan to catch your own ants, make sure that you collect only ants of one species (mixing species causes problems) and further ensure that the ants are big enough not to escape through the ventilation holes.  In such a case, if you are lucky, you may even acquire a queen.  Remember a queen can reproduce so quickly they may outgrow your farm within weeks.

The Legality of Buying Queen Ants

The USDA rules prohibit shipping queen ants because they do not want them to establish colonies where they do not belong. Ecologists consider these hardy and industrious ants as a threat to the environment and fear the damaging effect that non-native species can have on the local wildlife.  Accordingly, the Government does not allow shipping queen ants across state boundaries.  This is why most ant suppliers will respond to your order online with non-reproductive worker ants that have a life span of only up to 6 months.
Also, ant farms are not designed to contain a large queen and the thousands of young she produces. Your ants will work without the queen.

Why Harvester Ants Are Best for Ant Farms

The Western Harvester ants are popular with both ant suppliers as well as farm owners because they are relatively large and you can have them in all types of ant farms. Their diet is known and they will tunnel without a queen. These make them better than finding your own ants outside as you can not be sure what they eat or if they will tunnel without a queen present.

Give your Ants a few drops of water every three days. Don’t make their sand so wet that water pools up on top because they can drown in it. You can use a wet piece of facial tissue or paper towel to squeeze drops of water into the Habitat. Note: gel ant habitats do not need water – the ants get water from the gel.

They usually live 3 to 6 months in the wild. The can live as long as 8 months inside an ant farm.

The Western Harvester Ants demonstrate a perfect community-oriented life pattern that never ceases to surprise adults as well as children.  Their organizational behavior is a source of inspiration not only for the enthusiasts, but also to the eminent behavioral scientists across the world.