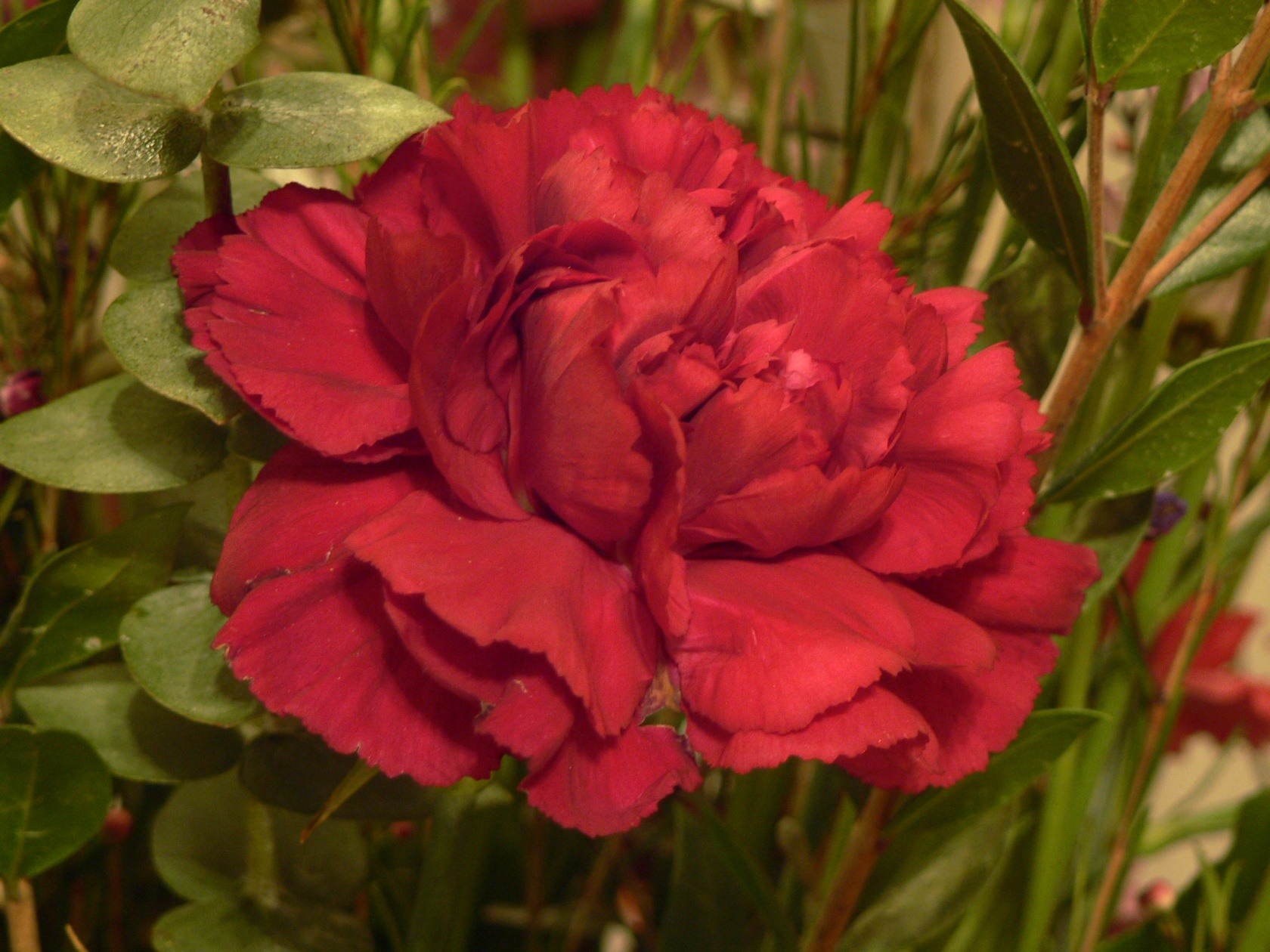 Dianthus caryophyllus, clove pink or the Carnation Flower  belongs to the variety of Dianthus. For 2000 years, people have relentlessly cultivated it widely. for which reason it is not possible to give a precise location, although it is most likely a native of the Mediterranean region. Ancient Rome called them the “Jove’s Flower”as a tribute to their Gods, Spain adopted it as their National Flower, and the Koreans use this flower to honor their parents and teachers.

This soft-stemmed lasting plant grows to a height of 80 cms. Its leaves are lean and grow to a  length of about 15 cms. They are gray-green fading to blue-green in shades. The carnation flower grow one by one or in a cluster of five (arranged in the form of a group of flowers or a bunch). They are 3 or 5 cm in diameter, and exude a  sweet fragrance. The original flower’s normal color is brilliant pinkish-purple, but professionals have grown cultivars of several other colors like red, yellow, white and green.

Note: A cultivar is a collection of plants chosen for particular features which is preserved by propagation.
Primary Significance: Fascination, Distinction, and Love.

Bearing the scientific name Dianthus, more or less interpreting it as “flower of the gods”, or “flower of love”, based on the place from where it is obtained, for centuries, people venerated this flower, especially the Romans and the Greeks. Christians believe that the first carnation bloomed on earth when Mary wept for Jesus as he carried his cross. Among the world’s most ancient cultivated flowers, people cherish it for  its fragrant pink color, ruffled appearance, the clove like scent and the fact that it seems to bloom forever. Growing the Carnation flowers domestically becomes easy and spreads its popularity among gardeners. Carnations prefer a fertile soil with no accumulated water and four to five hours of bright sun daily. They prefer a mildly alkaline soil. If necessary add peat to the soil as a supplement.

In case your frost-free date arrives late towards spring, using the seeds for planting carnation flowers 6 to 8 weeks earlier indoors, is a good idea. Use bearing seeds in pots with good manure. Keep the plants moist by misting, and do not wet them. They germinate in about two to three weeks. Indoor plants bloom the same time every year.

In summer, you can sow the seeds directly in the garden in sunny areas. If planted outside, place the seed at a depth of 1/8inch and a distance of 12 inches apart in well-drained fertile soil. Remove the dirt from the seeds and water regularly. Until the seeds set well, keep them moist, never wet. It the seeds are directly sown, they will not bloom for a year.

Carnation plants are likely to stretch wide and become quite big, thus plant them 12 to 18 inches apart. Plant the saplings at the same depth as the earlier ones. While setting the plants indoors, only just cover the peat pot. Keep the top of the roots covered and in level with the ground. After planting,  regularly water them, but do not wet them; just keep them moist.

Excessive watering will turn the Carnation flowers  yellow. Water them once a week, unless in extreme heat or in dry weather. Even in a hot climate, do not let the plants remain in water. If you need to collect the seeds for the coming year, or naturalize  a perpetual carnation, do not remove the plants as soon as they bloom. Bear in mind not to mulch carnations. The Carnation flower prefers openness around the stem; mulching will hinder the blooming.  Maintain a moisture free area around them and  provide your carnations with 10-10-10 liquid fertilizer every six to eight weeks. One cannot but admire Carnations as cut flowers, and they are also frequently used in bouquets and boutonnieres. They remain fresh for two to three weeks, as cut flowers. Cultivating carnation flowers will make sure that you have lovely flowers indoors as well as outdoors.