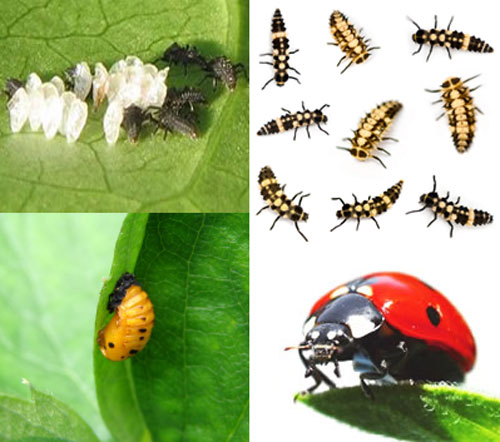 Ladybugs belong to the family Coccinellidaeof the order Coleoptera, which is a group among beetles. Their common feature includes the oval-shaped structure of the body and a wide range of colors, in which they are found. Though they are commonly referred to as “bugs”, they are actually beetles, which have a characterized hardened shell known as “elytra”, and also it undergoes four stages of metamorphosis process like other beetles.

The life of a ladybug is very much similar to butterflies, as both undergo metamorphosis process to emerge as an adult. Their four stages of life are egg stage, larval stage, pupal stage and finally an adult beetle stage. The eggs of Ladybug are deposited on a leaf”s underside. It is mainly done to secure them from predator”s attack. Such a protected place also protects the eggs from harsh weather. A female ladybird often lays between ten and fifteen eggs in one location, which has enough supply of food, so that when the babies hatch out of the eggs, they can have plenty of food to consume. These eggs look similar to the yellow colored jelly beans, but those hatched earlier are tiny compared to the latter ones. They are so sensitive, that touching the eggs can kill the babies. The ladybug eggs hatch and the small insect emerges in the form of a larva. As soon as it comes out of the hatched egg, it starts searching for something to consume. Mainly, they will feed on tiny aphids or mites. Usually, they will find an abundance of food in their premise, as the ladybug will select only such locations to lay eggs, where the babies can find enough food. The main reason to consume more food in this period is to make the color brighter. Studies reveal that the ladybugs that had plenty of food to consume in the initial stage tend to develop brighter colored bodies, which is a defense to warn the predators. The small larvae appear like a small alligator. After a few days of growth, the larvae start to shed their skin many times. Those molted skins of larvae can be found on the leaves of some trees or plants. After a few weeks from emerging as a larva, it will start to transform into the shape of a shrimp, known as a pupa. At this time, the ladybug will attach itself to the under portion of a leaf, and stays in a dormant stage, which gives the impression of a sleeping pupa. But in reality, it is not sleeping; instead a great process of metamorphosis is taking place, in which the Pupa gets transformed into an adult ladybug. After the completion of the metamorphosis process, the skin of the pupa starts to split open, out of which, an adult ladybug emerges. But still, it won’t appear the same as we commonly find them in the garden or in nature. Initially, this insect will look pale with dull colored body and soft shell. But, within few hours, the shells of these ladybugs harden and their body color starts to grow brighter.

How Long Do They Live?

After the female ladybug lays eggs, it hatches between three and ten days, which depend on many factors like the environment temperature, climate and other ambient conditions. The larvae hatch out of the egg, and may continue in the same stage for about a month, and later transforms into a pupal stage. The pupal stage continues for at least 15 days, after which the adult ladybug emerges. An adult ladybug may live for a year or two.