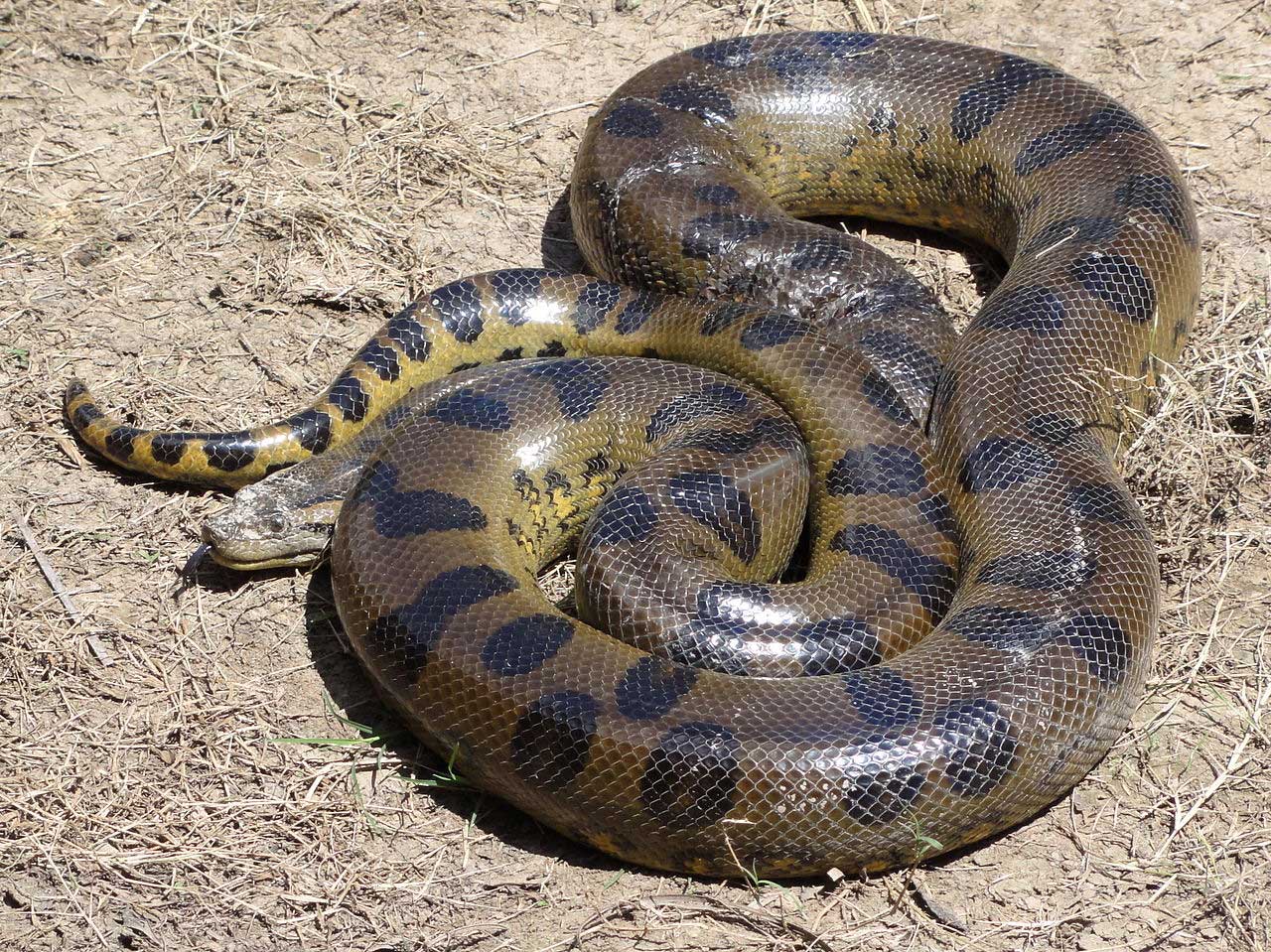 This family includes non-poisonous, but large and strong snakes that compress their prey in its coils; they are capable of swallowing an adult buck and other big animals! These types of snakes depend on their energy in order to gulp their prey, and not like the other poisonous snakes that use their venom as their first tool of attack. In their upper and lower jaws they have sets of teeth in the absence of fangs. Curiosity arises in how these big snakes suffocate their prey. They wind their prey within their grip and tighten it at every breath that they release out.  Moreover, they are aware of the time to stop indulging in thedeath-squeezeof  their prey Scientists state that these snakes are capable of sensing the heartbeat of their prey and release them when the heartbeat stops. A few members in this family are as given below: An anaconda is a huge non-poisonous snake seen in the tropical regions of South America. Even though the name concerns a family of snakes, Anaconda implies, except for a specific variety, the green anaconda, Eunectes Murinus, and the biggest snake on earth.

Anaconda builds its shelter in the jungles of the Amazon or southern regions of America and is a division of the Boa Constrictor group. Anaconda prefers solitude, they dwell adjacent to lakes, rivers and marshy lands. The foremost way of escape when they meet with threat is water. More willing than confronting, they prefer to slip into water unseen, in case they can.

Anaconda feeds on amphibians such as toads and frogs, also caiman, fish, ducks, birds and turtles.

Anacondas bring forth, 24 to 35 young ones  in one delivery. Corallus Caninus, generally known as emerald tree boa, belongs to the boa genus, they are non-poisonous snakes. You can see them  in the rainforests of the continent of South America. A matured emerald tree boa is almost 6 ft long (1.8 m). Their fore teeth are well developed;  when compared with the other non-poisonous snakes, it is extra large. Their color is an emerald green ground color having uneven zig zag broken stripes,  otherwise named ‘lightening bolts’ across the back and belly that are yellow in color. Their main food is tiny mammals, yet they seem to feed on minor varieties of birds, frogs and lizards. C. Canines are ovoviviparous, having females giving birth from 6 to 14 young ones in a single delivery, and at times, still more. A Rosy Boa Eating a Mouse – Photo by: Cole Shatto

The rosy boa (Lichanura trivirgata) belongs to the Biodae family of snakes; of the two members that belong to this family only one of them dwell in the United States. Rubber boa (Charina Botae) is the other member.  The rosy boa inhabits the South western regions of America, Mexico, Sonora and Baja California.  These tiny nice-looking snakes grow up to a length of 39 in (1 m) (although a few samples from the coasts of California attain a length of 4 feet). For the sake of safety from environmental predators and other elements, the rosy boas stay a major part of their lives hiding under and in the cracks of rocks. The usual habitation of the rosy boa is the outcrops of granite on the earth’s crust.  The rosy boa is a good preference as a pet snake on account of its features, like: tiny size, passive behavior, easiness to nurture and the limited space needed for its enclosure (10 to 20 gallons). The Jamaican Boa or yellow snake (Epicrates Subflavus) is a poison less boa variety widespread in Jamaica. The coloration of the Jamaican boa is golden yellow all through the frontal part of the body and all around the head, zigzagging black cross lines that are  darker in color approaching the latter extreme of its body. The body is sufficiently long, as much as 2 meters (6’ 7) totally. They are seen in Jamaica, inclusive of Goat Island.