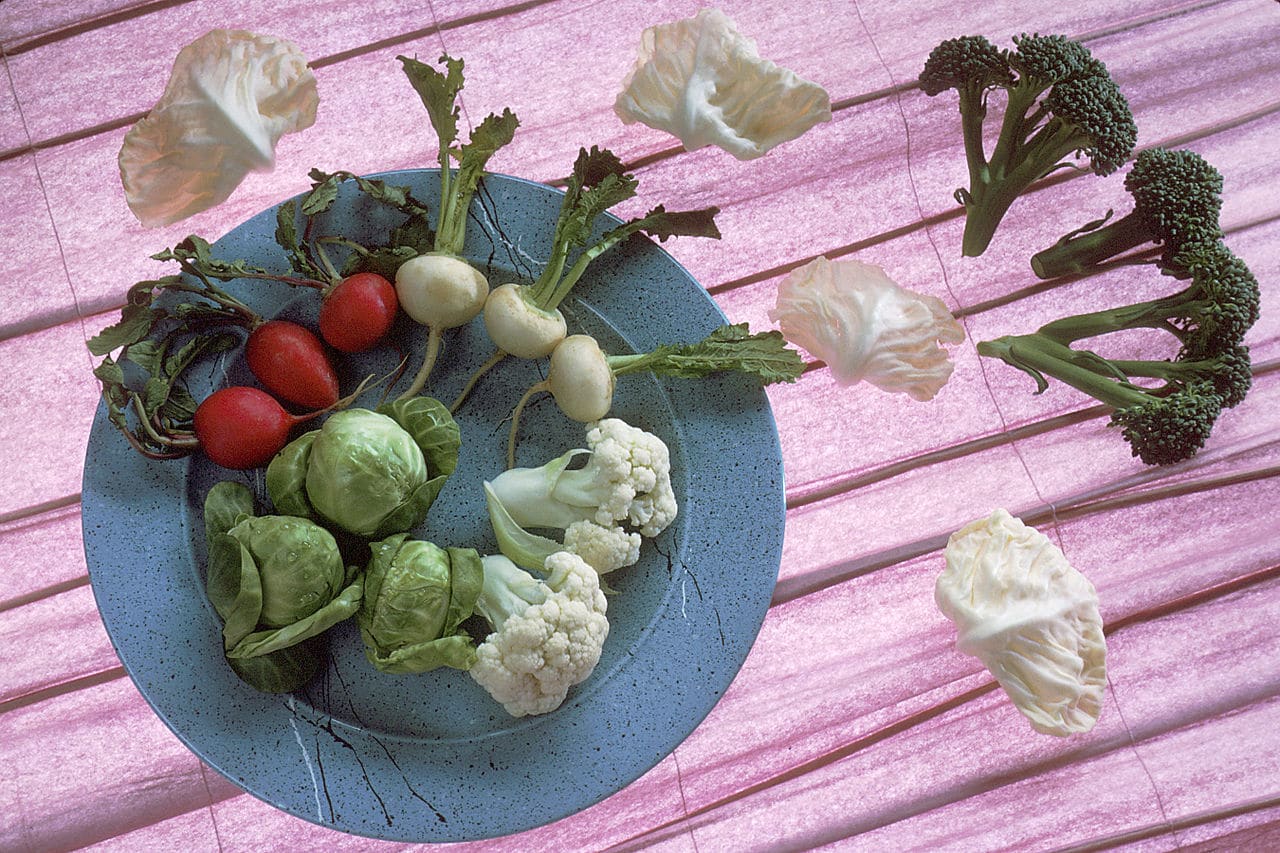 Vegetables from the Brassicaceae family comprise of Cruciferous vegetables. The family’s other name is Cruciferae, derived from New Latin, meaning cross bearing”. They are so called due the nature of their flowers, having four petals, resembling a cross. Many varieties of such vegetables of varying genre are extensively cultivated for consumption as food. These include cabbage, cauliflower, garden cress, broccoli, Bok Choy, Brussels’ sprouts plus related leafy green vegetables.

The ten most popular cruciferous vegetables consumed by the public and informally known as Cole Crops come from the same group (B. Oleracea.) Taxonomically these are undistinguished from each other and are only distinguishable by horticultural grouping of their cultivar groups. A number of varieties from this family are suitable for eating.

Cruciferous vegetables represent the main food crops globally. They have a rich content of vitamin C, soluble fiber and include phytochemicals and multiple nutrients.

Here’s a List of the More Popular Cruciferous Vegetables: Horseradish is a recurrent plant from the Brassicaceae family. The other plants from this family are broccoli, cabbage, mustard and wasabi. Possibly it is native to western Asia and Southeastern Europe, though popular worldwide now.  It can grow as tall as  almost five feet and is mainly cultivated for its white, big, tapered root. Americans use the term collard greens for different cultivars of Brassica Oleracea, from the Acephala group that also includes  broccoli and cabbage. These loose-leafed vegetables are cultivated because of their edible leaves in dark colors. These are also grown  as garden ornamentals, mostly in Brazil, the Southern United States, Portugal, Montenegro, Bosnia, numerous regions of Africa, northern Spain, southern Croatia and India. Kai-LAN (spelled as gay-learn too) is the Cantonese name of a vegetable also famous as Chinese kale or Chinese broccoli. This leafy vegetable has flat, thick, shiny blue-green leaves having thick stems with a few small flower heads resembling broccoli. Kai-Lan plus Broccoli come from the same variety of Brassica Oleracea, but Kai-Lan falls in the alboglabra group.

Its flavor is akin to broccoli, though a bit more bitter. This is distinctly stronger also. A hybrid variety of Kai-LAN and broccoli are broccolini. Brussels sprout is a cultivar from the Gemmifera family of cabbages (Brassica Oleracea). It is cultivated for its buds, fit for human consumption. This leafy green vegetable generally has a diameter of 2.5 to 4 cm and looks like tiny cabbage. It has been popular since long in Brussels, and probably originated and got its name from there. Broccoli, a green edible plant from the cabbage family, has a large flowering head that is consumed as a vegetable. Broccoli is derived from the Italian plural of broccolo, meaning “the flowering crest of a cabbage”. It is the minuscule shape of Brocco, which means sprout of “small nail”. Broccoli is frequently steamed or boiled, but can be consumed raw.

Broccoli is categorized among the Italica cultivar collection of the genus Brassica Oleracea. Broccoli comes with big flower heads, typically having green color, set in a treelike structure, resting on branches emerging from a solid, edible stalk. Cauliflower is among the many vegetables from the Brassica Oleracea variety, coming from the  Brassicaceae family. This annual reproduces through seed. Normally, only the white colored portion is consumed. The head, comprising of a white inflorescence meristem, resembles that of  broccoli, which is different due its flower buds. Both the varieties are special cultivars/subspecies of the turnip, belonging to the same species of Western staples as broccoli, cabbage and cauliflower. The turnip also called white turnip (Brassica Rapa subspecies of Rapa) is a root vegetable frequently grown in mild climates the world over. It is a white, round taproot. Small, soft varieties are edible by humans, though bigger varieties are offered as feed for farm animals.

The most usual variety of turnip generally is white in color except for 1-6 inches on its top that juts out from the earth and is red, purple or greenish, depending on which part gets exposed to the sun. Radish (Raphanus Sativus) is another root vegetable of the Brassicaceae family, that  was cultivated in Europe during pre-Roman times. Radishes are cultivated  and usually eaten  raw all over the world, as a crisp vegetable salad. They come  in  many varieties  of  varying size and color plus  the amount of time needed for their maturing. Sometimes these are also grown as accompanying plants and are affected by only some pests or diseases. They sprout and grow quickly. Its smaller varieties get ready for eating within four weeks while bigger daikon varieties take many months.

Radishes may be grown once or twice a year. These are  inflated tap roots that can be cylindrical, tapering or globular.  The color of their skin varies from red, purple, pink, green and yellow to black, though the flesh is typically white. The shorter varieties have leaves of about one inch diameter, which can go up to three inches in the  longer variety.

Antimicrobial activity: The ISO Thio-Cyanates play an important role in wasabi’s action against pylori Helicobacter. Sulforaphane displays anti-inflammatory properties of the gastric mucosae infecting the Helicobacter pyloris in mice and humans. ISO-Thio-Cyanates have also been known to prevent cancer when tested on mice.

Cruciferous vegetables include glucosinolates, which are transformed to many chemicals which could possess anticancer properties. For instance, 3,3′-Diindolylmethane (DIM) found in Brassica vegetables is an antiandrogen that is antiproliferative to human prostate cancer cells.

Consumption of these vegetables is connected to low rates of cancer. Moreover, 3,3′-Diindolylmethane (DIM) and indole-3-carbinol (I3C) also influence estrogen metabolism and lead to positive shifts in hormone markers which may decrease the occurrence of many kinds of cancer.

Goiter
Cruciferous vegetables could possibly be goitrogenic (encouraging goiter formation). They have enzymes which hinder the formation of thyroid hormone in people having iodine deficiency. Cooking for thirty minutes considerably decreases the quantity of nitriles and goitrogens. With large consumption of crucifers, the goitrogens slows down the assimilation of iodine into thyroid hormone as well the relocation of iodine to milk by the mammary glands.