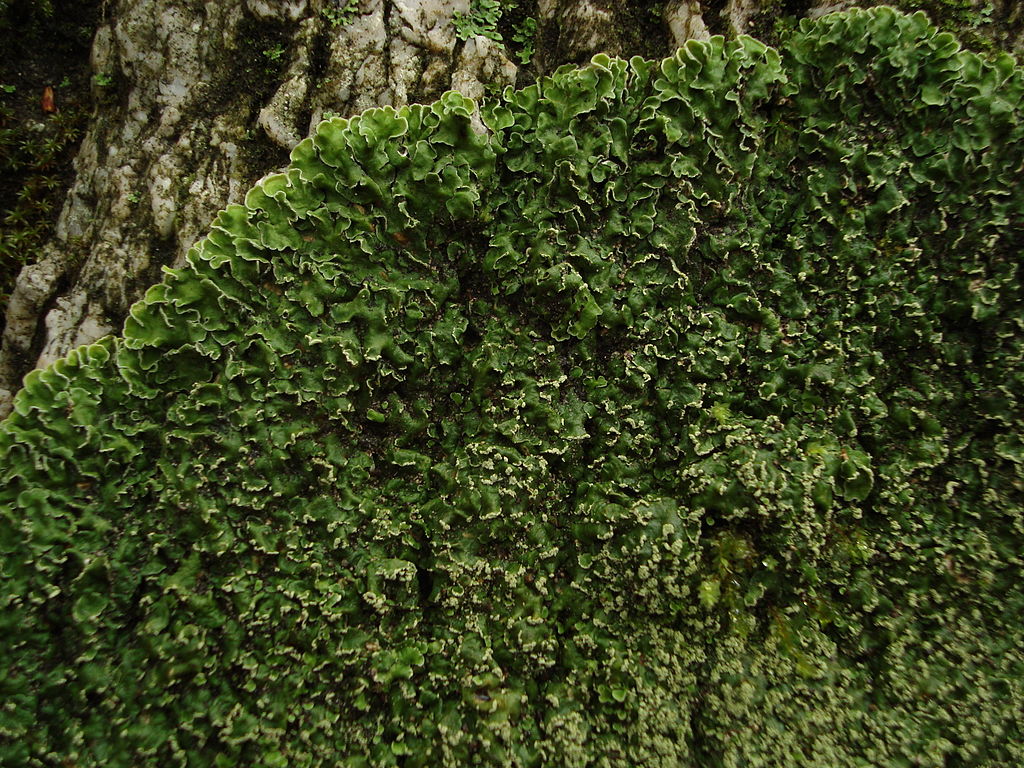 The foliose lichen is a symbiosis of two or more organisms, namely the fungus and the alga or cyanobacteria. The characteristics of the fungus and the alga found in this species are very different from the regular ones found in the nature. Both the organisms cannot survive alone and need support from each other. Thus the fungus encircles the algae cells and covers it with fungus tissues of a composite nature, thereby creating the body of Foliose lichen known as the Thallus. Nonphotosynthetic bacteria are also found in the lichen’s Thalia. This results in too many marginal structures of foliose lichens. It is usually found with a leafy thallus that spreads horizontally on the surfaces.  The lichen’s body has margins, which are like  leaf like structures that have radical growth with periodical branches and division. The other types of lichens are the fruticose lichen and the Crustose lichen.

Usually the leafy lobes are found in different size and shapes. It is not always with the radical leafy lobes type, it can also be found with a Crenate (scalloped or notched margin) or rounded teethed margin. There is a great diversity found in the forms and shapes of foliose lichen compared to Fruticose and Crustose. It can be seen in a wide variety of morphologies like shrubby, ruffled, rock-like and with delicate lobes.

Very recently, it was proved that lichen is an organism consisting of a fungus and an alga. In 1867, Simon Schwendener, the Swiss botanist revealed a dual theory on lichens, in which it was stated that the organism consist of alga or cyanobacteria and fungus and from there the true nature of lichen came into existence.  Schwendener’s hypothesis tried to prove that lichen is not a single organism, but a combination of two organisms which support each other for their existence and live closely together. He studied this fact with the use of a light microscope. But the other researchers like Nylander and James Crombie did not accept the Schwendener’s hypothesis because till that time it was believed that all living organisms live independently and Schwender couldn’t provide any evidences to prove it. The other researchers like Albert Bernhard Frank, Hermann Hellriegel, Melchior Treub and Heinrich Anton de Bary felt that there was some point in Schwendener’s hypothesis. Later, after the developments in research processes, Schwendener’s hypothesis started to get acceptance and popularity. In 1939, the re-synthesis experiment done by Eugen Thomas was successful and the results were published all over the world.

Researches claimed about getting fossils of lichen dating back to 400 million years ago. From this we can assume that the earlier forms of lichen had existed for around 600 million years.. If the lichen forms on a proper and undisturbed surface and is left unattended, then this species can survive for many centuries.  A sample of certain lichen like Geographicum, Artic Crustose Lichen and Rhisocarpon was about 9000 years old!

Foliose lichens are a horizontally growing leafy type of lichens that are always attached to the surface where it is growing.  They are grown in a differentiated layer of tissue and the lobes are not attached to the substrates. Even the multiple branches of the “thallus” are not really attached to the surface and can be separated with the help of a knife. It has cortex on both upside and downside. The photobiontic layer (Living only in light) is present in the upper part of the medulla which helps to provide enough light to the alga in the photosynthesis process.

There are many types of Foliose lichens, like Flavoparmelia Caperata which usually grow on the limbs of coastal shrubs, Lobaria Pulmonaria commonly known as Lungwort, which can be seen in the coastal ranges of California, Xanthoria Polycarpa, usually seen in the bark of a tree,  Peltigera Leucophlebia, usually found in moist and shady places, Candelaria Concolor, Physcia Albinia, Melanelia glabra, Parmotrema stuppeum, etc.

Foliose lichens can be found in almost all parts of the world, irrespective of the climatic condition. It can survive in the most extreme and hostile places in the world. It can be seen on high mountains as well as in the arctic regions. They can survive frost and may be the only vegetation found in such cold regions. They can also be seen in less extreme climatic conditions. It is usually seen over the rocks and trees..

It is believed that this species is extensively widespread due to the combination of the organisms. This partnership helps them to thrive in the worst climatic conditions. By the process of photosynthesis, alga provides some organic nutrients to the fungus and in return fungus provides water, nutrients and gases that it absorbs from the environment. This relationship of mutual giving and taking and mutual benefitting is called “symbiosis”. Many researchers reached to a conclusion that the fungus is a weak parasite which doesn’t prey on the algae cells and some others think that alga is kept captive by fungus. But this relationship helps them to thrive in any kind of habitat.

Foliose lichen is believed to have a wide range of uses since long time. Before the discovery of dyes, the lichen was used in making dyes for clothing. As different species of lichens have different colors, a wide variety of colored clothing was produced with the help of the lichens.

Lichen also has importance in the chemistry field. Many acids can be formed with the lichen. The litmus dye which is commonly used as an alkaline indicator or acid in chemistry labs is derived from lichen. It is also effective in certain drugs and believed to have properties to substitute penicillin in medicines. Lichen often reproduces by breaking off tiny parts of its body that spreads over other surfaces and new lichens emerge from that. The fungal component of lichens is expert in producing spores on the surface, thereby emerging into new lichen. The powdery mass found on the surface is the smaller body parts of lichen that they shed on other surfaces from which new lichen is produced. Those small bits are individually called “Soredia.” It consists of both the fungus and alga component.

Mostly, fungal spores growing in Apothecia and Perithecia can be found on the surface of the lichen. The spores are created by the fungal partner and alga cells do not appear in those spores. After it is shed from the body, it is crucial to make contact with an alga partner to survive or else the germinating spore will become lifeless as it cannot thrive on its own.

The Foliose lichen’s growth is relatively slow. The environmental condition and the nature of the species play an important part of its growth rate. Researchers are investigating the growth rate in lengthwise, breadthwise and area-wise spaces but yet a fruitful result has not received. Some claim that foliose lichen grows at a faster rate than fruticose and other lichens. It grows about 2cm per year.

This information was collected by researchers with the help of photographs. They took photographs in all the possible ways and studied the plant’s growth and changes to reach this conclusion.