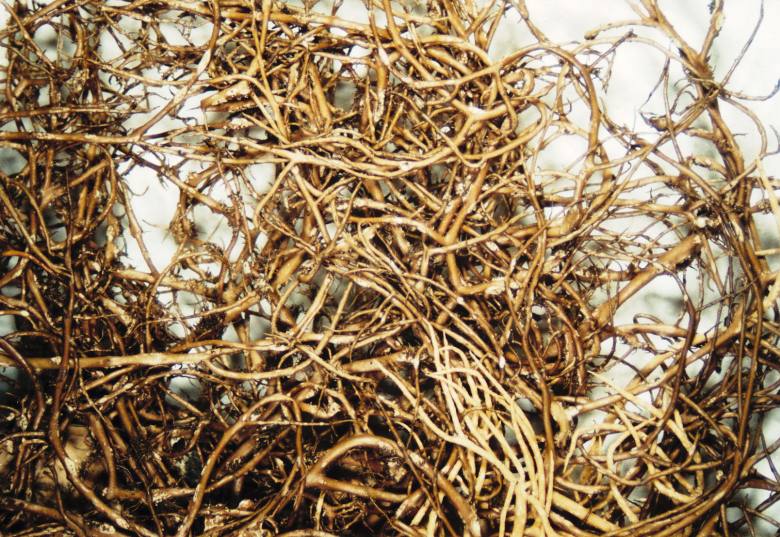 The fruticose lichen is a combination of two or more organisms that cannot survive independently. It requires each other’s help to thrive. It consists of namely the fungus and algae or cyanobacteria. The characteristics of the fungus and the alga found in this species are very different from the regular one found in the nature. Their body part, called as thallus, is created by the combination of both the organisms, one which is able to undergo photosynthesis that is the algae and the other one which does not, is the fungus. The fungus encircles the algae cells and covers it with fungus tissues of a composite nature. It also consists of a non-photosynthetic bacteria and its role in this formation is still unknown. This leads to many marginal structures of fruticose lichens. Among various types of lichen, fruticose is the shrub type molds that grow upright from the ground vertically or beard-like with small tangles. It is usually attached to the substrate only at the base with a circular cross section. When it hangs down from the substrate, it looks very similar to Spanish moss.History

It is a recent discovery that lichen is a living organism consisting of two components, namely the fungus and the algae. In early1867, Simon Schwendener, the Swiss botanist tried to explain this fact with the help of his dual theory on lichens, and that the lichens came into existence in this original form, but due to the lack of evidence, nobody believed him. He studied this organism day and night with the help of a light microscope, but couldn’t prove it to others. Researchers like Nylander and. James Crombie could not understand the theory and considered it as rubbish. But there were some herbalists like Hermann Hellriegel, Melchior Treub, Albert Bernhard Frank and Heinrich Anton de Bary who found the theory interesting and ideal. Slowly it started gaining popularity. Thus later in 1939, Eugen Thomas, a successful researcher proved the Schwendener hypothesis as correct and the result of the re-synthesis experiment was published worldwide. Fossils dating back to 400 million years ago were excavated by researchers. This proves that the lichens could have existed in the original form even more years like 600 million years ago. It is claimed that many forms like arctic Crustose Lichen, Geographicum and Rhisocarpon that are around 9000 years old have been found. It can be a fact because, if lichens are allowed to grow on a suitable long lived substrate, then it can live for centuries.

Fruticose is not at all similar to fruits in anyway. The term fruticose is used to refer as shrubby in technical terms. There are other types of lichens like foliose lichen which has a more leaf-like structure and appearance. Crustose lichen is more like a flat crust on a surface or beneath the rock surface or trees. Squamulose lichen has a scaly thallus with small and minute particles of squamules on it. Fruticose is more like a bushy shrub with no rhizines and has an erect or straight posture. It is also seen hanging from the tree. It is three dimensional and usually found in light green to a bright yellow color. There are also many types of thallus due to the combination of organisms. Usually the thallus layers consist of the outer cortex, an alga layer, a medulla and a central chondroid cylinder of strong parallel hyphae. The types of fruticose lichens are club lichens, shrub lichens and hair lichens. Fruticose lichens are the fast growing lichen compared to others.

Fruticose lichens are a hardy organism that can be found in the most inhospitable regions of the world. It thrives in extreme climates whether hot or cold. Around 8% of the land area is believed to have the presence of these organisms. It is found in arctic regions, mountains and hilly areas, forests and cold regions. But it doesn’t mean that it can be seen on ice or strong sand dunes. It is very commonly found in the North America’s boreal forest.

It grows in a dense carpet form, usually 20 to 30 cm deep and sometimes all over the forest area. It is believed that this species is extensively widespread due to the combination of the organisms. Lichens can overcome all the climatic conditions due to its specific multi-organic cells. They support each other by providing the essential things to each other.  The algae cells, with the process of photosynthesis, provide some organic nutrients to the fungus, and the fungus absorbs water, gases and nutrients from the nature and provides it, in return to the algae. This relationship of mutual giving and taking and this unique support system is called “symbiosis”. Lichen is also used since ancient period as an ingredient (Dye) to color cloth. As lichen can be found in a wide variety of colors, its extracts were used as a dye. It was also used as a packing material while embalming mummies in Egypt.

The Lichen is a very useful organism in chemistry as it produces many acids useful there. It also consists of antibiotic properties, and hence, lichen is used in making drugs, and said to be more effective than penicillin.

Fruticose lichens are capable of both sexual and asexual reproduction. Sexual reproduction usually occurs in the fungus area, but has never been recorded in the algae part. In asexual reproduction, fragmentation is the most common method. of propagation. In this process, a portion of parent lichen gets separated and develops into new lichen. The two vegetative structures for reproduction in lichens are Isidium and Soredium. In Isidium, both the photobiont and the mycobiont cells are present under the cortial layer of the thallus. Usually Isidium is found on the outer part of the thallus in a simple, cylindrically branched and scaly form. Soredium is very different from Isidium in appearance. It also consists of photobiont and mycobiont cells, but here, the photobiont is covered by the mycobiont structure. It is a vegetative structure that can grow independently and is usually found in a powdery form.

The growth of lichens is relatively very slow. The growth rate and the morphology depend mainly on the climatic and environmental conditions. The Fruticose lichen has an erect and upright posture hence it grows at a speedy rate when compared with other lichens. This conclusion is made by the researchers with the help of photographs. The researchers took photographs of lichen plants in all the possible angles and repeated this year by year, which helped them to learn that it grows only up to 1 cm in a year and some smaller forms grow just 1 mm a year. This study also helped to discover the oldest lichen colonies dating back to approximately 9000 years ago.