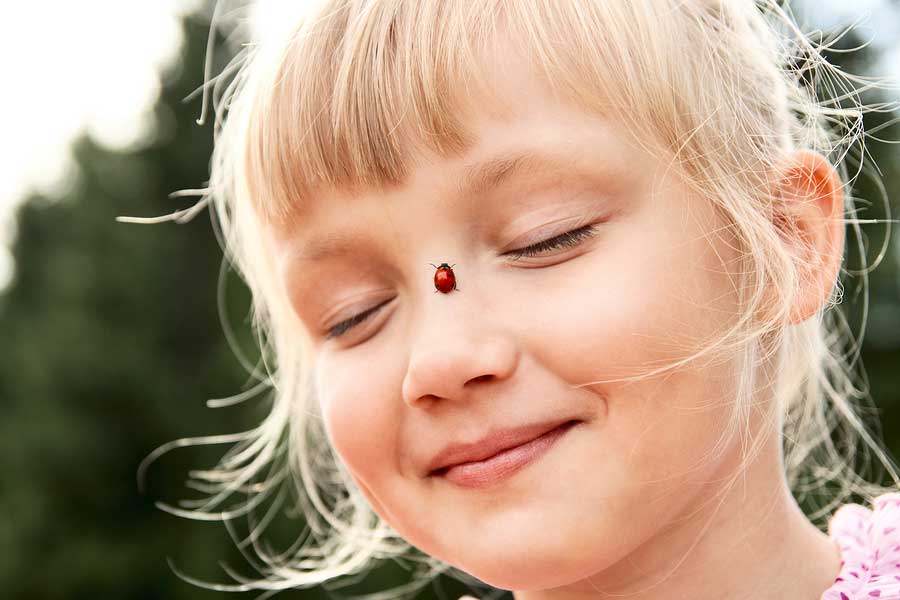 Ladybugs are very unique insects, liked by everyone. They are pretty, colorful, and easy to play with, as well as easy to handle. Adults as well as kids equally get attracted to these non-threatening insects. There are many children’s stories, in which, these insects” don interesting roles. The fact that they are harmless is the main reason for their inclusion in the children”s stories. However, these bugs are insects, hence, each and every aspect of it should be clearly learned to understand their proper nature and behavior.

Ladybugs are the members of Coleoptera order, which is the main group of beetles. They belong to the Coccinellidae family, hence, even if they are called as “bugs”, they are actually the insects referred to as beetles. There are more than 500 ladybug species in US and around 4500 species spread throughout the world.

There is still a confusion regarding their name; whether it is ladybug or ladybeetle. It is believed that this name is related to the Virgin Mary. From the olden days, the pink or red color is often known as women”s colors and these ladybugs were associated with the Virgin Mary. Behind this, there was an old story, which recalls the medieval age around 1690s, when the crops in Europe were completely ruined by insect pests. To overcome this disaster, the farmers of this region prayed to the Virgin Mary, after which their farms were completely filled with red beetles that fed on the insect pests. Hence, the farmers and other people of the region considered this the blessing of Virgin Mary, and thus named it as ladybug.

Most types of lady beetles are brutal predators. A big lady beetle can eat at least 60 aphids a day, whereas a small larva eats around 25 aphids. A ladybeetle may eat around 2,500 aphids in its whole lifetime. Similar to the aphids, they also eat other soft-bodied insects. Some species of this group also feed on the fungal spores, whereas a few species found in the northern parts of America mainly feed on plants. Hence, a particular species out of that group is considered as a serious agricultural pest. When there are fewer aphids, they may also feed on plant pollen.

Life Cycle of a Ladybug

Ladybug completes its lifecycle within one year and some months. It undergoes the metamorphosis process to develop from one Instar to another, which means, they look completely different between their young stage and adult stage. The eggs laid by this beetle are yellowish colored and cone shaped, which they deposit on the leaves or sticks near the source of food. This beetle lays around 10 to 50 eggs. The eggs hatch within 3 to 4 days, and the larva form emerges out of it, which is really a weird looking insect, and nothing similar to the adult beetles; they have an alligator shaped body, covered with thick bristles. They are voracious predators that mainly feed on the garden pests, insect eggs, aphids, corn borers, potato beetles, mealy bugs and similar soft-bodied creatures. As this larva matures, it starts to shed its outer cuticle or exoskeletons up to four times before reaching the pupa form. In the pupa stage, this insect glues the tip of its abdomen to the underside of a leaf with a silken thread. Within a few days, the skin splits and the adult beetle emerges, which is still soft-bodied. Until its shell hardens, it is more vulnerable to be caught by the predators. Initially, the shell of this insect appears to be plain yellow in color, but as days pass, it automatically transforms into red color and retains spots. This color is the signal to the predators regarding their nasty taste, which can be realized when this beetle gets crushed or sucked into the vacuum cleaner. The other unique feature is that this beetle bleeds from its knees, when they feel threatened. This secretion of blood is actually this beetle”s hemolymph, which is highly toxic and foul smelling. The adult beetle is not at all picky in the case of eating; they will feed on any type of insect. They mainly feed on soft-bodied insects to help the farmers or gardeners, but may also feed on its own sisters or brothers, if the food is less.

But Do They Bite?

The perfect question to ask regarding the ladybird’s biting habit is, “Can the ladybird bite?” instead of “Do the ladybird bite”? This insect lacks teeth due to which, they cannot bite; hence they mainly feed on soft-bodied insects. But, like the other species of beetles, they have chewing mouthparts or mandibles to chew or bite. They possess maxillary palps inside their mouth to taste or feel the food. This palps looks like an antennae, but are comparatively smaller. They also have a lower labium, upper labium, grasping maxillae and chewing mandibles. Hence, it can be said that, yes, the ladybugs can bite. But, the mandibles are so small and fragile, if compared to the human parts that it delivers only a very small bite or pinch. This feeling is almost negligible; hence there is no need to get scared of them. They do not sting, as they do not possess any poisonous saliva or gland. They do not bite unless anyone ventures to harm or provoke them. Mainly, they invade the houses or buildings during the harsh seasons, or probably by accident. They may bite only when you harm them. They will react only to protect themselves, when they feel threatened, which does not hurt much.

In the areas of the United States, the ladybugs from the Coccinellidae family invade the houses, especially during autumn, when they leave the feeding sites in search of a perfect habitat to overwinter. Usually when the temperature reaches around 18 degree Celsius, after the late afternoon, they will possibly crawl onto the buildings covered with bright sunlight. Depending on the condition of the weather and location, this insect invades the buildings and houses between September and November. Other areas like building and homes located near the wood or fields are also prone to infestation. In 1976, after a long summer period in the UK, there was a sudden increase in the population of aphids, after which it was followed by the ladybirds plague. In that period, many cases were reported in which, the ladybirds bit the people after the decrease in the aphid population.

As a Common Insect

Till date, no species of lady beetle are endangered; neither is any species legally protected. Most of them are found in abundance that they do not require any special conservation. Some studies though, reveal that a few native species are disappearing in a particular location; researchers have also found them arriving in some new areas.