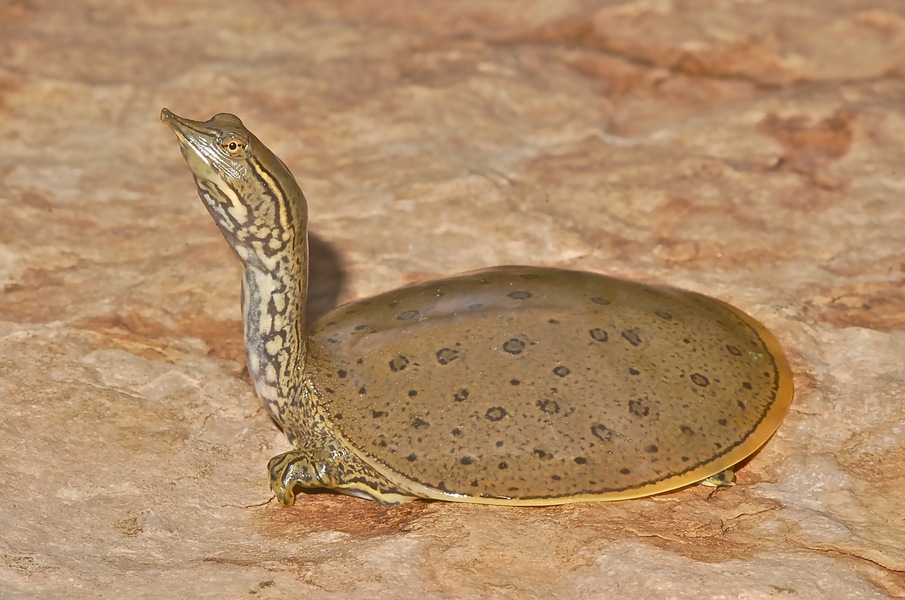 The Florida Softshell turtle (Apalone ferox) is a type of a soft shell turtle that inhabits the Southeastern United Sates. The typical characteristic of the Florida Softshell turtle is that its carapace color is deep brown fading to olive-green. The color of its belly is cream or white. This carapace shields the juvenile turtles from their predators. These large or medium-sized smooth, soft-shelled turtles live in fresh water. Its name is Softshell turtles because, in place of a hard plate its carapace is a soft. The shell is oval without spines on the fore edge. The shell of the female is 16.5 to 35.6 cm in length and colored brown or tanned, whereas that of the male is 11.5 to 26.6 cm in length and colored gray black or brown. They have stout tails. Their tails, legs and head are more or less of the same color. Right from the rear of the eye all along their neck is an orange or cream line with a black border running though. Both the male and female have blotches, streaks or dark spots on their shell. Softshell turtle shells are olive, black or brown color with many stains. In appearance, they are like spiny Softshell turtles.

The growth of smooth Softshell turtles initiates within an egg. First the shells divide, then the tissues, developing further organs. Unlike other turtles, the gender of the Softshell turtles does not depend on temperature. The number of males and females at birth are same. When they are born the back shell is round, and gradually grows into oval shapes. The growth period is from May to September and June and August in particular. The general trend is that the turtles keep on growing all through their life, scientists are in doubt if it is the same with the soft shell turtles.

The breeding time of smooth Softshell turtles is from April to June, perhaps in September too. Males go in search of females and try for chances to mate with other turtles.

Smooth or spiny Softshell turtles just as the Florida Softshell, are more submissive than the rest. House your turtle needs in a very big terrarium for it to live in throughout its life. Bear in mind that they are large animals. A 40 gallon tank is ideal. Keep your tank environment friendly by planting live plants in it, these plants give oxygen for the water and give your turtles a better panoramic look.

They need sanding; never try using gravel or rock that causes severe harm to your turtles because their shell is soft. They play with sand burying themselves, with just their heads exposed and waiting fotb fish to come by.

Hatchlings in particular need extremely clean water; the best way is to purchase twice the filtration that you regularly require for your tank. (E.g. A 40 gallon aquarium = 65-80 gallon filter). Retain the depth of the water in your tank since Softshell turtles swim vigorously.

It is better for beginners to gain a little experience with another type of breed initially, because soft shells are not just right for starters.