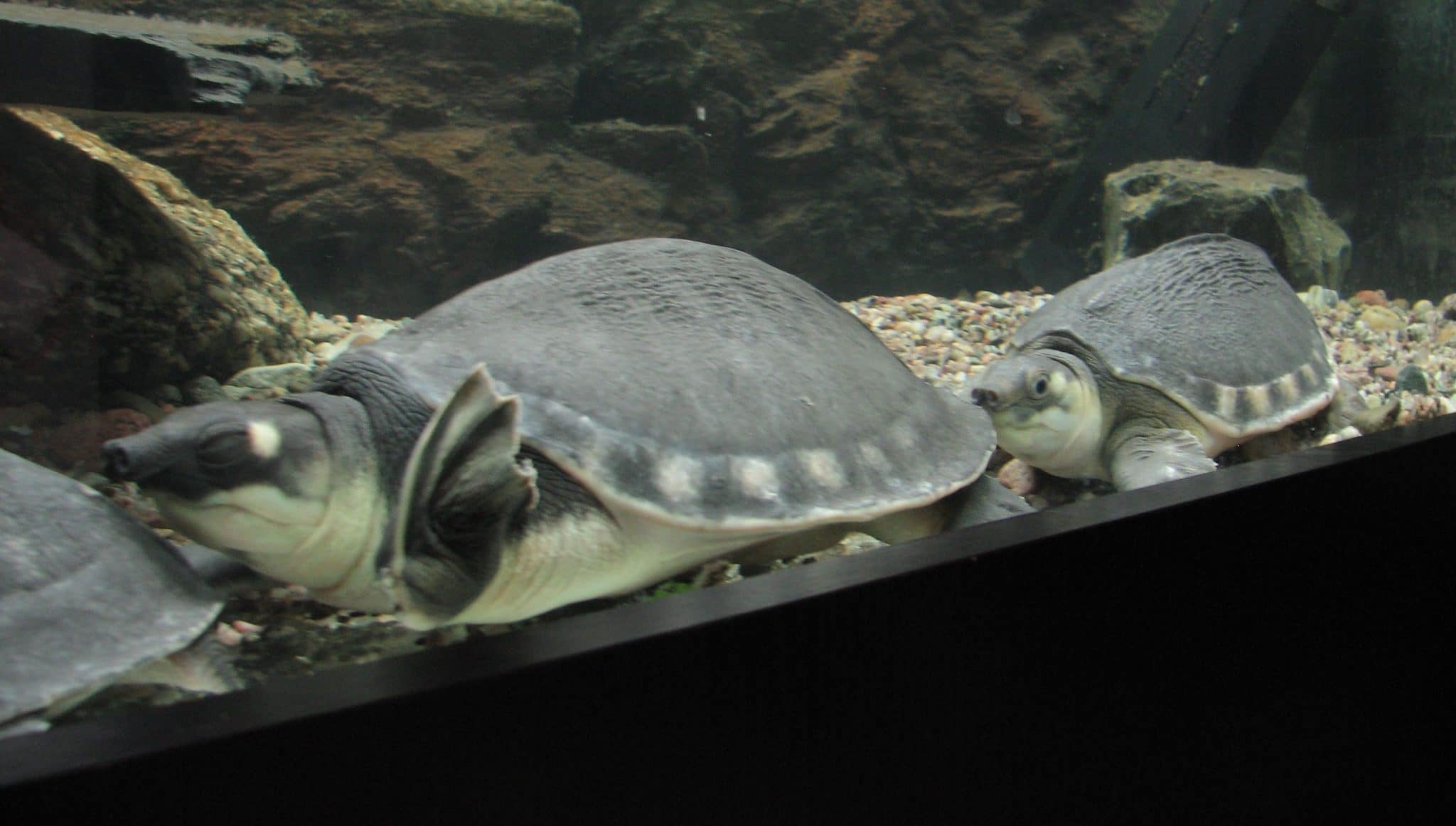 The pig-nosed turtle is a unique species thriving in freshwater, having flipper-like feet like those of marine turtles. The nose of the turtles resembles that of a pig, as the name suggests. They also have nostrils at the end of the pulpy snout.

Usually the carapace is bony and leathery, being olive or gray color and the plastron is cream in color. The male tortoises have comparatively long and thin tails than the females. The pitted shelled turtles have shells about 70 cm or 28 inches long and a weigh about 20kg (44lb). The plastron is hard and links with the carapace by the aid of a firm bridge of bone.

In the young turtles, the plastron is of pink shade. In case the plastron turns reddish in adulthood, it is a signal that the water is poor in quality, which can even lead to the death of the animal.

The turtle thrives well in freshwaters like lagoons, streams as well as large or small south flowing water bodies of the Northern territories of Australia and New Guinea.

Being omnivorous in nature, they prefer a wide range of animals and plants; fruits or leaves of composite fruits and insects, crustaceans or mollusks. While the male turtles become sexually mature at 16 years, the females take two or three years more. The dry season serves as the ideal time for laying eggs on river banks. Even when the young ones are ready to come out, they will wait for suitable conditions before emerging from hibernation. In case there is a fall of air pressure or flooding around the eggs, indicating an approaching storm, they start hatching early. The environmental conditions allow the young turtles to survive better as they tend to hatch together, and thus they remain safe together, by helping each other to dig into the surface of the sand.

Recently, the pig-nosed turtles have become popular across the globe for its exotic trade and captive breeding. The young ones grow fast, but their excessive cost and huge probable size make it possible only for experienced keepers to take care of them. The juveniles are introvert by nature, easily stressed, and fall sick often. Usually they prefer vegetables, fruits or the processed trout chow or pellets available for turtles. The adults are combative in nature, and often fight with each other, which is a serious problem for the turtle keepers. The adult huge turtles are very fast and need clear, warm tropical water and ample space to thrive well. Fungus can easily affect them and might even lead to death. Thus, keeping the adults is costly and during the late 2004, CITES II (the Convention on International Trade in Endangered Species) has included them in their list.

The pitted shelled turtle best feeds on a wide range of figs, eel weed (Vallisneria Sp.), apples and several other fruits, shrimps and eel whitebait (Pisces). However, you would do well to include Mazuri, Zoo MED, and similar type of special tortoise food enriched with it. D3. UV-B penetration of water is necessary, along with Vitamin D3 supplement. Aquatic plants like water lettuce, wafers of spirulina algae, Flavia etc., should form part of the diet.