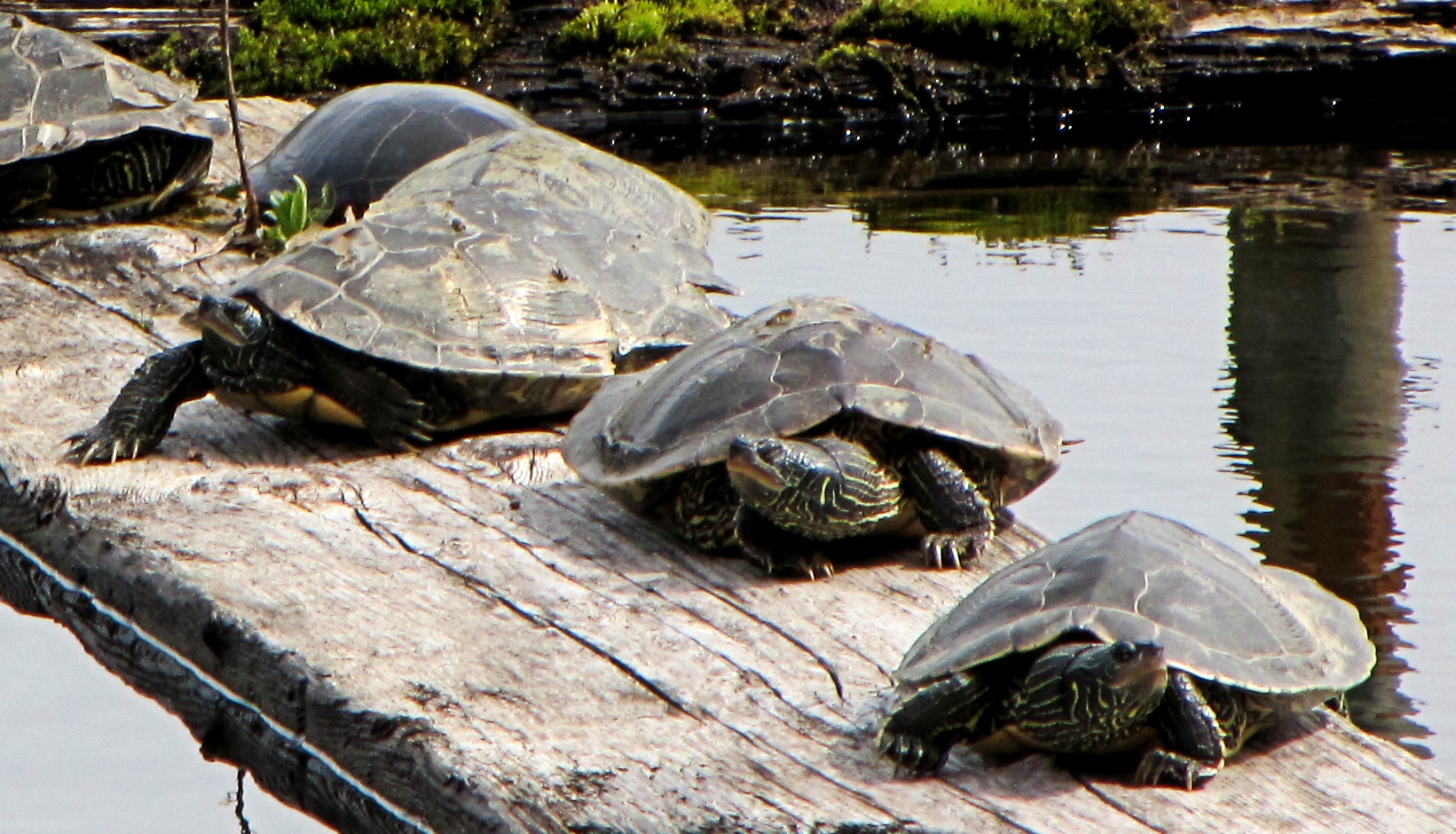 The northern map turtle (Graptemys Geographica), before called as the common map turtle, is an aquatic turtle regularly found in North America, they of the Emydidae family.

The common map turtles hibernate in the lakes, river-bottoms and ponds. They prefer plenty of aquatic plants. For the purpose of breeding and basking, they love places with debris, fallen trees and large water bodies.

The common map turtles select dry areas for depositing their eggs. Their greatly preferred sites are sandy soils that do not have shade. May to June is their nesting period. Most of the time they mate in deep waters, they breed in the fall and spring season. The fully developed males are comparatively smaller than their females; they grow only up to 5 – 6 inches, whereas most of the female species attain a length of 7 inches.

The claws on the front feet of the adult male Gratemys stretch to a great extent and they use them especially when wooing. The male encounters the large female and “fans” her face, vibrating its four claws against her head to induce her to cooperate in mating.

Male turtles have explicit and unique needs, you usually see them in clear and fast-flowing rivers in the wild, and as such they need enough filtered and oxygenated water in their enclosure. For two or three babies a 20 gallon long aquarium is sufficient, but the keeper should ensure that he keeps the water clean. For this, an outside filter placed on the back and a small air generator at one end for supplying additional oxygen and turbulence to the water provide enjoyment to these turtles. They also love basking; therefore add some driftwood, give them some place to rest and place a UVB for supply of heat.

These map turtles become aggressive during their growth. Larger turtles, particularly females, are often violent with their subordinate males and to the other smaller turtles in their group. Therefore, it is vital to add enough decorations and one or two separate basking spots in order to avoid congestion.

Outdoor ponds are where map turtles flourish. You would do well not overcrowding your outdoor enclosure with map turtles. Adding plenty of floating aquatic ponds such as (duckweed, water hyacinth and water lettuce) maintains a high level of oxygen as well as keeps your outside map turtle’s pond fit.

Map turtles bask avidly; therefore, give at least one large basking area. Northern varieties do hibernate, hence ensure that you create a fairly cool spot for hibernation. During the coldest time of winter, bring the southern species indoors, especially when the temperatures drop below 45° to 50°F. During this period, keep a cool temperature to motivate courtship and breeding in the warmth of spring, once they are out in their outdoor enclosure.

Basically, map turtles are omnivores. While they are captives, their diet consists of a variety of floating turtle food and plenty of aquatic plants. Significantly, juveniles and hatchlings consume more plant products than the adults. As a result of the natural diet comprising of crayfish, and hard-shelled snail, their jaws become large and muscular. In addition, they also consume a large array of insects. They take great delight in eating krill and freeze-dried shrimp. When you have map turtles in captivity, they suffer from shell ailments. Without an indoor UVB, and natural sunshine, mild fungal infection infests them.

Gently handle your turtle, so that your turtle gets used to you handling. Take it out of its enclosure regularly. Never nudge your turtle’s head to see it retracting, keep your turtle on its back, nor lift it up by its tail or either of its limbs. Bear in mind that turtles have incredibly sharp claws and they also bite.