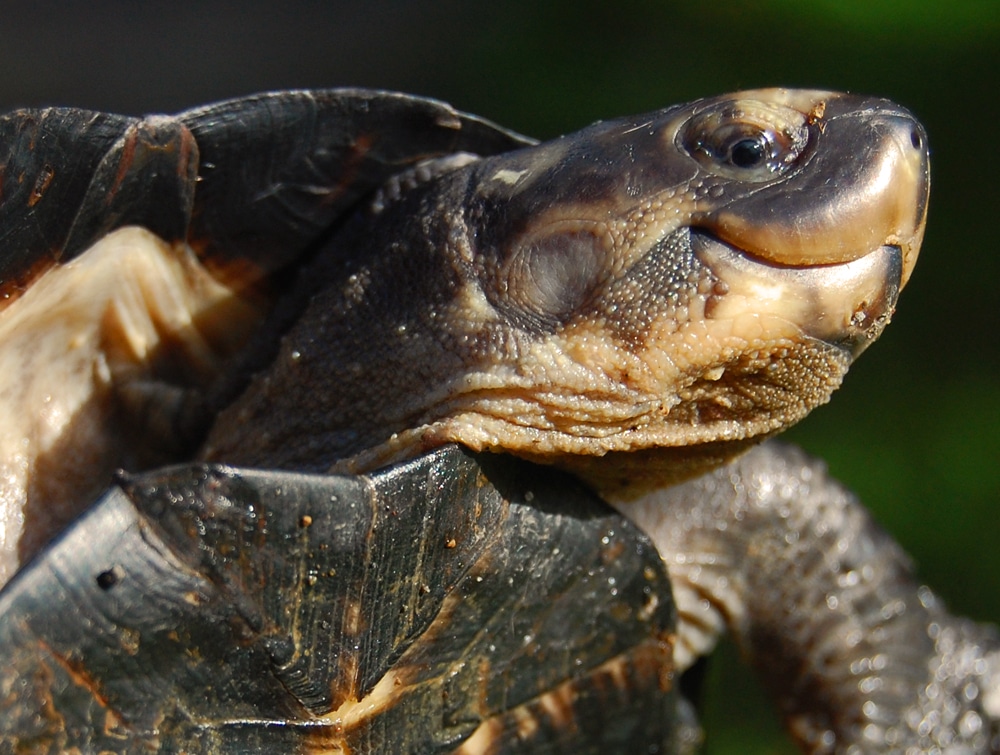 The Eurasian pond and river turtles as well as Neotropical wood turtles belong to the Geoemydidae ( formerly Bataguridae) family. They are very large and diverse, belonging to the order Testudines (turtles). There are about 70 species.

Geoemydidae turtles vary in size (about 10 to 80 cm long) and are highly sexually dimorphic. They generally have webbed toes, and their flexible pelvic girdles interact fluently and coherently with the plastron. Their necks vertically draw back. The carapaces consist of 24 marginal scutes. The plastron consists of 12 scutes. They have no mesoplastron. The abdominal and pectoral scutes touch the marginal scutes.

The female Indian tent turtle is typically 1 foot (30.5 centimeters) long. The males grow to only about a third of the size of the female, The larger family members can weigh up to 110 pounds (50 kilograms). Many of them have upper shells that measure 81 cm or 32 inches in length

The members of the family live in the ocean coastline saltwater, freshwater areas that are inland and as terrestrials in forests. We can find them in the tropical areas of countries like China and the East Indies as well as Europe. You can also see them from northern Mexico in North America to Ecuador and Brazil in South America. They also live in subtropical regions bordering the tropics.

The males are generally more active than females in breeding. Each clutch has a relatively small number of eggs produced many times a year. In some species, the sex determination depends on the temperature. Others have varied sex chromosomes. Around 70% of the species are vulnerable, if not endangered.

Some of these pond and river turtles and Neotropical wood turtles are meat-eaters, some are vegetarians, while others feed on both meat and plants. In Chinese stripe-necked turtles, the young turtles, and males feed mainly insects, while the females are predominantly vegetarians, feeding mostly on seeds, leaves and roots of shoreline plants. According IUCN estimates, eleven species are Vulnerable, meaning that the risk is so high that in the wild, they will eventually become extinct. Eighteen species face a very high risk of extinction, or fall under the endangered list. Thirteen species face a very high risk of Extinction (critically endangered). You consider a species as extinct when there is no longer any turtle living in the species. The Indian sawbuck turtle and river terrapin belong to the endangered, category, according to the U.S. Fish and Wildlife Service. You can trace the causes for the decline of turtles to the loss of their habitat as well as to over- harvesting. Efforts are on to breed some of these most threatened species in captivity in order to increase their numbers.

Turtles are much in demand in the pet trade. The painted terrapin, for instance, is highly popular, since some believe that these turtles bring good fortune.