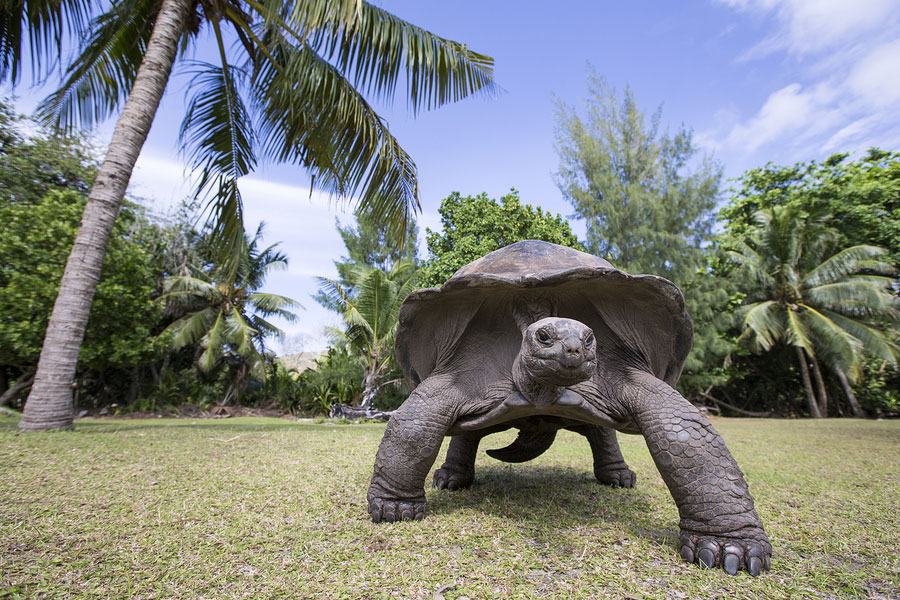 Aldabra Tortoise, Aldabrachelys Gigantean, has one of the longest life spans on earth.  They could very well have the longest lifespan.  Nobody exactly knows how long these animals live, If reports are true,  their life span exceeds 100 years.

These are definitely the biggest creatures living on the Island, The Aldabta tortoises hold a position similar to the elephants of Africa as well as Asia.  Like elephants, they are the primary vegetation consumers.  Similarly, they change their habitats, as they search for food.  They even uproot shrubs and even small trees for getting nutritious leaves.  This creates clearings and  pathways in the forest for other animals.  The seeds that pass through the  digestive system of the creature ultimately becomes the food of many creatures. The upper shell or carapace of the Aldabra tortoises has a  high dome shape.  The carapace sports brown or tan color.  The stocky legs with heavy scales provide support for its heavy body.  Their long neck helps the animals to reach tree branches as high as a meter, when they forage for food.

These giant tortoises are typically very cautious and slow.  When the situation arises, they can surprise you with their considerable speed.  Sometimes they perform dangerous  acrobatic stunts.   They rise on their hind legs very dangerously to reach low overhanging branches. They may fall over on their backs and   they will not be able to right  themselves. They even risk death this way.  The Mexican biologist, Ramfrez observed this behavior and promptly called giant turtles, the ninja tortoises.

The breeding season is between February and  May.  The female tortoises lay eggs in shallow nests.  A clutch can have 9 to 25 eggs.  The fertility of the eggs is less than 50% generally.  A female can lay multiple clutches of eggs in a year  The eggs hatch between October and December after incubation. In captivity, artificial incubation is more effective.  They hatch  faster  if you  incubate the eggs between 81 and 86 Degrees. Outdoors is  the best place to house Aldabra tortoises.  You  can keep the hatchlings up to two years indoors.  Beyond two years they need the freedom of the great outdoors to roam.  Tortoise tubs will do for babies less than a year old.  You should spread bark or crushed coconut at the bottom of the enclosure. You should provide a hot spot of 90 degree F at one end. The ambient temperature should be around 80 Degrees. Mercury lamps are ideal as they provide both UVB and heat.

The giant tortoises grow to very large sizes.  The bigger the enclosure, the better for them.  We can house them in pens made of cinder blocks.  The wall should be a bit more than two feet high.  The paddock area can be 100” x 30”.  The size of the paddocks can vary with the number  of pets you keep.

Though they are primarily vegetarian, These giant opportunists are flexible in the matter of diet.  When it comes to nutrition for survival, the tortoise may feed on small  invertebrates or even carrion.

These giants are smart, entertaining and have great personality. Just watching them is a great way of relaxing.