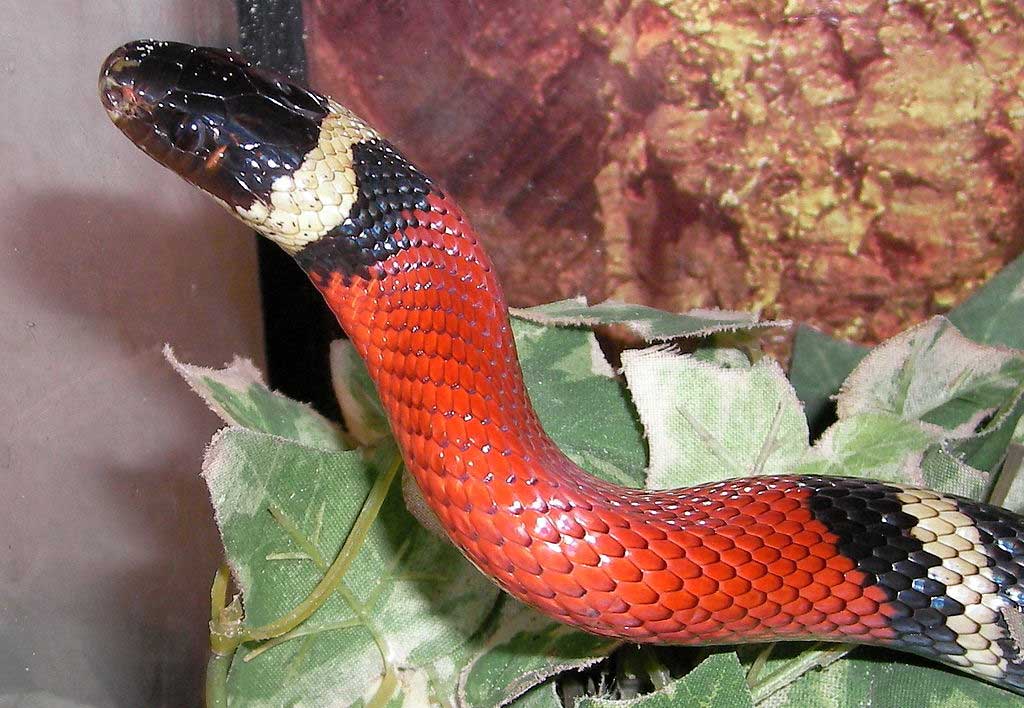 Milk snakes belong to the species of milk snake Lampropeltis Triangulum.  The French call them Coulevre Tachtee  and in Spanish, they are known as Culebra-real Corallilo. The milk snake belongs to the  king snake species. Scarlet king snakes were classified as a sub- species of milk snakes before.  Now it is considered as a different species. Since the differences are striking in the subspecies, there are suggestions that can be they be split into separate species. Milk snakes are a nonvenomous species and do not pose any danger to humans.

We can find the milk snake distributed all through eastern U.S and the southern regions of Ontario.  They frequent farms, looking for rats and mice. There is a mistaken belief that they suck milk from the cows. Hence, the common name milk snakes. Milk snakes are ophiphagus. They consume both poisonous and non-poisonous snakes. They appear immune to the venom of most of the poisonous snakes.

The Milk snake reaches lengths of  20 to 60 inches.  They possess shiny and smooth scales.  The color patterns can be yellow, black, red or red-white-black alternating bands. In some cases, we can see red blotches in the place of alternating bands. Certain milk snakes bear a striking resemblance to coral snakes. It is possible that this phenomenon, called Batesian Mimicry, is a way of keeping the potential predators at bay. These snakes are very curious creatures. They love to explore their surroundings. You can try changing their vivariums’ lay out occasionally.  Your pet milk snake will not be bored, since it will be busy exploring its new surroundings.

Milk snakes are territorial reptiles.  They will make themselves at home in the vivarium in a couple of weeks. Sometimes you will find them totally defensive and musking more in their vivariums, you can be sure that they are busy marking their territories.

These snakes are comparatively docile creatures.  They tame easily.  They are active and curious. These are qualities that make them interesting pets. They are not difficult to handle and their sizes are manageable.  If you are new to the hobby of keeping snakes, milk snakes make a good choice.

Since this species are widely distributed, there is marked variation in habitat. Generally, they inhabit forest regions.  We can also see them in prairies. In many areas, you can find them living comfortably on rocky slopes.

Female milk snakes lay 2 t0 20 eggs at a time.  The average is around 10.  The eggs are elliptical in shape.  They deposit these eggs in warm, moist, leaf litter.  The hatching period is between 28 to 39 days. The hatchlings range between 14 to 28 centimeters in length.  When they are hatchlings, they have striking colors. Bright orange, purple, red and yellow colors abound.  These colors gradually become dull with age.  The snakes attain full growth in three to four years.

Mating period is between early May and late June. The eggs remain concealed under rotten vegetation, logs and rocks till they hatch in the months of August and September.

These snakes are very energetic reptiles.  However, huge enclosures are not necessary. A fish tank of medium size can be a sufficient enclosure. For each foot of the length of the snake you have to provide only about one square foot of space.  The height of the enclosure can be around one third of the length of the snake.  It is better to accommodate hatchlings in small vivariums  since they may get stressed and stop taking food if the vivarium is oversized.

Snakes, as a rule, are very adept at  escaping.  You have to ensure that the vivarium lids are clamped down.  Being strong, the milk snake can push loose lids and make its escape.

Some milk snakes reach around 6 feet in length. For them to feel more secure, it is better to go for a vivarium of suitable size like 4ftx2 feet for the adults.
Warning: These snakes are notorious for their cannibalistic nature.  House these snakes individually.  You do not want to wake up one fine day to see that one of your pets has eaten another.

Like all reptiles, milk snakes are cold blooded creatures.  When they need warmth,  they simply bask. If they feel very warm, they move to a shady place. This process is called thermo-regulation.  Ideally, the warmer end of the vivarium should have a temperature of 27 to 33 degree C.

Milk snakes need hiding places in the enclosure.  Otherwise, they tend to get stressed.  A flowerpot or a cardboard with a hole will do the trick. The cardboard box can be easily replaced.

You can provide tree branches or artificial plants in the vivarium. The snakes will use these for climbing or resting.  These will also be helpful for them when they shed their skins. Climbing will help the snakes to be  energetic and provide much needed exercise.

Milk snakes require fresh water daily for drinking. Give water in a bowl of sufficient size. The bowl should be heavy enough so that your snake does not tip it.  Water is also helpful to the snake at the time of shedding. During this time, you can observe the snake enjoying a bath in the bowl. In their wild state, Milk snakes have a varied diet which consists of rodents, amphibians, other reptiles, which may include snakes and birds. Captive snakes are happy to be fed mice and rats all the time. They stay healthy on this diet. When you feed them rodents, make sure that they are of the proper size in relation to the size of the snake’s mouth. At the same time, they should not leave a bump in their body after they swallow it.

You can feed the hatchlings pinky mice once in 5 to 6 days. When they grow, you can feed them once every seven to ten days.  If the snake is very large you can consider giving them two mice or even a rat. You can give them one day old chicks just to provide variety.

Never, never offer your snakes live food. Even a small prey item like a mouse is capable of biting and injuring your pet snake.  You can buy frozen rodents from pet shops or over the internet. You can feed the snakes these after thawing them to room temperature.  Never give them wild rodents as they usually carry parasites.

You can give your snake one defrosted mouse every alternate week.  For the entire lives of your snakes, you can feed them mice, mice and mice. Give them pinky mice when they are hatchlings and graduate to bigger mice, as they grow.

You simply have to overcome the urge to feed your pets more often and more than what they need. If you overfeed them, the snakes will start growing too fast,  but the head will not grow at the same pace as the rest of the body.  Obesity can be a serious problem with  snakes too!

An overfed snake has no reason to move around at all.  Lack of exercise can be potentially harmful  even for snakes.

The easiest way to feed your pet snake is to place its food near it and leave.  You can also use tweezers or tongs to offer them food.  You can enjoy the sight of the snake striking quickly and trying to constrict the frozen mice.  Some snakes desist from taking food when they are shedding.

Milk snakes seldom bite. They may,  if you restrain them too much. You should be able to hold the snake gently, without applying any force or pinching them. Allow the snake to move through your fingers.  Do not dangle it. Some Milk Snake subspecies can be ill tempered or nervous. Central American species are quite well known for just that. Do not, ever, handle the snake  immediately after feeding. Since these reptiles regurgitate their meal, it could be a little unpleasant for you.