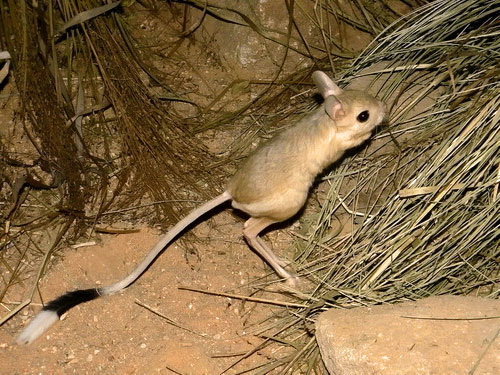 This undersized Jerboa appears as a perfect combination of assorted spare parts of animals, yet it splendidly adjusts to harsh surroundings similar to the Sahara and Gobi Deserts. It has association with Dipodidae or “jumping rodents’ family”, including various genera. The Jerboa comes from one among the three genera that consists of over 2 dozen varieties, of which over 20 of them are in Asia. The Greater Egyptian Jerboa (jaculus orientalis) is a variety of rodents of the family Dipodidae.

The hind legs and feet of the Greater Egyptian Jerboa are very long, like that of the kangaroo, even though their forelegs are comparatively small, bearing full-grown claws meant for sifting through sand in search of food. It bears a coat colored pale/ sandy, a long tail having at its end a tuft of fur, ears and large eyes that help to keep them away from predators and notice fast movements. They have a 7 to 15 cm long body.

The Greater Egyptian Jerboa (jaculus orientalis) is quite friendly. You can often see them in small groups. The greater Egyptian jerboa is an herbivorous rodent, and hunts during the night for food. Mostly they prefer to live alone; these jerboas live either in the colonies or alone in their burrows.

The Greater Egyptian Jerboa (jaculus orientalis) is a variety of rodents of the family Dipodidae. You see them in Israel, Algeria, Morocco, Egypt, Libya, Tunisia and Saudi Arabia. In nature, they live in the dry tropical or subtropical shrub-land, arable regions as well as the sandy coasts. You see them taking shelter and feeding on desert truffles. In case you think of breeding a Greater Egyptian Jerboa, it is vital that you are ready to generate a large environment with a surrounding of live vegetation and temperature. They mate immediately after they return from hibernation. When you compare jerboas to other rodents, they have an extensive weaning and a gestation period (six weeks). Following seven weeks after birth, they become bipedal. Until then, the little jerboas trod slowly, making use of their little forelegs to pull their hind legs and body forward.

When something troubles Jerboas, they jump high and move very fast. Therefore, they need a very spacious area to move about. The smallest size of enclosure needed for a 2 G Jerboas is 2’w x 3’lx 3’h. A bigger enclosure is ideal since these active jerboas need enough space to play. Make the enclosure with material such as Plexiglas or glass with a screen lid. In case your enclosure does not have enough space or if your substrate is not sufficiently thick, it is possible for the jerboas to develop severe leg and joint problems. In addition, offer them with a big tube similar to a tunnel, a nest box and a chinchilla dust bath. Jerboas leap to a height of three feet.

Some of the Greater Egyptian Jerboa can live with less water. Take care that the diet of your jerboa includes a good measure of fresh foodstuff like carrots, green and red bell peppers, alfalfa sprouts, kale and cucumber. Give them only the roots and leaves and not the fruit. In addition, provide them with a mix of good quality millet and canary mix. For assisting digestion, add hay in the diet. Also, provide them with rehydrated lentils as a protein supplement.

It is too early to decide whether these Jerboas are ideal as pets; they stay secretive and very weary. They rarely bite, but if they grow angry or become scared, it is possible that they will give you a very strong kick. Greater Egyptian Jerboa is very shy and subtle and tries to avoid handling.