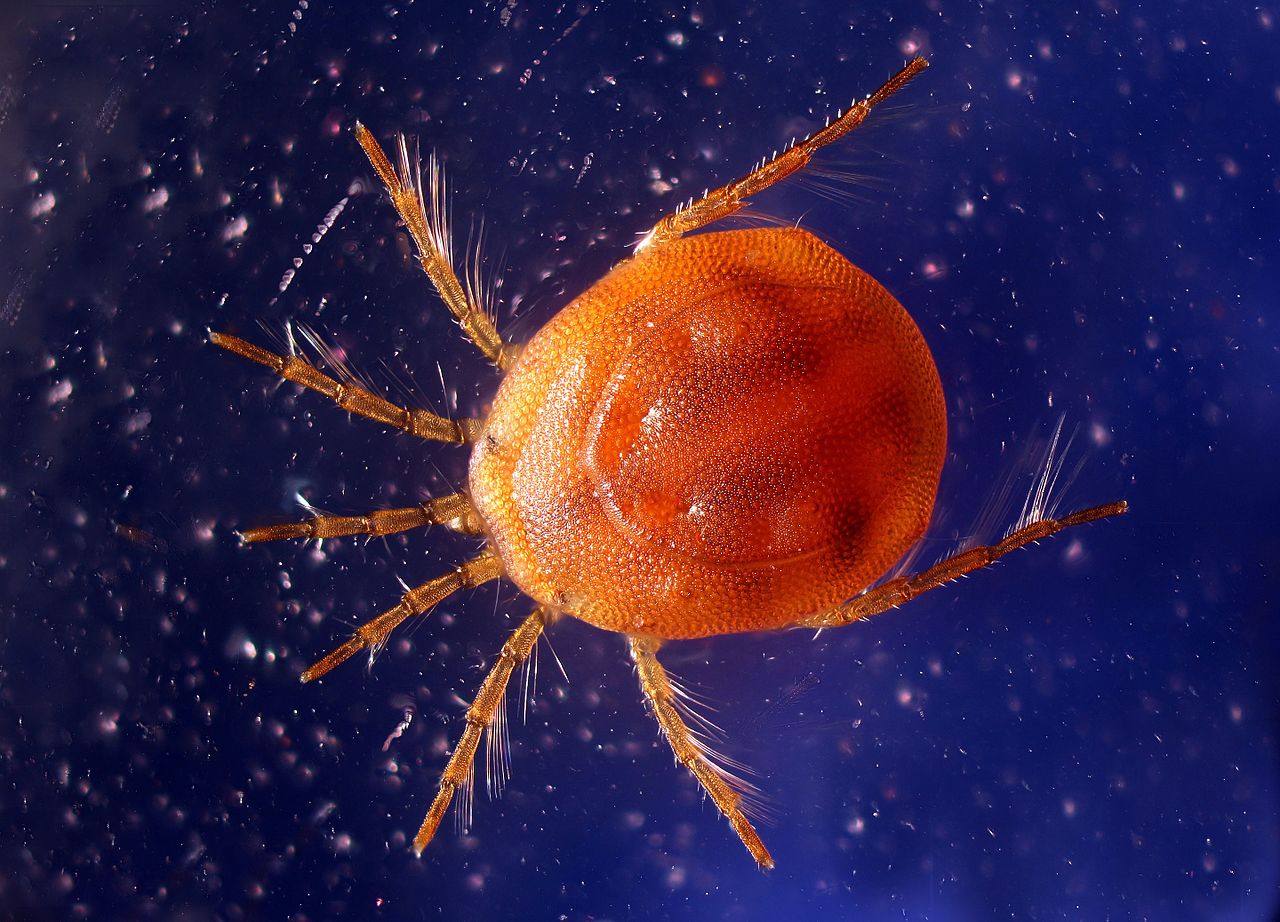 Water mites or Hydrachnidiae, Hydracarina, or Hydrachnellae are a class of mites, comprising of over 5,000 varieties and wrapping up 40 families. They dwell in marine and fresh water habitats. Since a proper study was not conducted on the water mites of Asia, Africa and South America, a higher number is expected. The other taxonomic group of parasitengone mites, (Prostigmata: Acariformes and Parasitengona) have a unique life cycle of a modified type, where developmental active stages (normally both functionally morphologically) rotate with the inactive stages (with regressive functionally and morphologically).They are called protelean parasites and comprise the partial aquatic inhabitants. However, the true sub-aquatic ones are the Hydracarina. These mites live in different bodies of freshwaters, like hot springs, tree holes and waterfalls, and also there are others used to live in marine aquatic surroundings.

Water mites exist in a variety of species. The length of the full grown Arrenurus mites is about 3 mm and their color is normally greenish or brownish. Females are smaller than the males.

Arrenurus mites remain at the base, they reach their destiny by either crawling or swimming, after which they return to the base for relaxing. They are agile except when the day is bright.

Their activity includes running about either on growing water plants or on the top face of the water, searching for insects that are their hosts for them to parasitize on. In the biological category obtained in detail, the larvae stay beneath the water, hunting for preimaginal larvae (stage in insect development that immediately precedes the imago), growth stage of the insect before the imago stage, similar to the pupa or Odonates (Dipterans is an example).

Water mites are no different from the other mites; they too belong to the class of spiders. Similar to the spiders, their bodies are soft and they possess 8 legs.

Right from the infant age till the adult age, the aquatic mites dwell under the water Sexually, they occur in two forms in the same species, especially in those biological categories where the sperms of the males are directly shifted to the females. Obviously sexual intercourse takes place continuously among the water mites from the inherited way of transferring the sperm through spermatophore that is left on the substrate. The complete methods of transfer of sperms (through sexual intercourse, paired, although indirect and fully detached) that takes place among water mites are totally different from the other class of arthropods.

The life cycle of water mites is exciting. Following mating in early summer or late spring, the female mites deposit their eggs either on water plants or on stones in the water. A single female lays as many as 400 red eggs at a stretch. According to the temperature and the type of mites, the eggs hatch within a span of 1 to 6 weeks.
The hatched larvae of the mites possess just six legs; they are parasites, as such, immediately they swim in search of an aquatic insect, to live as a host on them. Dragonfly naiads, fly larvae (inclusive of mosquitoes) stone fly nymphs, true bugs and damselfly naiads are some of the insect hosts that they choose. One insect host supports almost 20 larvae mites.

The larvae of the water mites chew the host, as they are carried by the host. After they are sufficiently mature, their exoskeleton (external shell) turns into a bag. While the larvae are in the bag, it turns into a nymph. In the process of transformation, the “bag” remains joined to the host.

The nymph sets free the host as soon as it is ready, then its legs becomes eight in number, when it resembles the adult water mite, to a great extent.

Aquatic mites skip the pupa stage; their metamorphosis is not complete. Therefore, its life cycle passes through 4 stages, such as egg, larvae, nymph and adult.

The fertilized eggs of the female normally fasten to the water logged water plants. The aquatic larvae mites hatch from their eggs submerged in water, they either crawl on the water or substrate searching for a source of food, or swim on the surface. The food which the water mites feed on is similar to what their adults eat; these are aquatic worms, tiny insects and new mites (also their own variety). Nymphs proceed to eat and grow, preparing for the 4th stage (The 1st 3 stages are eggs, larvae and nymph).

Every nymph searches for algae, or aquatic plants or some object which they need to get attached to. Then the nymph reduces its size and enters into a different “bag” for a period of 7 days till it gets transformed into the adult stage.

Larvae swell up on the haemolymph host and melted tissues from some days to many months; this depends on the biological category to which they belong. The swelled up larvae falls from the host and returns to the water.

Opponents of the matured water mites are crustaceans (like scuds and water fleas), aquatic insects, tiny fish and hydras.