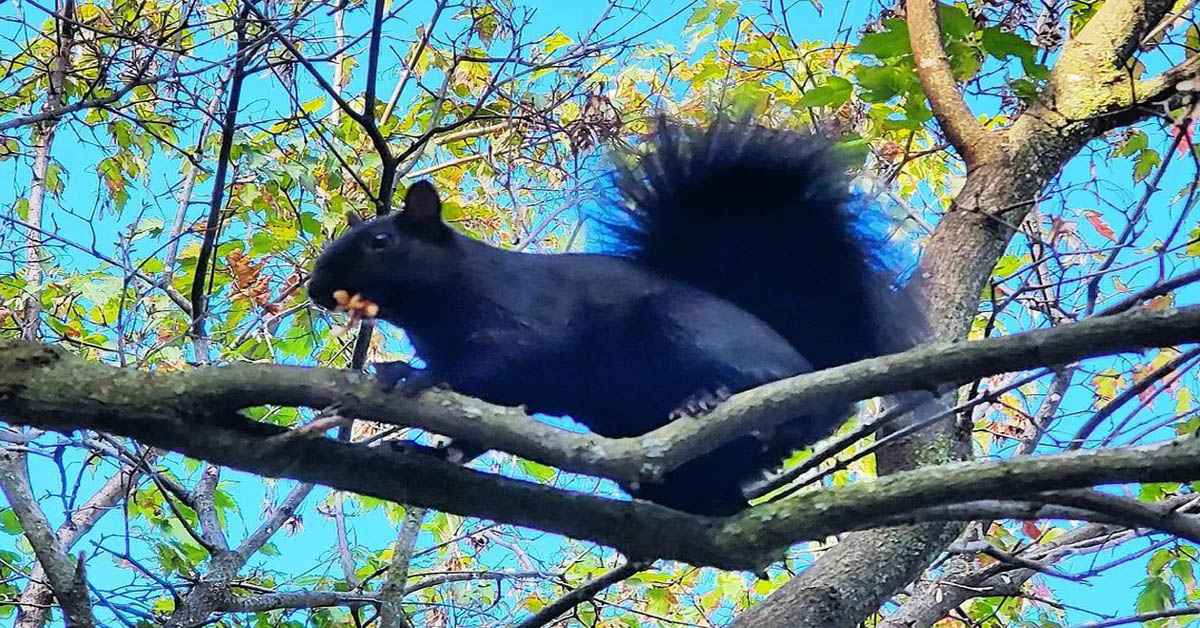 Squirrels are adorable creatures, and watching them jump around from brunch to brunch can be pretty entertaining. It is impossible not to love those small rodents’ adorable fluffy tail and large eyes. There are many different species of squirrels. However, the black squirrel is one of the rarest.

Black squirrels are extraordinary creatures because of their color. In this article below, we will explore those little creatures.

The Appearance of Black Squirrel

Why Do Squirrels Have Black Coloration?

There have been several types of research conducted regarding this specific phenomenon. The main goal was to explore why this black morphing appears. Some scientists believe this is a selective advantage for individuals living in the northern part of the country, and this black fur gives them thermal protection against the cold weather.

There are two major reasons and theories in science that describe the black coloration of squirrels. They are thermoregulation and crypsis.

It has been hypothesized that black squirrels possess a concealing advantage in wooded environments in the northern sections of their range, where conifer trees are more common. On the other hand, regular gray squirrels have a similar advantage because they live in deciduous woods.

The notion is based on the assumption that woods with a predominance of coniferous trees prevent more sunlight from entering the forest below, creating a darkly lit ecosystem in which a squirrel with a darker coat would be better able to conceal itself than one with a lighter coat.

It is also hypothesized that in deciduous woods, non-melanistic squirrels are better able to hide than the black ones because deciduous trees lose their leaves regularly, revealing the forest floor throughout the winter.

It has been hypothesized that massive deforestation and squirrel hunting contributed to the population reduction, with the drastically altered habitat giving a non-melanistic gray-colored advantage in camouflage.

Scientists have observed that black squirrels have an ability to tolerate low temperatures better than regular-colored ones. Animals with black coats lose less heat in conditions below 10°C (14°F) by 18% and have a 20% lower metabolic rate. Researchers studying the color morph have also discovered a substantial negative link between the prevalence of black squirrels and regions with high air temperatures.

As already mentioned above, the black color is an advantage for the specific squirrels that live in the north. Thermal protection is especially helpful in low-temperature environments. The black squirrel is native to the northern part of the United States, Ontario, and Sudbury.

About a year after they are born, black squirrels begin to reproduce. They breed in the middle of December or the beginning of January, and a tiny portion breeds once again in June. Only one breeding season may occur in a young squirrel’s first year. The gestation period typically lasts between 42 and 45 days.

To care for their young, females spend a lot of time in their nests. The black squirrels do not form groups, although males will assemble in a female’s area to vie for her attention and the opportunity to mate.

During the mating season, several or one male chases after the females. Tree squirrels typically have three babies in a litter. They are born with closed ears, no hair, and no sight. Infants weigh around 1/2 ounces at 2 weeks and 3-4 ounces at 5 weeks. They weigh roughly half as much as adults when they are weaned.

READ MORE:  What Do Squirrels Eat?

The young start to venture outside the nest around 10 to 12 weeks. A colony of squirrels often loses 50% of its members each year. Squirrels older than four years old are uncommon in the wild, although they may survive up to ten years in captivity.

So, to cut a long story short, the two gray squirrels may have black offspring. After mating the black and gray squirrel, the baby may develop a brownish color. This is because they may inherit the gene responsible for black pigment from their black-colored parent.

Additionally, parents that have brown fur may have gray-furred offspring. This can be because of the reason that they only have 1 copy of the black genes.

Squirrels spend the vast majority of their time in the trees. They typically live in nests built from sticks, leaves, and other materials. Their nest is called a drey. Those structures are perfectly fit to protect newborn babies and are like a shelter for black squirrels.

The black squirrels can be found in the areas of North America. However, their fur color can vary according to the environment. Black squirrels are very rare, and their rate is less than 1% of the overall population. It is believed that in the wild, there are only 10,000 individuals of black morph squirrels.

The two states with the largest density of black squirrels are Ontario and Michigan, where they also predominate as a color morph. It is believed that 56 and 66 percent of all squirrel records belong to the black morph. There are sizable populations of black variants in the other provinces and states that border the Great Lakes, with around 15% of squirrels in the areas being melanistic.

Apart from the United States, the black squirrel can be found in the territories of Canada, Quebec, and even Britain.

What Do Black Squirrels Eat?

Females must take care of numerous young squirrels after mating, frequently occurring when the temperature is higher and it is warm outside.

Baby squirrels are only nourished on their mother’s milk. This typically lasts for around 10 weeks. The young squirrels are then prepared to begin hunting for their typical omnivorous diet. Black squirrels can hoard food to consume it again in the winter.

They are extremely picky when choosing food and do not consume anything that is not up to their standards. They will not eat food that hasn’t yet matured or has low nutritional content because of their extraordinary sense of smell. After identifying a suitable one, scatter-hoarding squirrels will place the food in their mouth before looking for a decent piece of ground to bury it under.

Nuts appear to offer the ideal balance of nutrients needed to grow and develop. The main components are fat and protein. Those two keep the black squirrels warm and energized in winter. They consume a lot of plants. However, because their digestive system is not designed to consume products with cellulose, they have to rely heavily on nuts.

Squirrels consume the majority of nuts. However, they tend to prefer pecans, acorns, and walnuts. Squirrels often consume a variety of seeds, nuts, grains, fruit, leaves, fungus, and occasionally even bark.

Despite spending most of their time in the trees, these squirrels descend to the ground to look for food and bury food scraps. Instead of hibernating, they rest in their nests during violent winds or storms, only emerging to look for food.

We’ve just explored a rare and cute creature – a black squirrel. Black squirrels are fascinating mammals because of their black-colored fur. The interesting fact about them is that they are not separate species. Instead, they belong to a group of gray squirrels. Their coloration is caused by the genetic mutation that causes melanin.