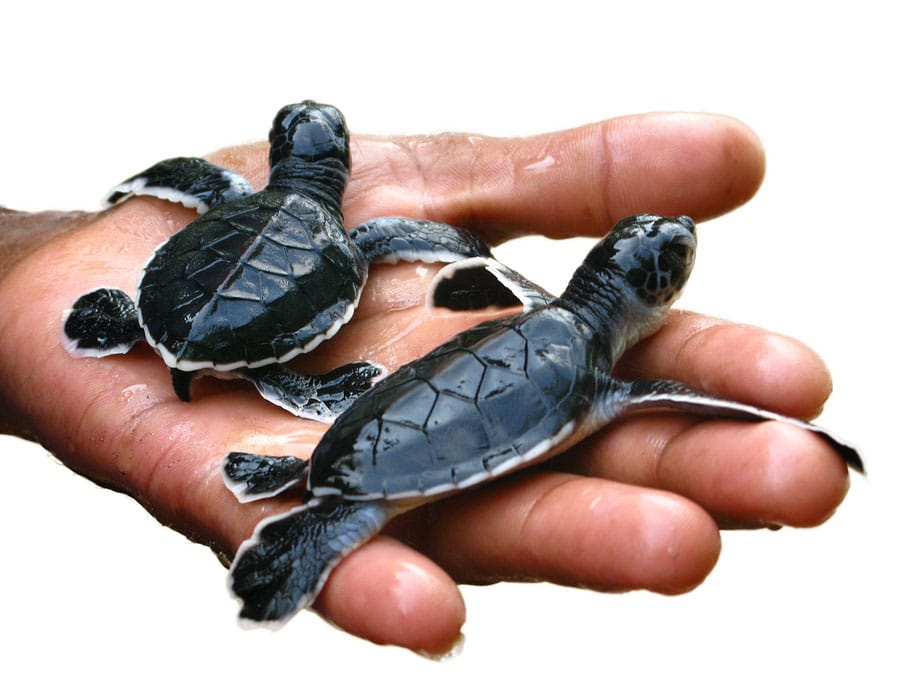 Among the seven varieties of sea turtles that fall into a group, from leatherback to loggerheads, six are dying out or in danger of existence, on account of inhuman activities. The miserable truth is that they encounter many hazards in their course of journey in the seas – such as unintentional capture and getting entangled in fishing gear (also known as bycatch), lack of nesting facilities and feeding locations because of coastal development, deliberate hunting (poaching) and pollution of the ocean.

Other than coming to the surface to breathe air, they are well adapted to ocean life. According to their species, they vary in size to a great extent, starting from the tiny Kemp’s Ridley, weighing from 80 – 100 pounds to the gigantic leatherback that weigh over 1000 pounds.

Sea turtles exist all over the world with their homes in tropical and subtropical beaches in every ocean. They travel extensively in search of food, many times crossing the whole ocean. Certain loggerheads have their homes in Japan and travel to Baja, California Sur and Mexico in search of food before they go back to their homes Leatherback turtles have tolerance to cold temperature. They endure the coldest water temperatures (even below 40°F) you can see them in the extreme north in Alaska and in the extreme south in Chile.

Throughout their lives they live at sea except when the females, step onto the shore for laying their eggs many times in a season, in once in every two or five years. Sixty days there after the juvenile sea turtles (called “hatchlings”) appear from their sandy nests and dive into the ocean, pulled towards the far-away homes. The infant turtles live for some years in the open ocean and then, gradually travel to protected inlets like estuaries and adjacent shores.

Their diet differs according to their species. Loggerheads eat heavy-shelled animals eat clams and crabs; Greens feed on sea grasses, hawksbills depend upon sponges and other invertebrates. Leatherbacks feed on soft-bodied animals and jellyfish while Kemp’s Ridley has a choice for crabs.

You find Sea turtles scattered all around the world except in the polar region. They favor the subtropic and tropic temperatures. We find them in the coastal regions of sandy beach in Australia, South America, North America, Central America, South Africa and India. Atlantic Ocean near Canada and regions of Europe are the other places where you can see them.

At times we find sea turtles in unexpected locations, thus researchers speculate that turtles confuse their migration route. Perhaps unintentionally they get entangled in the fishing net and get discarded away from their homes. Others follow the notion that this is because of global warming and migration for food.

When necessity arises, we see few sea turtles living in much cold water. For instance, at times when sufficient food is not available for them to survive in their natural environment, they travel longer journeys to fetch food; in the course of their journey their expedition leads them to colder waters.

It is very interesting to learn about the way sea turtles migrate. For the purpose of mating, they make long journeys; they then revisit the sandy beaches (where their parents originally hatched them) to lay their own eggs, the distance covered from their present place is not a matter of concern for them. But if in any case, when they revisit the place to lay eggs, they find these beaches devastated by human beings, they refrain from laying eggs. These age-old creatures existed on earth over 100 million years ago considering that even the dinosaurs became extinct 65 million years ago. The main threats faced by the marine reptiles are the loss of their habitat, entanglement in the fishing gear and exploitation of their meat and eggs by human beings. When entangled in fishing gears, long-lines and nets, they drown. Destruction of the nesting places by development in coastal areas, impact on coral reefs, artificial lights from the buildings and houses affect the prospects of the hatchlings.

How Big Do They Get?

The sizes of sea turtles vary; the smallest of them are the Kemp’s Ridley turtles and the olive Ridley turtles, their length is about 2 feet and they weigh about 100 pounds, whereas the largest is the leatherback turtle whose length is around 6 feet weighs over 1000 pounds!

Do They Have a Shell?

Sea turtles swim with the help of flippers, which also helps them to propel them on the land, but slowly, which makes them an easy prey on land to the predators. The hind flippers help them in steering and the front flippers help the turtle in propelling through the water. Occasionally they use the back flippers for digging holes in order to lay eggs.

What Do They Eat?

According to the age and variety of turtles, they eat every kind of food that includes crabs, sea grass, shrimp, seaweed and jelly.

They have varied feeding habits. Some of them only consume plants while the others consume meat. There are some varieties of turtles that consume meat at the young age and later as they mature, they shift their diet only to plants; this is the reason we see a difference in the overall jaw structure of different types of sea turtles.

Baby sea turtles are very weak at birth. Adult sea turtles have only few predators. Mother turtles dig holes on the beach and lay lots of eggs. Then the mothers leave the eggs in the hole, and return to the ocean. The unprotected eggs become a main food for many predators. As soon as the eggs hatch, the hatchlings rush into the water. They are easy prey for predators at this point of time.