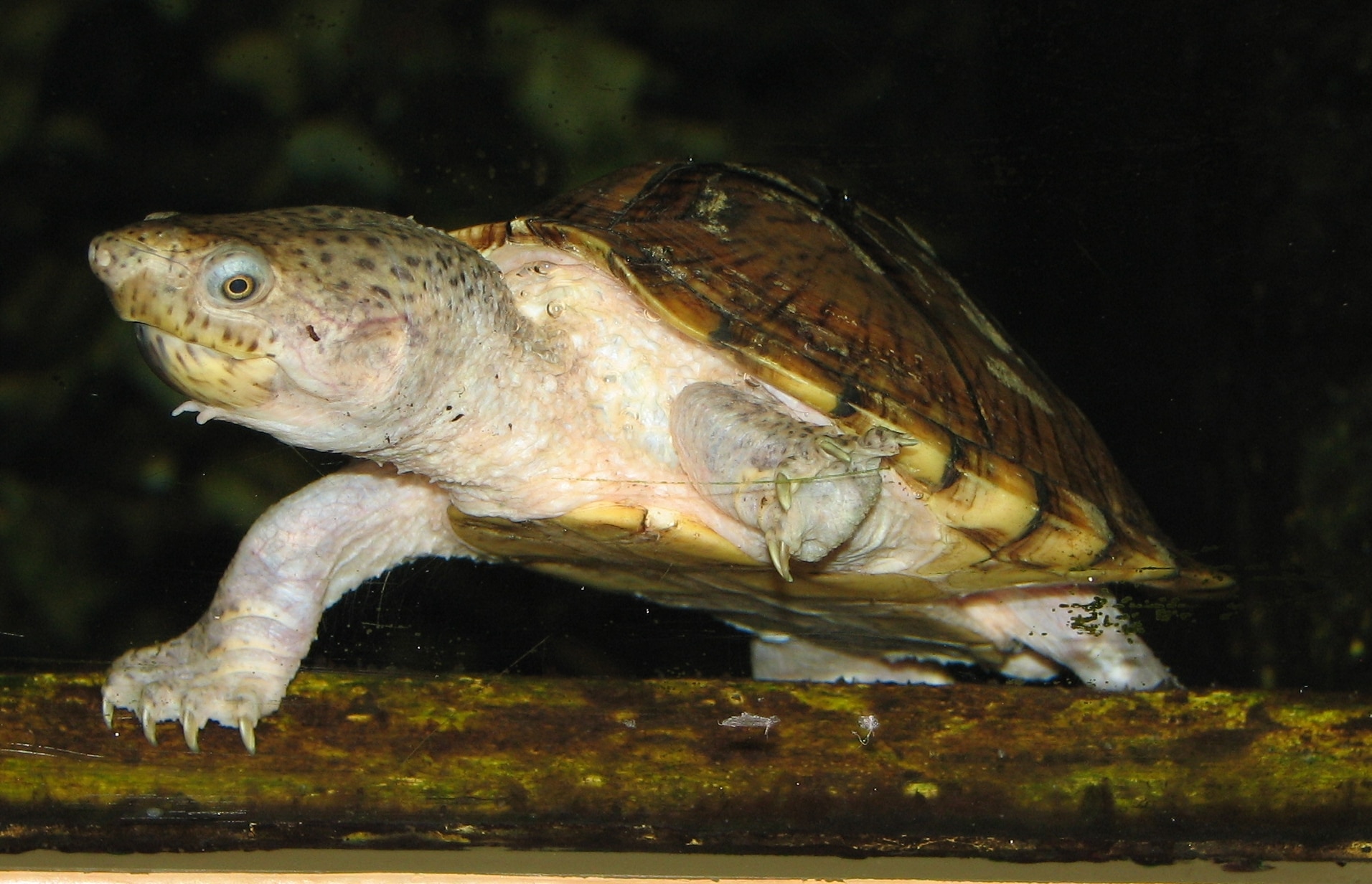 The usual musk turtles are tiny in size, 5 to 12 cm (2 to 5 in) in length. They have black or brown colored shells, either blotched or streaky and normally gathers algae. In their heads there exists a pair of distinctive bands, and on their chin and throat you can see barbels. This variety differs from their identical mud turtles (Kinosternon Species) because of their smaller plastron (bottom shell) that shows exposed skin seen through the plastron scutes and includes one week hinge. The heads of the Loggerhead Musk Turtles (Kinosternon minor) are far bigger, but the stripes are missing. The tails of the males are thicker when compared to that of the females. In addition, the tail end of the male is in the spine and the opening of the anal elongates to the border and protrudes beyond the carapace.

The turtles belonging to the group Kinosternidae including the mind turtle of the sternotherus genus, is commonly named “musk turtle”. You can see all the five varieties/sub varieties in Northern America. These are the flattened musk S. depressus, stripenecked musk S.minor peltifer, common or stinkpot musk. S. odoratus, the razorback musk. Of these, you can rarely see the stripe necked and flattened ones in captivity. Thus, this article takes into consideration the stinkpot, razorbacks and loggerheads. Among these, the stinkpots and razorbacks are popular in the pet trade.

You can see the central/dorsal keel only in the razorbacks and loggerheads. All the three varieties of turtles have oval-shaped carapaces. The carapace of the razorbacks extends to a length of 16 cm (6 in) and the carapace of the stinkpots and loggerheads are smaller and remain at about 13.5cm (6 in). The stinkpots are not attractive, having green/brown carapaces. The loggerheads and razorbacks posses sandy to cream-colored carapaces marked with streaks and blotched black spots.

In various water bodies all over the east of the US, one comes across the common musk turtles. You can often see them in slow-moving shallow water bodies where the bed contains soft organic materials.

On account of their cute, intelligent and robust outlook, the mud and musk turtles, make ideal indoor pets. Most of the normal Mud Musk turtles (stinkpots) have a stunted growth of 4 inches. The varieties in the central part of America grow up to 6 – 7 inches and the extremely aggressive giant musk turtle (Staurotypus triporcatus) acquires a length of 15”.

The hatchlings of the musk turtle are no longer than your thumbnail. In spite of their puny size, they are fully active and on the move, on condition that you meet their fundamental needs. Thus, it is easy to breed these musk turtles . Many call them “bottom Walkers’ because they love walking on the bed of their terrarium, to explore the food that settles under water.

Place a spotlight of a low-wattage bulb (40 or 60 watts above the basking spot that they can approach. When it is very hot in the afternoon, maintain the temperature to 85°F (29°C)

Air temperature at an average of mid 80F Basking temp. Low 90 F and high 80 F (keep the platform for basking big enough to have a range of temperatures.Water temp. At an average of 70 F for adults and for hatchlings, almost 80 F

Musk turtles breed in the fall and during spring. They mate inside water, and the males, to confirm the female’s reciprocity, bite them prior to mounting on them. Females often lay two clutches consisting of 1 – 9 eggs each in loamy soil and below the debris.

Musk and mud turtles diet consist of the same diet of the commercial aquatic turtles with the exception that you need to add some invertebrates and small fishes to its diet. Their favorites are guppies, earthworm, snails, red worms, minnows, (shiners)

The musk turtles are definitely one among the best, they are robust and you can easily manage them. The hatch-lings are very delicate, as such you would do well to go in for elder juvenile (SCL minimum 1”).