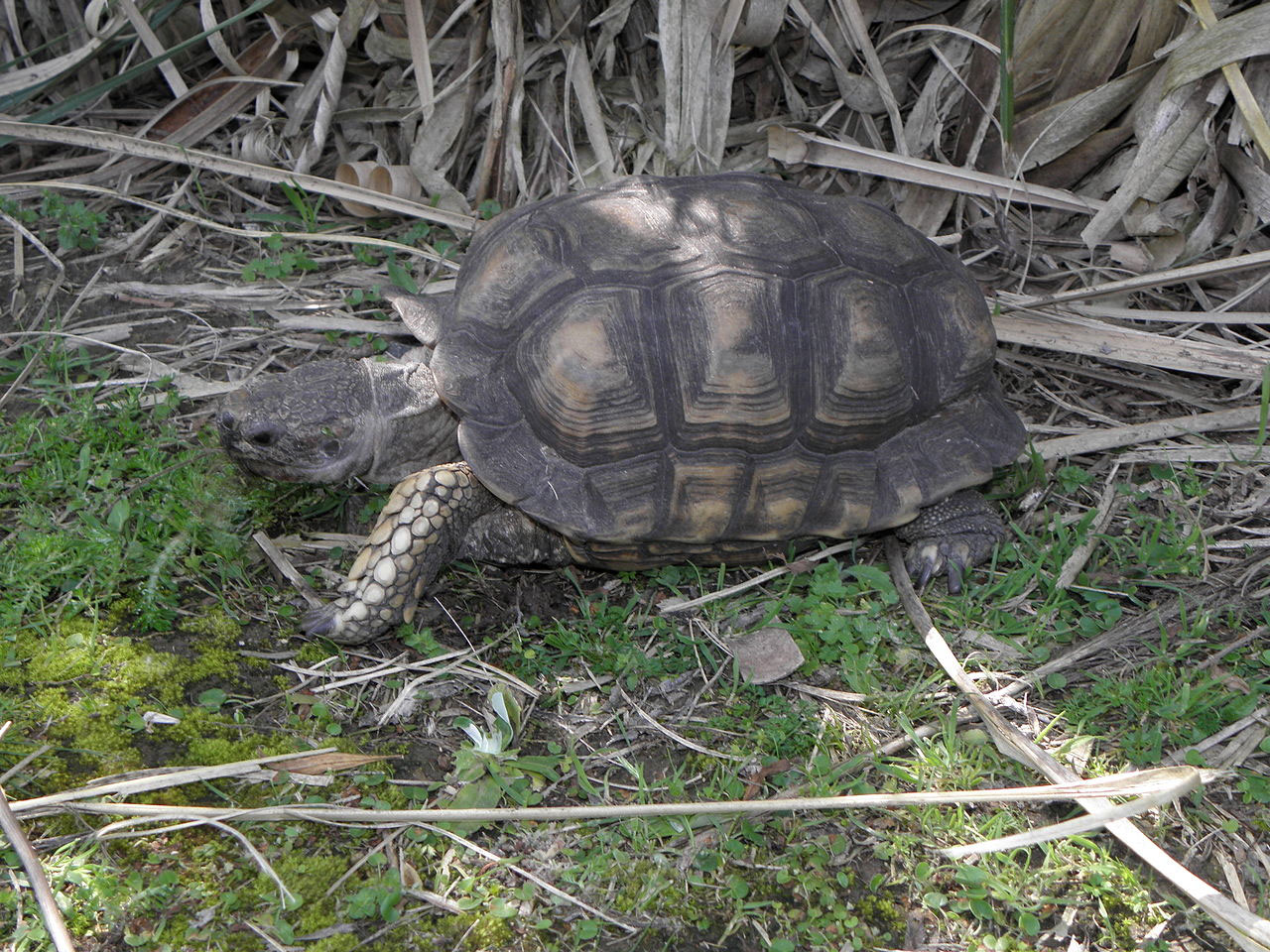 Chaco Tortoises or the tortoise Chelonoidis Chilensis  belong to the family Testudinidae.  The tortoise derives its name from the Chaco regions in Argentina and Paraguay, which they inhabit.  Its Latin name (chilensis) is highly misleading; sice the tortoise does not belong to Chile.  There are no sub-species.

Chaco tortoises are native to Argentina and Paraguay.   They range from the border of Bolivia  to western Paraguay  and northwestern Argentina. The carapace or the upper shell is oval shaped.  The color of the carapace ranges from yellowish brown or dark brown and black growth around a tan center on each scute.  The shell’s rim appears slightly serrated with a pigment wedge at each scute edge.  The plastron is uniform, yellowish –brown. They may have dark triangular wedges along the seams of the scutes.  The colors of the head, tail and limbs are grayish to yellowish brown.  The front of their fore- limb is covered by big, angular scales.  There are many enlarged tubercles on each thigh.

During spring, when they are most active in the mornings, the Argentine tortoise feeds mainly on plants belonging to the Plantogo genus.  In summer, they feed on grass, succulents and fruits of evergreen shrubs.

In the beginning of the spring season in northern Patagonia, we can observe the Chaco tortoises digging short burrows of 50 to 60 centimeters in the sandy soil.  They take refuge at night in these burrows.  They also seek sanctuary in these burrows from the heat of the midday sun. They also construct dens.  These dens are rather deep (around 2 meters).  They dig these dens in hard soil.  They use these dens for several seasons.  In the extreme southern part of their range, these species hibernate for long spells (as long as 5 months) in their burrows or dens.

The mating season is from November to December. Nesting extends from January to March.  During the mating season,  the males become highly territorial and aggressive.  They bite the enemies hard on the forelimbs, often drawing blood.  They may lay up to three clutches of eggs.  Each clutch will have one to seven eggs.  The eggs hatch after 12 to 16 months.  They reach sexual maturity at around 12 years.

People collect Chaco Tortoises from the wild and exploit them for pet trade.  Sometimes they hunt them down for food.  They used to capture juveniles and sell them as pets in the 1950s.  The international demand for Chaco tortoises increased in the 1980s as trade in other tortoise species was banned progressively.  In spite of the protection offered by the national and provincial laws, an annual collection of these tortoises in Argentina alone is about 20,000 to 50,000 for the domestic pet trade alone.  The other threats that these tortoises face include free ranging cattle who compete for food and trample down vegetation as well as the tortoise burrows.  Local burning practices also affect tortoise populations adversely, often injuring and killing them,  and also by reducing the diversity of the plant foods available to them.  Moreover, the Chaco tortoises, like many other tortoise species have late maturity onset and low reproductive rate, making the recovery of the diminished populations, quite a slow process.

Chaco tortoises are classified as vulnerable in the IUCN red list of 2006.  They are also listed in CITES’ Appendix II You can house the Chaco Tortoise indoors  since they are a comparatively smaller tortoise species.

The enclosure for an adult tortoise has to be at least 4 feet x 4feet. You can house hatchlings in a table that measures 3 feet by 2 feet.

Outdoor housing is ideal during warm weather.  You should have enclosures that are predator-proof.  You should put screen lids to prevent animals and birds from snatching the smaller tortoises.  Chaco Tortoises are very adept at digging.  You have to bury hardware, clothes at least half a feet into the ground to prevent their escape.  They dig shallow burrows in summer and deeper ones in winter.

Chaco Tortoises do not react well to extreme humidity.  A substrate that will not retain humidity is a must. Gras-shay is a common substrate. You must take care to remove moist hay to prevent molding.  The other substances that you can use as substrates are  Cyprus mulch, soil and bark.  Just make sure that the humidity level is low.

A water dish that is shallow enough and misting once a day will generate adequate humidity. Make sure that the humidity in the enclosure is not excessive

12 to 14 hours of lighting is necessary for the Chaco tortoise.  The use of UV lighting enables the synthesis of  calcium from the diet.  You must use a fluorescent (full spectrum) light that gives out UVB. You can use the Zoo-Med Powersun or the T-Rex active UV heat as good options. UVB tube is definitely cheaper, but you have to replace them often.  The tubes may work for years.

A Diet with variety is ideal for a robust Chaco tortoise.  You can consider a diet of  75% grasses and greens, 18% vegetables and the rest, fruits.