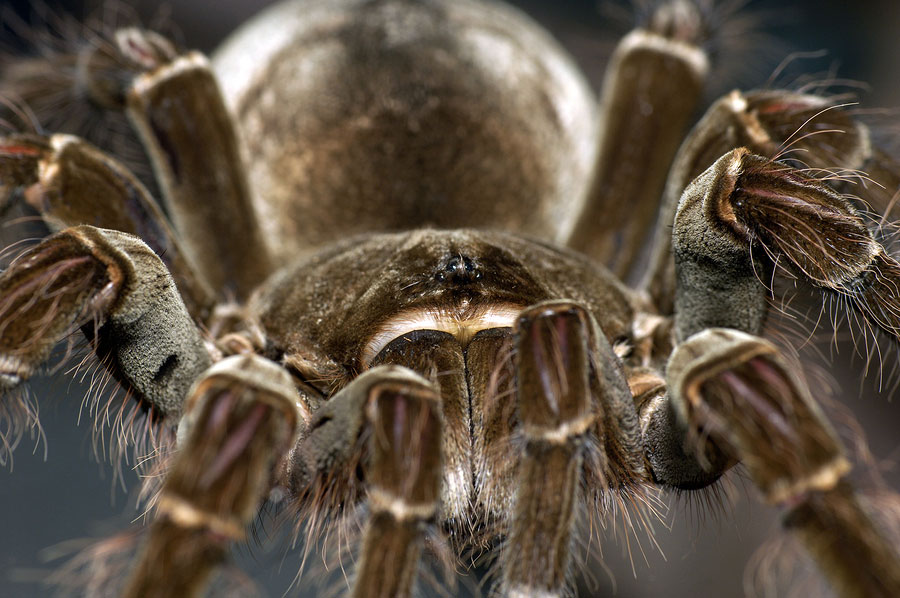 Largest Among the Species of Spiders in the World

The Goliath tarantula is one among their species. The expert says that this bird eating variety is the second largest spider on earth. It derived its name, the Goliath bird-eating spider, from an eighteenth century copper engraving that showed one eating a hummingbird. However, that is rather incorrect, as mostly they do not kill birds for their food genus.

The Northern part of South America is home to Theraphosa blondi. The wild Goliath Tarantula variety lives in deep burrows, generally found in marshy damp areas. Tarantulas characteristically live in deep burrows. They may make their own hideaway or may use those made and deserted by other creatures. The feminine gender mostly lives in its burrow lined with silk. These are nighttime spiders. They do not move far away from their hideaway, not beyond a couple of feet, and they continue to rest in their hideaway throughout the day. The leg span of this hairy variety is twelve inches, almost the size of a small pizza and may weigh up to 2.5 ounces. Their bodies are of light and dark brown colors.  Quite like most varieties of spiders, they have eight legs with seven segments each, and do not have antennae. The color is light to dark brown, while the legs have pale markings. Hair covers the body, abdomen and legs of these bird eaters.

The females attain maturity in three to four years. Their average lifespan varies from fifteen to twenty-five years. It is common for females to eat their mates. Males do not survive for long after attaining maturity. Their lifespan is rather small, from 3 to 6 years. The female lays nearly fifty eggs in a silky smooth egg sack having a diameter of just about an inch. The eggs are stored in her burrow, which she guards for six to seven weeks, during which she takes the sack along, when it moves out of the burrow. Having emerged from the eggs, the young ones keep living in their nest. They move out of there only after their first molt. In fact, there are particular varieties of tarantula that prey on rodents like rats and cockroaches and snakes and the Goliath with its build and size is renowned among them.

Is the Goliath a Good Pet?

Some people do not consider the Goliath Tarantula for a pet because the species are aggressive. The Goliath tarantulas, further intimidate predators by making a hissing sound by rubbing together the bristles on their legs. They sometimes raise themselves on their hind legs in a ready-to-attack position. They have two fangs with poison glands, and though their toxicity levels in humans are bearable, severe pain, nausea and sweating, are some of the side effects of the bite. Smaller victims are not as lucky as the poison paralyzes them by acting on the nervous system. The Goliath tarantula defends itself by using its legs to flick the bristly hairs on its abdomen, causing irritation to the lungs and the skin causing swelling for a few hours. Take care that the minute barbed bristles do not enter your mouth or eyes, when the results can turn more serious.