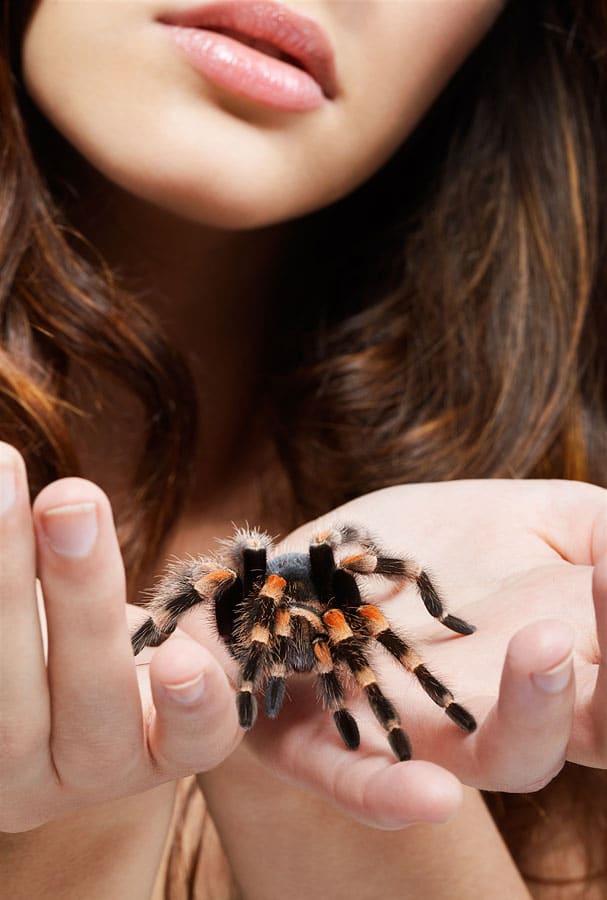 Spiders are exciting creatures belonging to the family of arachnids. They are quiet and low on maintenance. However, like other intrusive and noisy pets like dogs or cats that warrant much more attention, buying a pet spider and keeping it as a pet, also involves a great responsibility.

A first time owner of a spider as a pet should take extreme care on his selection of the pet and ensure that they are neither very fragile nor unpredictable like the tarantulas, namely the Chilean Rose, the red-kneed Mexican variety or the Costa Rican Zebra. Though their venom is neither fatal nor harmful, they pack a punch like a bee sting that may result in considerable pain. The other inconvenient aspect is the hairs on the stomach that they eject like missiles causing a great amount of irritation, especially if they happen to get into your eyes. Before importing any variety of pet spider or more specifically, tarantula, you should make sure that you have checked the local government policies on import of such animals in the state.

One thing anyhow is clear and that is, spider keeping is not for the weak hearted, and if fear is not an object of contention, you can consider some of the following popular spiders for pets.

Grass Spiders – These are extremely fast arachnids that you see moving in the grass. They are as breathtaking in the grass as in the cage. These are ideal pet spiders for novices and you can enjoy these eight legged and eight eyed spiders building wonderful webs with tunnel like entrances even when they are in captivity.

Fishing Spiders – These spiders glide efficiently and fast on the water surfaces to catch their prey. You can go for these spiders as pets and enjoy their antics in the water.

Moving on to other spiders, some of the best of them as pets will include tarantulas. With over 900 species of tarantula identified, you may find it difficult to select one, but going by reputation and reviews, the Red-Kneed Mexican tarantula and the Chilean Rose tarantula are all-time favorites and good beginner tarantulas.

Mexican Red-Kneed (Brachypelma Smithi)Tarantula – The Red-kneed Mexican tarantula is terrestrial and coveted by many hobbyists. This animal can reach an adult size of 6 inches or over and is mostly slow and docile, making for an excellent species for a pet tarantula. However, they sometimes become aggressive and release their urticating abdominal hairs to cause severe discomfort to your body and eyes. They have very specific humidity requirements.

Chilean Rose (Grammostola Rosea) Tarantula – The Chilean Rose Tarantula is really the ideal pet among their species. A large number of spider keepers acclaim that they are the most docile spiders and a pleasure to work with. They catch them in the wild in Chile and export to the US. Another great advantage of this Chilean rose is its least venomous bite among tarantulas, which is a factor enhancing their popularity as a pet. The female, they say, live up to twenty years and they are fascinating pets, both from the point of view of their large size, beautiful large hairs and their docility.

Spider keeping is a hobby that is growing in popularity for several reasons. For some people, buying a pet spider, and keeping a rare spider at that, is a matter of status. Others like to face the challenge of keeping a tarantula as a pet. With the growing demand for spiders and tarantulas, you can see a great proliferation of several brick and mortar and online pet shops specializing in spiders, especially tarantulas.

Where Do You Buy Pet Spiders/Tarantulas?

Many pet stores and reptile shows offer a diverse variety of spiders for sale, including the tarantulas. You can also find them online and through mail-order breeders and pet dealers. You can also consider getting your spider pets from hobbyists directly, if they have the wherewithal for packing and exporting the arachnid without any damage to it in transit. If you visit a pet store and they do not have a spider or tarantula that you want, they can order one especially for you.