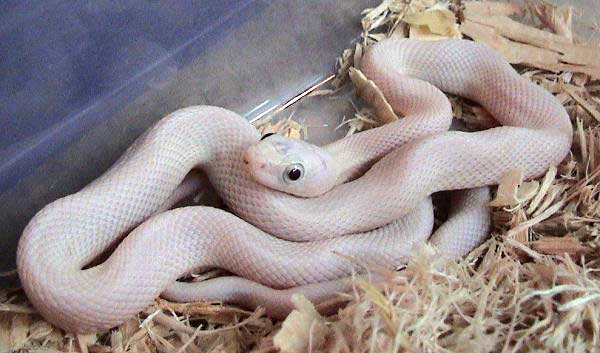 The Texas Rat Snake,  biologically Elaphe Obsoleta Lindheimeri,  is a subordinate variety of rat snakes, a Colubrid that is not poisonous. We see them in The United States, mainly around  Texas state, but their varieties you can find in Oklahoma, Louisiana and Arkansas. It gets along with the other subordinate varieties of Elaphe obsoleta, It is not possible to demarcate a perfect boundary of their range.

The Texas Rat snake is a sufficiently big one that grows to a length of over 6 ft. Within their range they differ in color and design to a great extent. But characteristically, they are tan or yellow in color. From the head up to the tail the color is olive-green to brown, with uneven patches. Typical samples of them from the southern parts have yellow color more prominent. But the snakes hailing from the northern regions appear darker. The only method of recognizing the rat snake from their breed is their exceptionally  gray solid head. There are a few with orange or red speckles. Their belly is colored white or full gray. Their ordinary colors vary from deep orange, albino and hypomelanistic (without dark pigment). The ones you often see in the pet trade and those among captive breeders, show leucism (reduced pigmentation). The Texas Rat Snakes have an insatiable liking for food; they eat a great number of birds and rodents, and they also consume frogs and lizards by making them to surrender by squeezing them. They are in general found all over, in grasslands, swamps, forests and also in urban areas. The rat snakes are expert climbers, capable of climbing high enough to reach bird nests very easily. Very often, you can find them on farms, where they eat tender chickens as well as their eggs. As such, people sometimes wrongly call them chicken snakes. People know their approach, if you attempt to touch it, it will bite,  though  it is not harmful.

The Texas rat snake is an agile climber. Infrequently we hear that Texas rat snakes ascend buildings through the sides of brick walls. They are many a time seen hiding in the attics of buildings looking for  rodents.

The usual enclosures for snakes are aquariums; even then,  there are so many other options that are simpler to maintain and with better lodging comforts available in the commercial market, Irrespective of the type of the enclosure, the space is important for the snake to have its natural facilities. For the maintenance of a juvenile, a space of one foot square is sufficient, but for a grown up Texas rat snake, you need a minimum of 4 -8 sq. ft.

The diet necessary for a Texas Rat Snake to flourish is just one standard size rodent a week. It will struggle if you attempt to feed it with something that is more or less the same size as that of the diameter of its middle portion of the body. Certain keepers choose to feed their young pets as often as 2 to 3 times a week and then gradually reduce the amount as they grow. This practice is fine, but it has nothing to do with its health.

A thumb rule that is generally followed is to feed food items that are smaller than the biggest diameter of any part of the snake’s body. Feed any variety of snake small mice and adult mice or rats depending on the snake size, every 5-7 days. Bear in mind that you never feed your snake in excess, since obesity and other health problems will occur gradually. The response and temperament you experience when handling a grown up rat snake differs. However, most of them turn passive and inspiring and never bite when handled, whereas, other snakes (mostly those caught in the wild), turn irritable, anxious and we cannot predict their adult behavior. Even then bear in mind that a rat that is passive may react and bite your pet as a measure of defense,