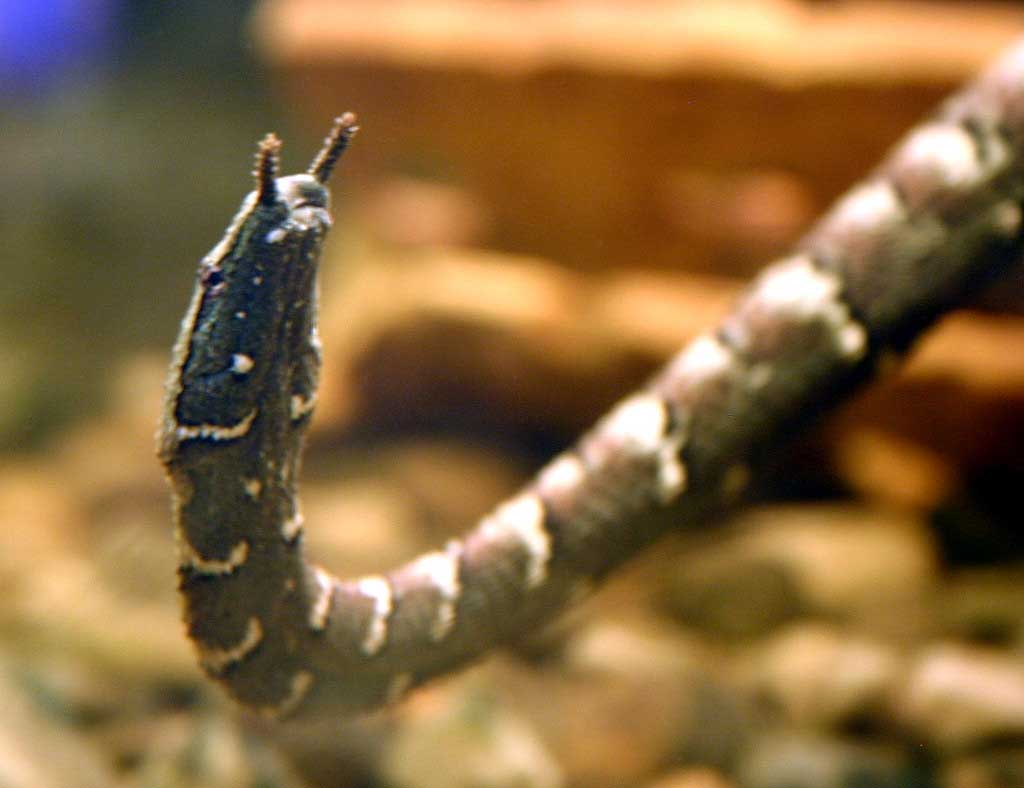 The Tentacled snake belongs  to the species Erpeton Tentaculatum. These  are  aquatic snakes.  They are the only species  of their genus.  These aquatic  snakes  are rear-fanged.  Tentacled snakes are natives of Southeast Asia. The distinctive feature of the snakes is the tentacles on the snout. Research is in progress about the methods the snake uses to catch fish.

Tentacled snakes are sure to figure high among any top list of unusual snakes. They possess prehensile, long tails.  Their scales are heavily keeled.  The Tentacles, which give them their name, are mysterious astral projections. The life style is aquatic. They seem to have an inclination for Algae growth that aids in camouflage. Among odd ball snakes, this species takes the cake.

These snakes are relatively small. They average 20  to 23 inches (50-90 cms) in length. They come in two (color) phases. Both the phases range from dark gray, light tan or brown,  with blotches or stripes. These snakes spend their complete life in murky water. They possess two tentacles right in front of the head. The function of the tentacles, is mechanosensory (using to sense the prey). Even though they are venomous, these snakes are not considered dangerous to human beings. The partially grooved, small fangs are located deep inside the mouth, at the rear. The species are native to southeast Asia. You can find them in Cambodia, Thailand and Vietnam. These snakes seem to have an affinity for murky water, in which they spend their entire lives. You can find them where the water is murky enough like lakes, sluggish streams, rice fields, ponds. You can also find them in brackish, sea or fresh water. The Tonle sap lake in Cambodia is a typical habitat of the snake. The water is silty,  with a large population of fish. The snake’s preference is for stagnant or sluggish water with vegetation (emergent or sub-emergent).

These snakes seem to spend their entire life in water. They can stay submerged in water  up to thirty minutes without coming up for air. Their movement in land is slow and awkward. In dry spells, the snakes opt to burrow themselves in the mud.

These snakes are live bearers meaning hat they give birth to young ones. Captive breeding is not unusual.

Tentacled snake care advises that,  when you plan an enclosure for your tentacled snake, imagine that they are like fish and not reptiles. They are so completely aquatic that they come to the surface of the water only to breathe. Aquariums are certainly the best choice since they hold water and provide the best opportunities for viewing.

A 20 gallon aquarium will suffice for a single tentacled snake. They do well in Groups. You can house up to four snakes in a 55 Gallon aquarium. You can comfortably house seven of the species in a 125 gallon aquarium. The height of the aquarium is not as important as the surface area, but the aquarium must be tall enough to ensure optimum water depth and enough clearance between the aquarium top and the water surface. Remember, these snakes are good escape artists. You can provide Haul-out areas (platforms) for them, though it is not imperative. The water depth can vary between  six and twelve inches. There should be sufficient hiding places for these snakes. Tentacled snakes anchor themselves in water using their prehensile tails. So they need anchoring accessories. Driftwood, logs, stones  and plants (real or artificial) can be used to create their habitat.

Ensure that you completely cover the aquarium with glass or plexiglass. There should be a limited number of ventilation holes on the cover.  You should provide at least  a six inch gap between the water surface and the cover. There should be no gap in-between that could aid the snake to escape. You have to take ample precautions against their escape, because, a few hours on dry land (without water) could cause serious external and internal injuries to the snake.

You must strictly monitor the quality of water in the aquarium, especially the pH range. The ideal pH range would be between5 to 6.6. To keep the pH level in the acidic range, you can make use of aquarium buffers or Blackwater conditioner. Alkaline pH will create skin problems  for these snakes.

Tentacled snakes are good eaters, who love to eat often. In captivity, they feed only on live fish. In the wild, they may also feed on amphibian larvae. Fish are their staple food and you can feed them quite a variety of fish that include rosy barbs, betas, cichlids, platies,  Gouramis (a fish species),  guppies and comets (feeder goldfish). Contrary to certain reports, a regular diet of feeder goldfish poses no health problems.

The tentacled snake is rear-fanged like all aquatic snakes. They do have mild venom. The venom appears to be fish-specific and the venom delivery system is at the best, crude. They are naturally docile. You can say that they pose no danger to the keepers just like hog-nose (western) snakes. If you are allergic to their venom, it could create problems for you. It would be better to be cautious when handling tentacled snakes.