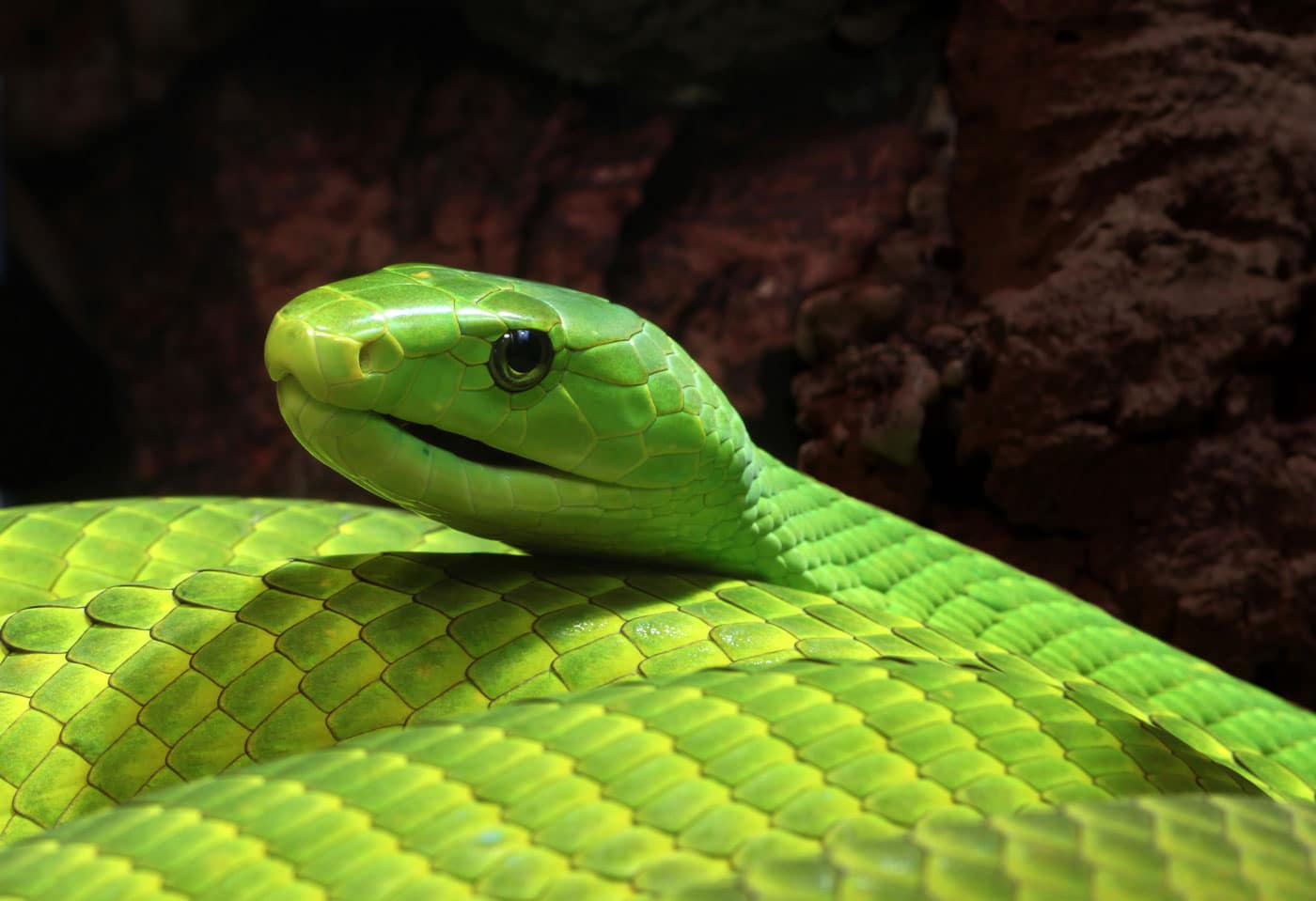 The Eastern Green Mamba, biologically known as Dendroaspis angusticeps, is otherwise called the Common Mamba, Green Mamba, East African Green mamba or The White Mouthed Mamba. This snake that lives in trees, is a big snake and a tremendously poisonous variety that belongs to the mamba genera Dendroaspis. It was a surgeon hailing from Scotland who portrayed this species in the year 1849. The Southern parts of East Africa along the coasts are the regions that these snakes inhabit.

The Eastern Green Mamba is a very poisonous snake, similar to the other varieties of mamba. It is competent of  killing a person with just one bite. The big Eastern Green Mamba is a solid and trim bodied snake; its tail is a bit long and tapering towards the end. The full length of a fully developed male is almost 1.6 m (5.9 ft),  while that of a female is 2 m (6.6 ft). This snake  occasionally reaches a length of 2.5 m (8.2 ft). Generally the full length is 4 to 4.3 times the tail’s length. The Eastern Green Mamba has a thin, lengthened head, in the shape of a coffin. From the neck, the canthus (or the canthus rostralis, represents the angle in between the side of the head between the eye and the snout  and the flat crown of the head),  and is clearly visible. If this animal is terrorized or aggravated in any way, it can flatten its neck without any formation of a hood. The front fangs of this snake are comparatively long,  situated in the front of the maxillary bone right in front of the maxilla and can rotate around its axis with the help of the pre-frontal bone, whereby they have sufficient control of the movement of their fangs, quite different from the other varieties. There are no hard teeth in the maxillary bone. Even then, on the frontal portion of the lower jaw, there are two long recurved hard teeth in the form of fangs, behind which there is a clear space at intervals. In the front of the jaw, there are a number of tiny teeth. These green snakes have circular eyes with round shaped pupils.

Among the mambas, the Eastern Green Mambas are the smallest. The standard length of a green Mamba is 1.8 m, and the biggest length is till 3.7 m. It has a slim body with brilliant green color, having scales distributed like the paved stones on a dark portion of the skin. The belly scales are lighter than those of the dorsal scales.

Behavior the Eastern Green Mamba snake has a pleasing look when kept as a pet. It is because of their striking colors that they are preferred as a trendy pet. Most of them are tranquil and quiet, if you do not trouble them. One cannot predict their real behavior, and so, always take precautions and keep a watchful eye. Some of these snakes can become very sociable for a long time and can even crawl on you. They tend to behave well and are agile, if the enclosure you provide to them is sufficiently large. These Eastern Green Mambas are curious creatures and react to new objects in the cage or some movement with inquisitiveness. Other than the mating period, you can rear them in groups. Still, during the mating period, it is possible for the males to fight, causing anxiety to the females. There are different methods of managing these snakes. You can attempt to handle your Eastern occasionally, and when you do so, make use of a tailing and hook method. This method of handling is acceptable to all reptiles, and it is successful. In case these reptiles are not very sociable,  then  make use of the trap box with a lock which does not develop stress in them. Using tongs is advisable while handling them. When you handle them by their tail, it is likely that they become tense. Normally, you do not see the Eastern Mamba back back bite you if you  handle them by their tail, but they attempt to move away.

These Eastern Green mambas are native to the coasts of East and South Africa. They are endemic to South Kenya,  all over East Zimbabwe, Mozambique, Malawi, Tanzania and down South Africa,  along the Southern Natal and North Pondoland. It is even seen in Zanzibar.

Mambas prefer to live in solitude. The male Green Mamba Snake locates a  mate by going after a scent. These male green mambas challenge each other by performing a ceremonial dance or by wrestling and competing with each other on the ground, where the stronger one makes the other to surrender. This type of battle lingers for hours. Persuading the female towards sex and mating is done on the trees. The female lays about 10 to 15 eggs. After a period of 3 months or more, the mamba babies hatch;  the hatchlings are almost half  a meter in length. Since these Eastern Green Mambas are large and agile, they require a large terrarium for moving around. You would do well to  accommodate your Eastern Green Mamba in a terrarium of size 220 cm L x100 cm W x 180 cm H. You can embellish  the terrarium with many branches for climbing. Different types of synthetic plants are placed in the enclosure as hideouts for them. The substrate is an assortment of peat, potting soil, coco peat and bark. Place a water tank of capacity 20 litters. You can  heat the top portion of the enclosure with a 150 watt spotlight and a tiny spotlight of 60 watts, almost 100 cm above the floor. The normal temperature is more or less 28oC and humidity 70%. The young ones are laid in boxes made of plastic, spread with newspapers, a small water dish and tiny branches..

These mambas eat mainly  rodents, eggs and even adult birds. There is evidence also of these snakes feeding on bats and they are even known to consume tree-dwelling lizards, but there is no documentary evidence of this.

In nature, they feed on frogs, birds and tree-dwelling mammals. You can feed your Green mambas with dwarf hamsters hanging in the terrarium from a branch in the tub or living mice to eat. In case you give them rats or chicken,  it is preferable if you kill them before you feed your pet snakes. You can food by holding it with long  tweezers,  and they readily receive it. Feed your Eastern Green Mamba adults weekly, twice with tiny prey articles or perhaps alternatively in two weeks with chicks or rats. You can feed the juveniles 2 times in a week.

Your movement must be conscious and slow when handling them by their tail with a hook, Do not make quick movements either because of your nervousness or thrill as they may respond negatively to quick movements. Better make use of a trap box to hold them. Be cautious when you use bins that opens at the top, there is a possibility of the specimen striking, in case it becomes surprised of stressed.