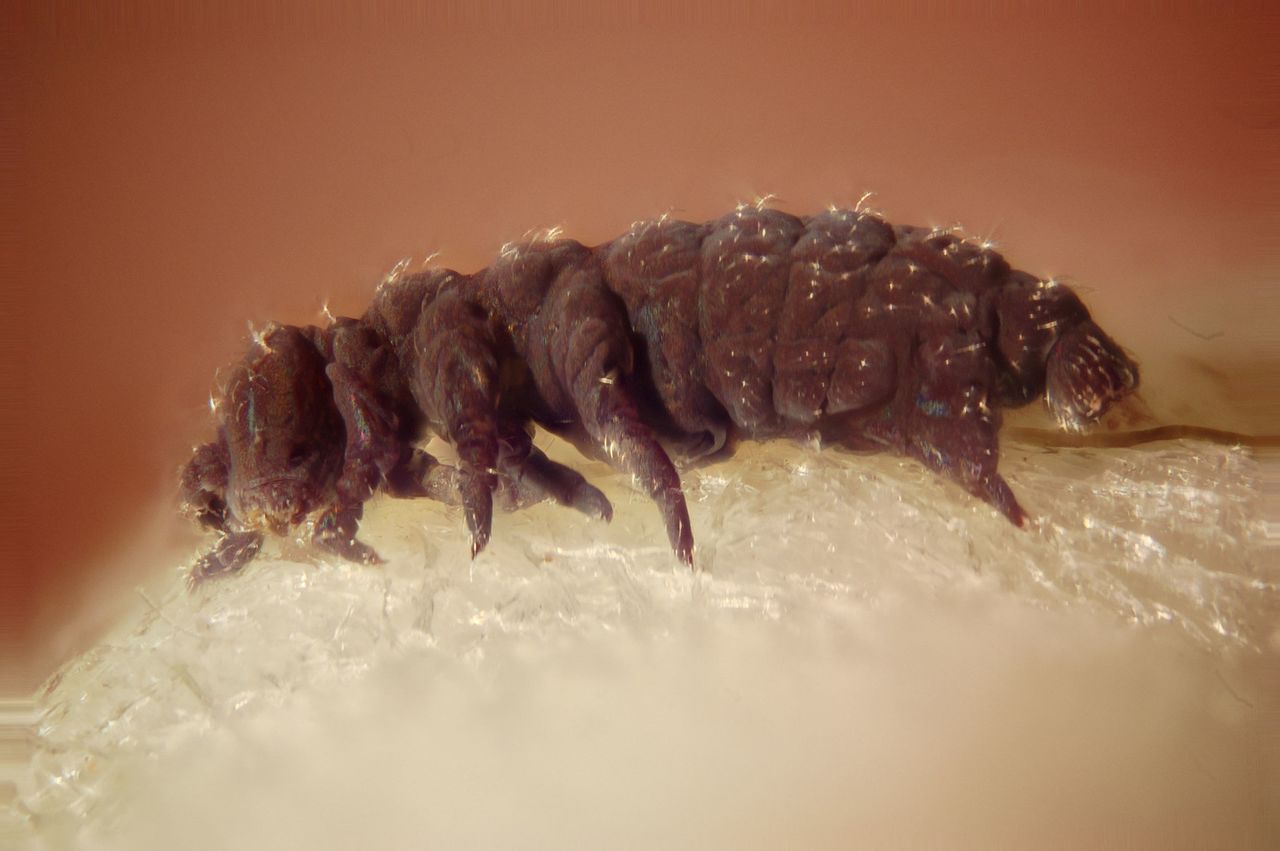 Tardigrades inhabit places where there is water. The other names by which they are called are moss piglets or water bears. These microscopic animals that are made of segments possess 8 legs. It was in the year 1773, that Mr. Johann August Ephraim Goeze discovered this animal. Three years later, an Italian biologist by the name Lazzaro Spallanzani gave it the name Tardigrades, which means “slow stepper”.

This phylum was obtained from the mountain tops, to the depth of the sea, from the tropical regions of the rain forests down to the Antarctic region. Tardigrades are able to live long in the severe environmental conditions. For instance, they are able to survive in temperatures ranging from a little over absolute zero right through temperatures attaining the boiling point of water (100oC), and can tolerate pressures more or less 6 times more than the animals seen in the trenches of the deepest oceans. Such a condition ionizes the radiation at a dose greater than that of the lethal dose a human being, can tolerate  by 100 times.. They are able to survive, in the absence of food and water, for about 10 years, whereby, they dry out to a situation where their water content is 3% or more Just enough  to forage, rehydrate and to reproduce. However, they are not extremophilic (those organisms that flourish in geochemically or physically severe situations, harmful to the majority of the ones that live on earth); this is because they are unable to adjust to severe situations, which means, the more they are brought to the exposure of these severe surroundings, there are more chances of their dying, while, real extremophiles flourish in geochemically of physically severe situations, harmful to the majority of the many organisms.

Tardigrades belong to the Tardigrada phylum, a sub of the Ecdysozoa superphylum. It belongs to the Cambrian era, a prehistoric class of fossils that dates back to 530 millions of years back.

Mosses and lichens are the very suitable places where Tardigrades are found. The alternate surroundings where they are found are beach soil, dunes and freshwater or marine sediments. Here we find them, most of the time (As many as 25,000 animals in a liter of water). In the case of Echiniscoides Wyethi (a new Tardigrade species), they are likely to exist on barnacles. To find these Tardigrades, you can soak a piece of moss in the water. The normal size of a full grown Tardigrade is around 0.5 mm (0.020 in). They have a plump and short structure and 4 pairs of legs; each leg has 4 to 8 claws called “disks”. The first 3 pairs of legs are in a straight line ventro-laterally; these are the chief locomotive means, whereas the 4th pair is aimed at the posterior, at the trunk’s terminating section, its use is mainly for holding on to the substrate.

They earned the name “water bear” from their style of walking, indicative of the bear’s walk. The body length of the biggest adult goes up to 1.5 mm (0.059 in), and that of the smallest less than 0.1 mm. The ones that are just hatched are likely to have a length of 0.05mm.The body structure of the Tardigrade is that of a barrel having 4 pairs of stumpy legs. The length of most of them are 0.3 to 0.5 mm (0.012 to 0.020 in), however, the biggest variety attains lengths of 1.2 mm (0.047 in). The structure of the Tardigrade consists of a head, with 3 sections in the body; each section has a pair of legs and the caudal section, has 4 pairs of legs. The legs are separated and there are 4 to 8 claws on the each foot. The cuticle possesses proteins and chitin periodically molted.

Tardigrades are eutelic, which goes to say that the Tardigrades of the same species that are mature have equal number of cells. In certain varieties, the adults have 40,000 cells, whereas in the rest they are much less.

Haemocoel is contained in the cavity of the body, however, the region of the gonad, is the lone place where a real coelom is seen. There is no particular respiratory system; exchange of gas takes place throughout the body. In certain Tardigrades, there are 3 tubular glands connected to the rectum, supposed to function as excretory organs similar to the arthropod’s Malpighian tubes, even though there is no detailed study of it.

There are stylets in the tubular mouth, which they use for piercing the algae, plant cell or tiny invertebrates which they feed on, by which it discharges the fluid of the body or content of the cell. They open their mouth into a triradiate, this is a powerfully built, sucking pharynx. After the animal molts, it loses its stylets and it secretes a fresh pair from two glands lying on both sides of the mouth. The pharynx is connected to a tiny esophagus and further to the intestine, for almost the length of the body; this is the primary digestive system. The opening of the intestines is through a tiny rectum, through an anus situated at the extreme end of the body. Certain species excrete while molting, discharging their faces at the rear with the discarded cuticle.

The brain comprises of several lobes, typically comprising of 3 clusters of neurons, bilaterally paired. The brain is connected to a big ganglion underneath the esophagus from which runs a cord of double ventral nerve, throughout the body. In every segment of the nerve cord there is a ganglion. Every ganglion has nerve fibers laterally positioned into the limbs. In the majority of the species they have a pair of rhabdomeric (which means their photoreceptors possess a typical structure and makes use of a specific set of biomolecules for signal transduction). A great number of sensory bristles on its body, head and eyes can be seen in the shape of pigment-cup. All the Tardigrades have a buccopharyngeal apparatus (Wiki-Area where the endoderm and the crescentic masses of the ectoderm come into direct contact and both of them form a thin membrane, called the buccopharyngeal membrane). This together with its claws, differentiates one species from the other.

The Tardigrades are widespread in lichens and mosses; they feed on algae, plant cells and tiny invertebrates.

Certain varieties are parthenogenic, even then the females as well as the males are generally present, and each one has one gonad situated on the intestine. In the testis of the male there are 2 ducts, which open via a solitary pore facing the anus. Contrary to this, the female has only one duct that opens either directly into the rectum or right over the anus, this turns into the cloaca.

Fertilization of the Tardigrades takes place externally, they are oviparous. They mate while molting, laying their eggs within the female’s shed cuticle and further they are enclosed with sperm. Some varieties fertilize internally; here they mate prior to when the female’s cuticle is fully shed. In most of the cases, the eggs remain within the shed cuticle for developing; however, in some they are attached to the adjacent substrate.

The eggs get hatched within 14 days and here the hatched ones have all the cells that an adult has.