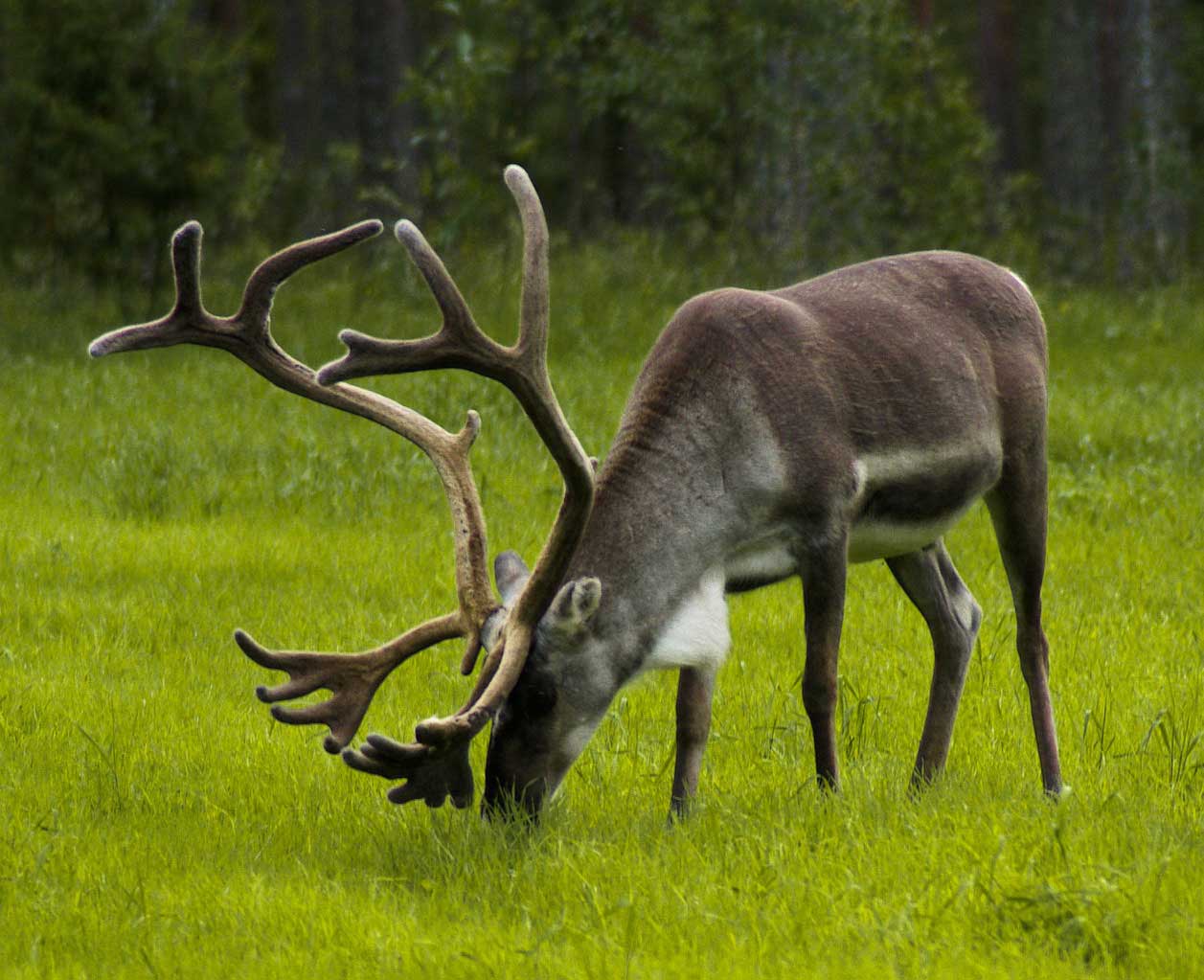 In North America, the Reindeer is also known as Caribou. The scientific name of the Reindeer is Rangifer Tarasndus. They are found in Northern parts of North America and Canada, Alaska and also in Greenland, Europe and Russia.  They have a strong sense of smell, and this smell helps them in finding the lichen under the snow. Reindeer are strong and energy efficient animals. In the wild, they can live up to 15 years. Reindeer are the only type of deer in which both male and female have antlers.

Reindeers are an important animal for the indigenous people of northern Finland, both in their sustenance and culture. In Finland, its husbandry and herding are the occupation of the residents of the area. In the Norway and Russia, hunting of reindeer is strictly controlled.

Reindeers eat definite types of lichen which grow in sub-arctic climates. These plant materials help them to keep their blood warm, so that they can survive in icy winters. They are Herbivores and they like to eat grass, moss and plants. They have brown soft fur on the parts of their back and have white fur on their neck. Excluding their antlers, they are usually 4 to 5 feet tall. And their antlers are 3 feet tall. The ears of reindeers are rounder and short and their tail is furry and short. They are the only mammals in the world which grow sets of antlers yearly. They have the capacity to run 50 miles in one hour. The male reindeer is known as buck and a female is known as doe. And the baby reindeer is known as fawn.

Reindeers migrate to the South during the winter season. And in the summer season, they migrate north. Their trip is a 1200 mile round trip, which is one of the largest migrations in the world. The hooves of reindeer are very useful for digging for food. The outer edges of their hooves are sharp, a feature that helps them to walk on rocks and ice.

Reindeer have a short mating season and they are seasonal breeders. Normally, their breeding season begins in early September and lasts 3 to 4 weeks. Their gestation period is about 210 to 220 days. A female Reindeer usually gives birth to one fawn in a year, but sometimes they bear two. When born, a fawn is 10 to 11 pounds. The milk of reindeer has more fat than cow’s milk.  Summer season is a calorific season for the reindeer bucks. During these months, if they fail to gain enough weight, then they can forget about mating.

In Alaska, starting in the year 1892, the Reindeer is not native. It was brought from Siberia. Reindeer farming provides a new food industry to Native peoples of Alaska. They do not require large areas and many facilities. They require low maintenance and are easy to handle and are relatively a disease free animal. Farm reindeers can produce meat, velvet antler, trophy bulls for hunting preserves and also by-products such as hide, shed antlers and robes. The milk of reindeer is extremely thick and creamy. This milk used is used for making   tea, curd, Cheese, yogurt and cream. In Alaska and Canada, reindeer sausages are produced as a source of food. The people of Alaska eat meat of Reindeer for protein. Reindeer meat balls are eaten by the people of Scandinavia.