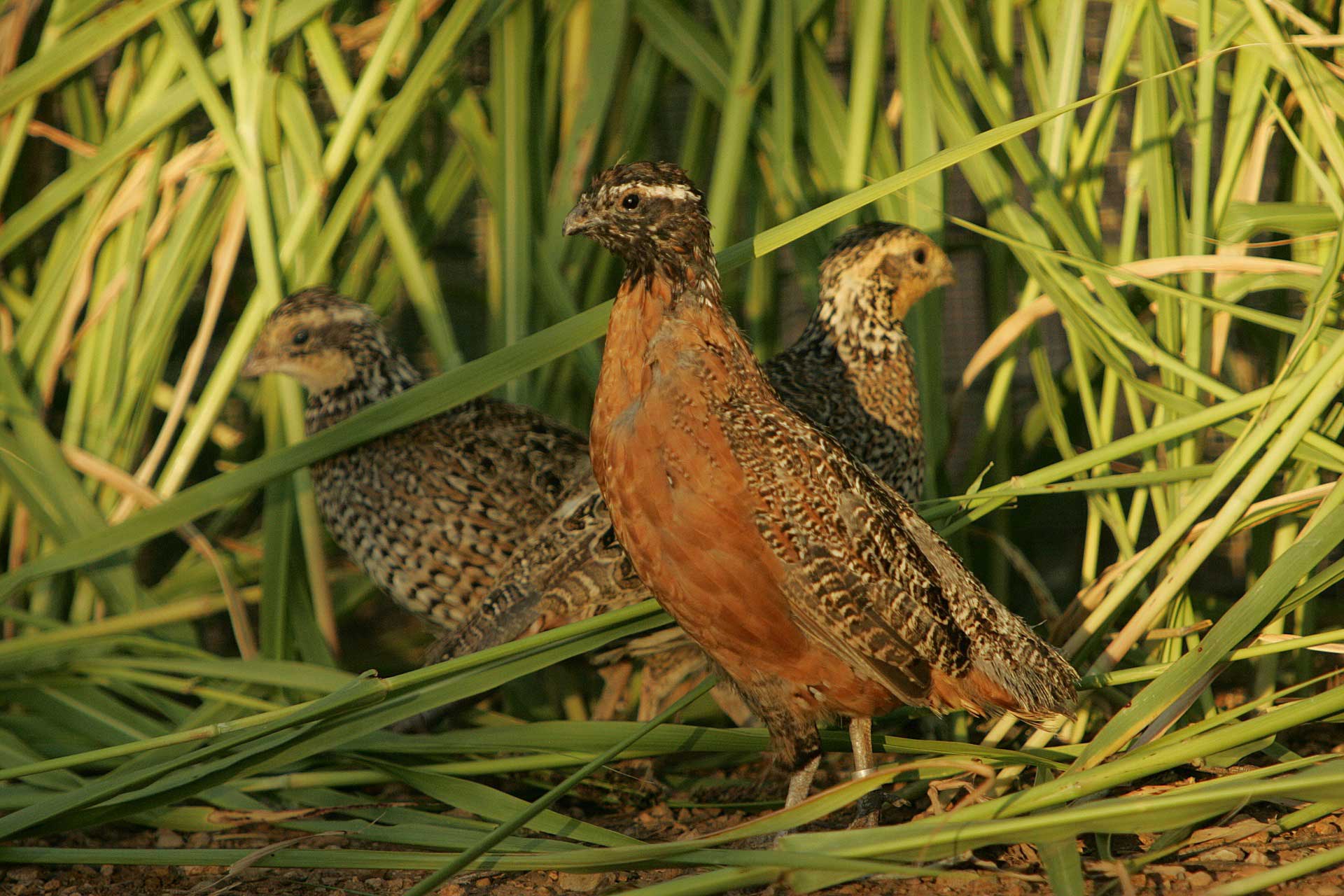 Quail refers to the birds belonging to several genera of the Galliformes order. The Old World Quail species belonged to the Phasianidae family, whereas the New World Quail belonged to the Odontophoridae family. Coturnix Coturnix, also known as the Common Quail is a tiny bird, belonging to the Phasianidae family. It is widely distributed, but is more commonly found in different parts of Europe. It is always confused with the Japanese quail, biologically termed as Coturnix Japonica. Japanese quail is endemic to Asia, and has a very different call than the common Quail.

Quail is a tiny, round bodied bird with brown shaded and streaked skin. This bird has an eye stripe of white color in both the genders, and the male has a specific white chin.  It possesses long wings that are about 110-115 mm in length. The length of this bird is usually seen from 18.0 to 21.9cm, and it weighs around 91 to 131 g. The tail length in males is around 31-38 mm, whereas in females, it is around 36-44 mm.  Some different species have attractive plumage, like the native Quail found in North America and the Gambel or California Quails. The California quail posses a white and brown colored belly that has a scaly appearance. It also exhibits a black colored teardrop-shaped plume on the head.

Quails are terrestrial bird species that mainly feed on insects and seeds found on the ground surface. This bird sits hidden in the crops that make them difficult to notice. They always creep away inside, and seem reluctant to glide away. Its presence can only be realized by the sound made by the male Quail. The sound of the call can be always heard in the morning, evenings or maybe even in the nights. Unlike the regular game birds, these Quails are migratory in nature.

Common Quails are monogamous in nature; hence they bond strongly with their mate. The male Quail is the first to reach the breeding location before the female Quail. The male starts making loud and guttural sounds. The female Quail also responds to the male’s call by making sounds that are referred as “attraction call”. Before making the call, the female Quail chooses a suitable nesting location. The male then displays his breast and throat feathers, and ruffles them while circling around her. The male dances around the female and his wings droop along with uttering sweet and soft notes. It is also said to perform tidbitting. The breeding season of Quail birds in the European region is from May to August. In Africa, the breeding period is from September to March, but in Kenya, the Quails seem to breed during the rainy season that stretches from January to February. The Quail matures sexually within 6 to 8 weeks, and makes a nest in the ground. The female Quail produces around three clutches of eggs in a single season. The eggs of a Quail are pure white in color, and have a length of 2.5 cm or more. The weight of this egg is approximately 8.5 g.  The common Quail species lay around 8 to 13 eggs in a single clutch. The eggs take around 17-20 days to hatch. The offspring grow and become capable to fly within 11 days.

It is said that the meat of Quails can be poisonous, if they have consumed some specific plants, though the names of the plants is still under debate. The one who consumes the poisonous flesh can fall sick with coturnism. This may cause severe muscle soreness and kidney failure.

The Quail bird is migratory in nature.  They are commonly found breeding in Turkey, Europe, China and other countries of Asia. In the winter season, these birds migrate to India, Southeast Asia, China, Sub-Saharan areas of Africa, extreme northwestern African coast, areas between Kenya and the Nile River in Egypt and Angola. Most of them belong to the African race that commonly breeds in Tanzania, Kenya, South Africa, Madagascar and Mozambique.

Quail farming refers to raising Quails for commercial purpose, like the other poultry birds. Quails are famous commercially for their eggs and meat.  It is considered as a very profitable and effortless job. Quails are very easy to maintain, as they are the smallest species present in the group of poultry birds. The idea of raising it as a domestic bird was recommended by a Japanese scientist. Later, Quail farming became very popular in Japan. Many youngsters and job aspiring entrepreneurs are attracted to the Quail farming due to its increasing demand for eggs and meat. It can gain profits similar to that of chicken farming, turkey or other poultry. Quails are very hardy, and so, can tolerate any climatic condition. The growth of Quail and the egg production is a speedy process; leading to more profits in less time. The egg of this bird is of prime importance, as it is considered more nutritious than the other poultry birds. The eggs contain more protein, iron, phosphorus, vitamin A, B2 and B1. Other than being nutritious, the meat and the egg of quails are very tasty. It is considered as a good means to meet the requirement of nutrition and food.  These birds are so social that they can also be raised with other poultry birds. The Quail-meat and eggs are very nutritious as well as very tasty. It is quite popular in many cuisines around the globe.

In ancient times, it was favored by the French people. Now-a-days they use the Japanese quail as the new delicacy. The common Quail recipes are a very important part of Malta’s cuisine, Portuguese cuisine and Polish cuisine.  It is quite popular in India, especially in the Kerala cuisine. The meat of Quail is available with bones, and is mostly cooked along with bones, as its small structure makes it difficult to remove the bones before cooking. Other than that, it is very easily chewable; hence the bones are not inconvenient to eat. The wild Quails have a stronger flavor than the domestic Quail meat.  The meat of this bird consists of very less fat, hence if not cooked properly; the meat can dry out quickly. According to the University of Kentucky Extension Service, the meat of a Quail should be braised, but many people also boil, roast and fry this meat. With any method, Quail recipes are tasty due to the good quality and low fat meat.  Whichever method is adopted to prepare, you should make sure that the Quail should be cooked until the internal temperature of the meat reaches 165 Fahrenheit. This will help to reduce the risk of illness that can be caused by consuming the Quail meat.