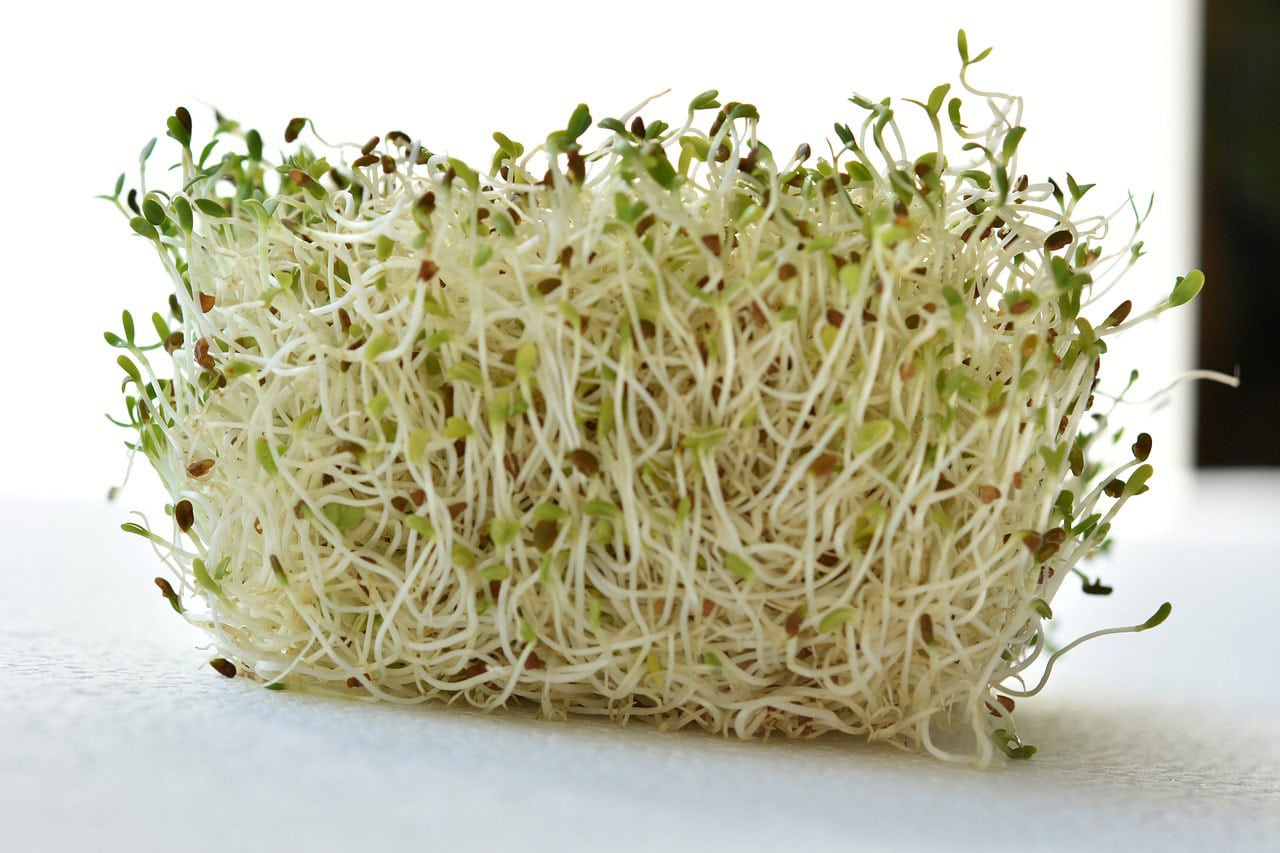 Alfalfa or Medicago Sativa is otherwise named Lucerne. This belongs to the pea family called Fabaceae and is a plant that flowers. In several countries all over the world, it is considered as an essential forage crop. The name alfalfa which is Spanish-Arabic is used to a great extent, especially in Australia and North America. However, it is known by another common name Lucerne in the UK, New Zealand and South Africa. In the external structure, it resembles Clover, having bunches of tiny purple colored flowers in a spiral configuration with 2 to 3 turns and possessing 10 to 20 seeds. Alfalfa is a perpetual cool-seasonal herb, grown normally as food for the livestock or as a soil conditioner or a cover crop. The nutritive value of Alfalfa is very high and it is a source where nitrogen is obtained in nature. Alfalfa is an ideal herb for enriching the soil and controlling erosion. The extensive root system of Alfalfa gives nourishment to the soil as well as the plant. This plant has been cultivated since the ancient times. Growing it is not difficult. You need more knowledge from books on growing Alfalfa. .

It is believed that Alfalfas origin is from South-Central Asia, and initially grown in Persia. In the 490 BC, this plant was made known in Greece at the time of Persian Invasion; it was cultivated as fodder for the horses and cattle of the Army. Further, it was brought to Italy in the beginning of AD

Alfalfa is a perpetual fodder of the pea family, its life is normally 4 to 8 years. However, according to the type of climate, it survives for even 20 years. Alfalfa grows to heights of 1 meter (3 ft.), Its root grows deep and even extends to a depth of 15 m (49 ft.) as such it is very resilient, particularly during droughts. It possesses a Tetraploid genome (The cell nucleus containing four times chromosomes of the haploid variety)The seeds of this crop Alfalfa are tiny and the seedlings grow gradually, however, in the course of several months, when well set, it develops a strong crown above the root system, which possesses several shoot-buds. This makes the Alfa to grow repeatedly over and over again following harvesting or graining.Autotoxicity is exhibited by this plant; this shows that Alfalfa is difficult to grow in the existing stands of Alfalfa. On account of this, you would do well to rotate Alfalfa along with other varieties, (for instance, wheat or corn) prior to re-seeding.

Alfalfa is indigenous to warm climates. To an extent, right from the beginning of the Roman and Greeks age, this was grown as fodder for livestock. All over the world Alfalfa is cultivated as fodder for the cattle, and very often grown to derive hay; however, it is otherwise used as silage, fed as green chops or grazed. Among the usual hay crops intended for feeding, alfalfa is the highest value crop, but not always used as pasture. If it is cultivated in soil that suits it, m Alfalfa yields the most fodder. However the main advantage is the return of higher yield for each hectare and very good nutritional value.

Alfalfa is cultivated and propagated without any difficulty; it suits most of the gardens and goes along with most of the cultivating situations. Besides, it is highly resistant to drought, since it prefers its feet in the dry condition. Excess of moisture creates molds to grow. While cultivating Alfalfa, select a location whit bright sunlight and where the soil is properly drained having a pH value of 6.9 and 7.5. Before planting your Alfalfa, work out the soil, clean it and discard the debris from it. You get pure Alfalfa seeds from most of the supply stores.

If you are residing in a place where the climate is cool, then spring is the right time for you to plant Alfalfa, whereas in regions where the climate is milder, fall is ideal. Alfalfas roots grow fast; therefore it never needs deep planting, just half an inch depth is sufficient. It is enough if you scatter the seeds and cover the soil mildly with dirt. One fourth pound of seeds is enough for 25 square feet of soil. Plant them in rows of 18 to 24 in. The seeds sprout in a gap of 7 to 10 days. When these seedlings have grown to a height of 6 to 12 inches, it is better for you to thin them to get rid of congestion.

In case alfalfa plants for livestock, before blossoming, you need to harvest and cure them (this is called the early-stage of bloom). Animals find it difficult to digest matured plants. We get the maximum nutritive value when harvested at this early-bloom stage as is seen in the leaves of the plants. If rain is forthcoming, avoid cutting alfalfa, in order to safeguard the crop from damage. There are issues of mold formation in rainy weather.

The growing season of alfalfa is prolonged, as such when compared to other crops; the water consumption of alfalfa increases every year. While controlling irrigation, it is mandatory to take into consideration the characteristics of the crops, like the requirement of water (this includes taking into account the season, daily and yearly consumption of water), development of the root system, characteristics of the soil and every significant stage of its growth, besides the accessibility of water and the system of irrigation.

Alfalfa is cultivated in climates differing to a great extent and a daily average temperature in the developing time of over 5oC. But 25oC is the optimum temperature for growing Alfalfa. When the temperature rises over 30oC and when it falls below 10oC, there is a sharp fall in the growth. When compared to the humid surroundings, the yield is higher in warm conditions

On account of its rich content of proteins and fibers that provide for faster digestion, it is the main food for dairy cows that have a high yield of milk, and secondly it is a feed for the horses, beef cattle, goats and sheep. The hay of Alfalfa is a major source of fiber in the diet of rabbits. Alfalfa leaves: Concentrated and dehydrated alfalfa are used in the diet of poultry for meat and pigmenting eggs, because they are rich in carotenoids that is very good for body lipids and for coloring the yolk of the eggs, The sprouts of Alfalfa are used by human beings in sandwiches and in salads. The dehydrated form of alfalfa leaf is available commercially; this is a supplement for dietary food in the form of tablets, tea and powder. The hazard of Alfalfa is that it leads to bloating in livestock while grazing on them, thus be careful in this matter.

Similar to other plants, there is a possibility for various pathogens and pests to attack alfalfa. The diseases caused have mild symptoms that lead to damage of stems, roots and leaves. Pests such as weevil, armyworms, aphids and potato leafhopper, will drastically reduce the yield of alfalfa, especially when the weather is warm in the second cutting. At times we use chemical means of control to get rid of these pests. Besides, alfalfa is also liable to damage of the roots due to problems like, Rhizoctonia, Phytophthora and Texas root rot.