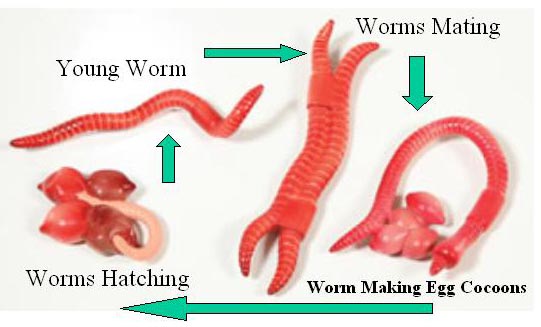 The worm life cycle is really interesting! Article with pictures all about worm reproduction.

Did you know that worms are “hermaphrodites?” That means that each single worm has both male and female reproductive parts.  This is one of the coolest facts about worms!  Not a lot of people understand exactly how worms reproduce and how the male and female organs work together.  In this article, we will explore not only how worms reproduce but also the worm’s life cycle!

Now that you know that worms are hermaphrodites and they each have both organs inside of their bodies, you are probably wondering exactly how you can tell when a worm is ready to start reproducing.  Well, when a worm is about four to six weeks old, it will start to form a whitish band around its head, which is called a clitellum. This is where both reproductive organs exist.

Now, even though worms have both sets of organs inside their bodies, they do still need another worm to mate with and they will end up joining together when they are ready to mate. Their heads will face in opposite directions and they will put their clitellums together.  Sperm will pass from one worm to another and it will be stored in sacs. One of the most amazing things about worms is that they can live for years and years as long as the climate and conditions are right.  Worms bodies are roughly made up of ninety percent water and one of the ways that a worm will die is because of the water drying up!  One of the coolest things about worms is that when they die, their body just becomes part of the compost in the soil and throughout their life and death, they are helping the soil one way or another!