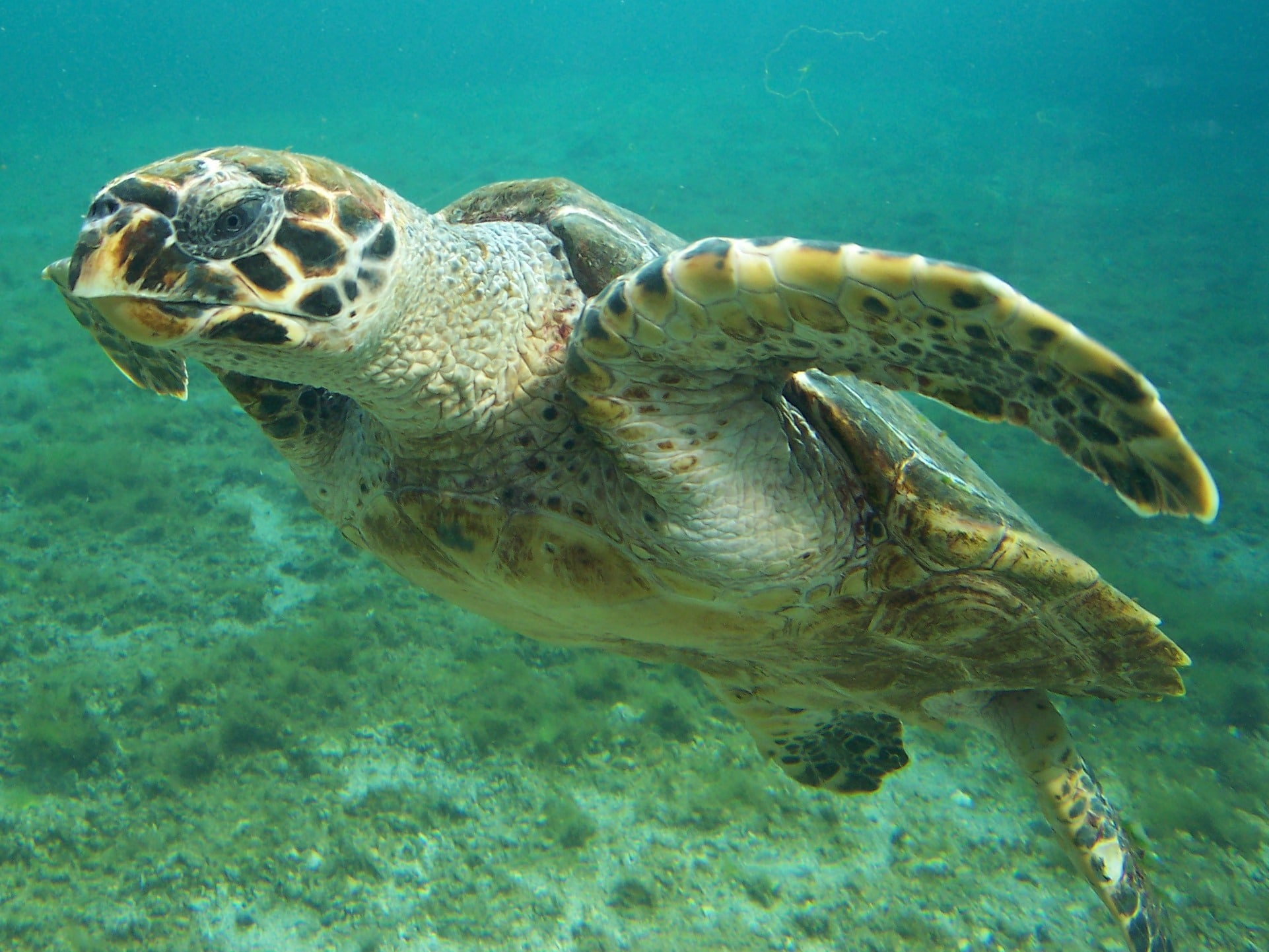 The hawksbill sea turtle (Eretmochelys imbricate) that hails from the Chelonidae family is a seriously endangered turtle. It is the sole species that exists in the Eretmochelys genus.

This species spread wide from the Atlantic Ocean to Pacific Ocean. The subspecies E.i.bissa is of the Indo-Pacific region. The hawksbills help to maintain the health of coral reef. As and when the sponges that prey on the reefs move away from the surface, an enhanced entrance becomes accessible to the reef fish to feed on. Hawkbills contribute greatly to tourism and cultural values. For instance; for the locals residing in the coral triangle, the main source of income is from the tourists who have a high regard for turtles.

When compared with the other sea turtles, the hawksbill sea turtle is not that large. The shell length of hawksbill is 45” (114 cm) and weight is 150 lbs (68 kg). At infancy, their upper shell or carapace has a heart shape and while growing, it lengthens. Its carapace has a conspicuous coloration and serrations with scutes or thick bony plates overlapping one over the other. Their “hawksbill” name refers to their heads tapering to a point in the form of a bird’s beak. Another peculiar feature is its pair of claws that ornament each flipper. Male hawksbills are different from their females in that, their claws are long, tails thicker and have a brilliant color. The discriminating feature of the E. Imbricata is its curved and sharp beak with noticeable tomium and the margin of the shell that appears like a saw. In accordance with the temperature of the water, its color slightly alters. This turtle spends most of its life on coral reefs and shallow lagoons and less time in open oceans. We find adult hawksbill sea turtles chiefly in the Atlantic Ocean, Pacific Ocean and coral reefs in India. The whole day, the hawksbills rest on ledges, caves and all around these reefs. These turtles journey a long way and inhabit many places from lagoons, open oceans and also mangrove swamps in estuaries. The initial life stage of these turtles’ and their habitat preferences are not well known. These turtles, similar to other infant sea turtles, are totally pelagic; they stay in the sea till they develop. The Indo-Pacific sub-population and the Atlantic sub-population are the two major sub-populations that exist.

Hawksbill sea turtles similar to the other sea turtle perform unbelievable journeys travelling from feeding locations to the nesting grounds, usually on tropical beaches. These turtles generally mate every 2 – 3 years close to the shore in shallow waters. The process of nesting starts when the turtles leave the sea and go in search of a place to lay their eggs. They dig a hole in the sand, fill the eggs into it and then cover the hole. At this time the turtles leave the eggs and return to the sea. The incubation period is 60 days. The highly risky time of their lives is when the hatchlings migrate from their nests to the sea. During this short scampering, flocks of gulls and crabs greedily prey on them.

“Hawksbill turtles” are omnivorous animals, they feed on sea urchins, marine algae, jellyfish, fish and mollusks. Their hard shells protect them from their predators. In spite of this they become prey to crocodiles, human beings, sharks, octopuses and large fish. If you happen to get hold of one you will either face a prison sentence or a huge fine. If you are thinking of possessing one at great risk, the tank required is comparatively huge with tremendous plant rooms to work all the filters, boilers and ultraviolet lights that you need for replicating an ideal environment.