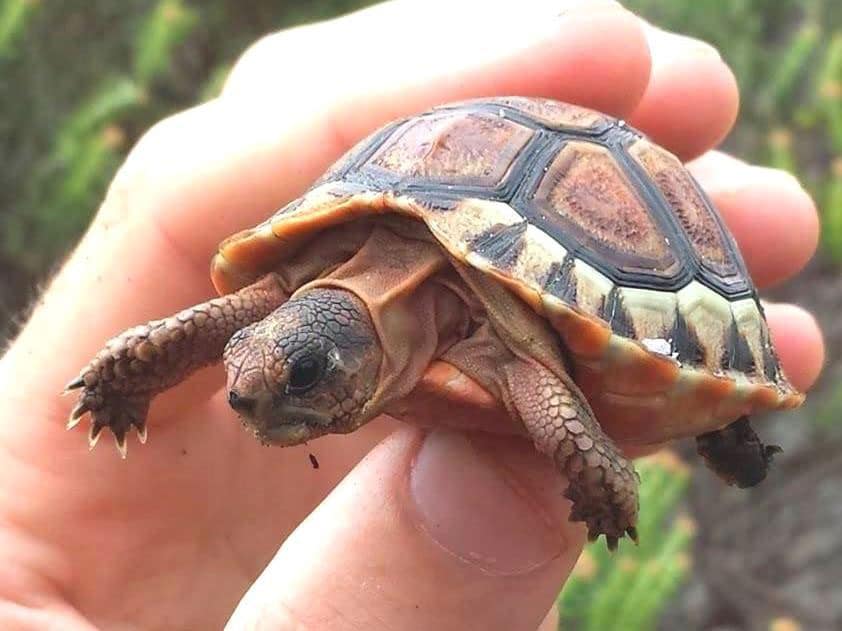 Angulated tortoises belong to the species of tortoise Chersina angulata, the only species of the genus Chersina.  We can find these species in the dry regions and the scrub forests of South Africa.  This tortoise specimen is very distinctive, classified in the monotypic Chersina genus.  They are very different from other tortoise species.  They are closely related to diminutive padlopers of the Homopus species.  In fact, Angulatedd  tortoises share the habitat in South Africa with them.

In the International scene, these tortoises are also called bowsprit tortoise.  In South Africa, they are called Angulatedd tortoises in English and Rooipens Skilpad in Afrikaans, which means red-bellied tortoise.

The Angulatedd Tortoise is a very shy small creature with comparatively variable  shells. We can identify these tortoises by their ‘bowsprits’ which are basically projections of the gular shields, located on the plastron under  the chin.    The males make use of these protrusions to fight for territory or mates. The species is unique in that they have only one gular shield under the chin compared to the other African tortoises who have divided or double scaled gular shields. They have 5 claws on the front leg and 4 on the back legs.  Like all South African tortoises they have nuchal (relating to the neck or nape) scutes.

You can see a lot of regional variations in this tortoise species.  Tortoises belonging to the west coast of South Africa exhibit a reddish color, particularly on the under side. Hence the name, Rooipens which means red belly in Afrikaans.  Angulated tortoises of the Karoo region are on the darker side and some tortoises of the species are uniformly black.  Tortoises to the east of the range are smaller and lighter.  However, individuals from all the populations of these species assume a brown color in old age, uniformly.

Angulated tortoises exhibit considerable Dimorphism or differences between the sexes.  The males are generally larger.  They have concave bellies and a ‘peanut shape’, which is longer and thinner.  They use the ‘bow sprits (extended and enlarged Gular Scutes) which they use for fighting.  The females are smaller and more rotund. Their bellies are either flat or slightly convex.

The natural habitats of the bowsprit tortoises are Strandveld (coastal Scrub), Albany thickets, the Karoo and Fynbos regions.  These regions in the south west parts of South Africa are semi arid and have Mediterranean climates with rainfall in winter.  The Angulated Tortoise is tough and adaptable within this climatic range.

Geographically speaking, This natural range extends up to the southern parts of Namibia, from  across the Floristic cape region.  Tourists also have introduced small colonies in domestic gardens of Walvis bay and Swakopmund and further towards the north, in central Namibia.  The range of the Angulated Tortoise extends to the east along the south coast of the cape, to east London.  We can find a real dense colony on Dassen Island, off the South African coast.  As a rule, we can find a  greater  number of these species along the coast.  Inland, the densities diminish.  Smaller populations exist even in parts of the Karoo.

Predators of this Tortoise

Apart from the threats they face from predators, they also face the biggest threat from human activity.  Agricultural and other kinds of developments have led to the destruction of their habitats.  Illegal collection of these tortoises for the pet trade is also taking its toll on tortoise populations.  A lot of tortoises die when they attempt to cross busy roads.  Human pied crow species have become very invasive and they kill thousands of infant tortoises every year that is especially true of the west coast, where these invasive creatures are spreading rapidly.

Angular tortoises are threatened  by human activity in cape Floristic regions.  Habitat destruction has become quite common.  Extensive cultivation has forced the Angular tortoise to survive in marginal pockets of the habitat that are often too small as well as fragmented.  Even  the less fertile  upland areas are used for traditional crop cultivation and this reduces the tortoise’s natural habitat.  Dense alien plantations pose a further threat.  Angular tortoises are commonly kept as pets.  Funnily, we have little information the these tortoises in the wild.

Appendix  II of CITES (Convention on International Trade in Endangered Species) has listed the Angulated Tortoise.  This means that International Trade of the species needs careful monitoring and control.  Tortoises are part of the protected wildlife in Namibia and South Africa. You need permits for their collection and export.  Improved protection of the Angulated tortoise will be required to prevent further decline of the species in the future. If you keep your pet tortoise in a garden, remember that they need a sufficiently warm and dry area with a varied range of possible  plant foods. They eat a variety of native South African plants.  You must ensure that there is a similar range of edible plants in the garden.  They will not stay healthy if you feed them one type of food only like lettuce.

Male Angulated tortoises just love to joust.  They are very territorial and fight each other at every opportunity.  It is better that you do not keep the males together.

If your garden is suburban, make sure that it is securely walled.  This will ensure that the Tortoise will not wander into nearby roads and traffic.  The property must not have a swimming pool.  Angulated tortoises cannot swim and they will drown if they fall into deep water.  Domestic dogs can prove to be a great threat to your pet tortoise.

Like most reptiles, tortoises regulate their own temperatures.  They do this by alternately moving between sunny and shady spots.  A large garden is therefore needed for them to move about to seek sunlight and shade.  Make sure that the habitat is dry. Constant moisture is bad for the species.