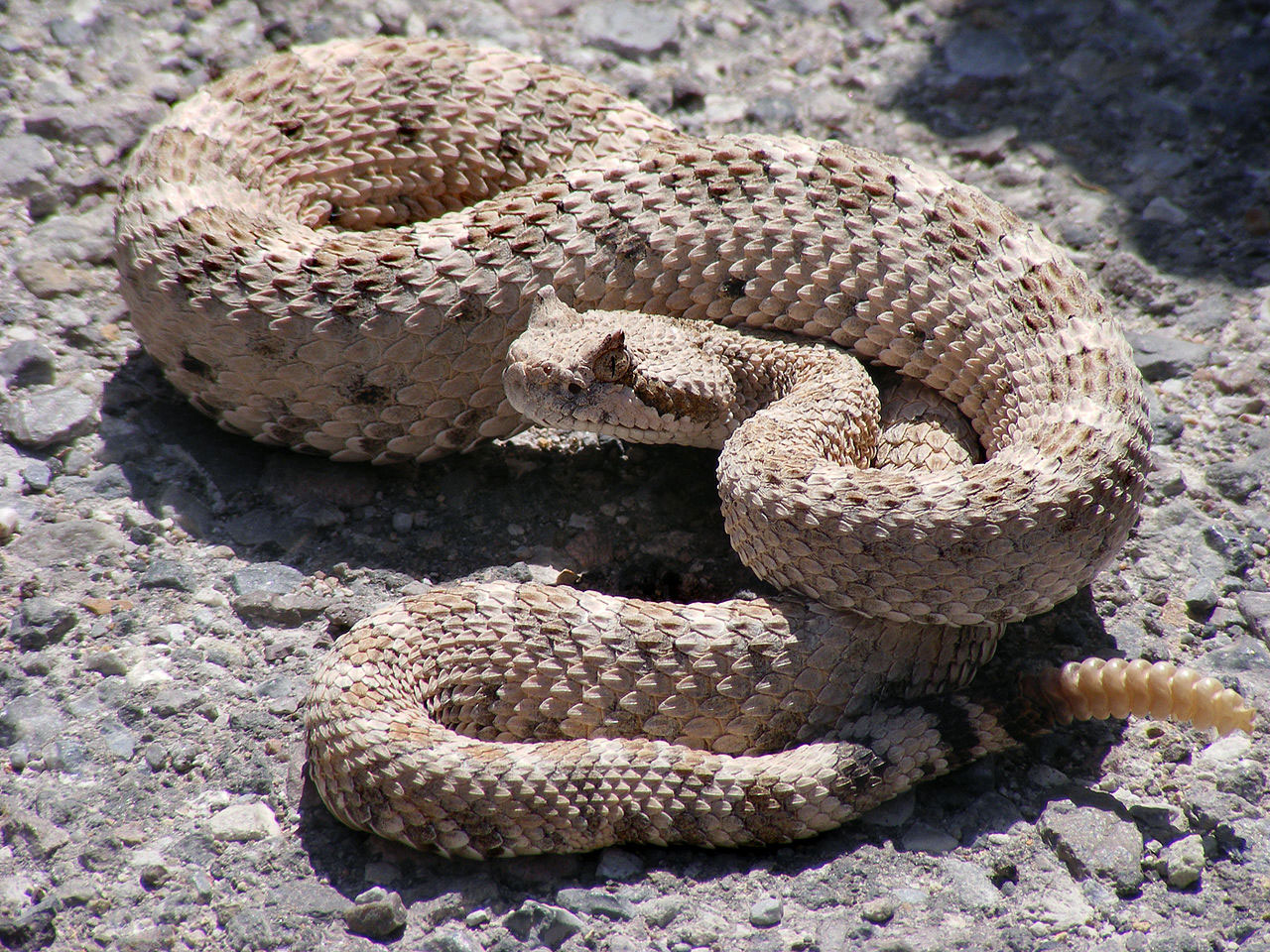 The Crotalus Cerastes snake, a variety of venomous pit viper belongs to the genera Crotalus (rattlesnake) .They dwell in the North West of Mexico and in the South west of the United States in the desert regions. Three subordinate varieties of sidewinders are recently identified as mentioned below:

The 3 varieties of Sidewinder Snakes are the Colorado Desert Sidewinder, the Sonoran Sidewinder and the Mojave Sidewinder. The Sidewinders in general inhabit the southwest deserts of America.

The sidewinder, a tiny active snake,  has a prominent projection on top of both eyes in the form of horns. They are mainly nocturnal; they take shelter in other animal burrows or beneath bushes at day time. The pale Sidewinder snake is sandy in color; at a glance it appears yellow and pinkish. Their back is spotted with dark and light patches and their sides are speckled. The head of a Sidewinder is wide,  in the shape of a triangle. The slender neck widens towards the body. Its tail is black or brown in color and is short, which has a tiny rattle at its end. Besides, close to their eyes, on either sides of their head, there are holes named pits or hollows that sense heat and helps them to sense creatures that are warm-blooded. The length of an adult is 30 inches, while the females are normally bigger when compared to their males, causing a bit of dimorphism in sex.

The scales of the Sidewinder are keeled and rough, this helps it to have an exceptional Sidewinding movement. Its supra-oculars (triangular protuberance on top of both eyes) are inverted and pointed,  resembling horns, which gives it the nickname Horned Rattlesnake.

The general name,  Sidewinder, has a passing reference to its normal mode of movement, which is believed to give it a grip in the desert sand. In this sidewinding movement, the snake throws its body across the sand and not only spends much less energy as it would do if it slithered like other snakes, but also stays cool in the hot desert sands.However,  the Sidewinder uses  this odd type of specialized movement over any substrate to move quickly. Since its body advances on top of loose sand, it leaves an impression shaped J, The other dwellers of the desert, also adopt the Sidewinder movement when they start their movement

Predators of the sidewinder snake

The animals that are predators to the sidewinder snake are eagles, roadrunners, and most birds and mammal desert predators. The Kingsnakes also eat these snakes.

You can frequently come across sidewinders in the flatlands, dry deserts, loose sandy washes, under rocky locations right up to  5,000 feet as well as hardpan flats or dense soil layers.  You can also see them  in the midst of the hummocks filled with creosote(by-product of a tar distillation), that houses their food supply of rodents and kangaroo rats. In Nevada, this is the tiniest and not at all a harmful snake. The range of the sidewinder extends from southwest Utah, southern regions of Nevada,  western regions of Arizona, the Sonorant deserts of Eastern California and Mojave.

Sidewinders deliver young live ones. The two crucial events that are of importance in the calendar of Sidewinders are birth and mating. Certain females of this species breed in alternative years. Others have a break of two years for breeding, if there is scarcity in availability of food.

Mating is normally in April and May, and they give birth to the young in the middle of summer. Litters are between seven to thirteen. The Crotalus Cerastes snake dwells in the hottest regions of Mexico and Arizona. As such, it is mandatory to construct a terrarium which simulates its habitat in the wild. The smallest size required for housing two Crotalus Cerastes snakes is 100 L x 50 D x 50 H cm. Even then it is better to construct a bigger one. The substrate required is fine gravel, sand or Corbo biodegradable combo. Corbo is clean, lightweight and ornamental. It is available in the reptile and bird pet stores. Pack the enclosure’s base with substrate to a nearly 5 cm. In any corner of the enclosure construct a cavern with flagstones. Beneath this cavern keep a heat mat and over the cavern suspend a basking light; generally an incandescent bulb fitted with a reflector will suffice. These facilities will help your snake to have a warm, dark, and secure hideout, and  a warm spot to bask. Since you arranged both the sources of heating in the same corner, you will have one extreme of the terrarium hot, and the other cool.  This arrangement will facilitate the snake to travel to and fro from one extreme to the other and regulate its temperature. Keep the heating mat constantly turned on. The light bulb is regulated for 12 to 14 hours at day with a timer. Embellish your enclosure with dead wood, a tiny bowl of water, a tiny mammal’s skull or anything like an artificial cactus, but keep the decorations simple so that you can always see  the snake in the enclosure. Place a little water bowl water filled with 2 to 3 spoons of water twice a month. Grownup snakes require a meal in alternate weeks. Managing a Crotalus cerastes snake is comparatively easy.

Similar to other snakes, the Sidewinder  snake eats tiny rodents,  lizards and the Kangaroo rats. The Sidewinder kills its prey with its venom. Even though a bite from this snake is not fatal to mankind, on account of its miniature size, Sidewinder snake bite is poisonous, which needs professional medical aid.

Feeding this snake is an issue. They always prefer lizards and tiny rodents when in the wild. In captivity,  they frequently require lizards. You can get hold of the Mediterranean geckos (biologically name Hemidactylus Turcicus). As regards mice, to lessen the infectious parasites it is better for you to deep-freeze and then thaw the mice before feeding your snakes. Feeding these sidewinders with mice is possible by tricking them and placing a tail of a gecko in the mouse’s mouth.

While handling your pets, protect yourself by using a shield made of acrylic in between the snake and you. An acrylic glass of 30 x 30 cm fixed on to a handle as long as 70 cm is ideal.  The reason is that the acrylic is translucent and you will have a view of the snake always, thus while working in the cage you are much better protected.