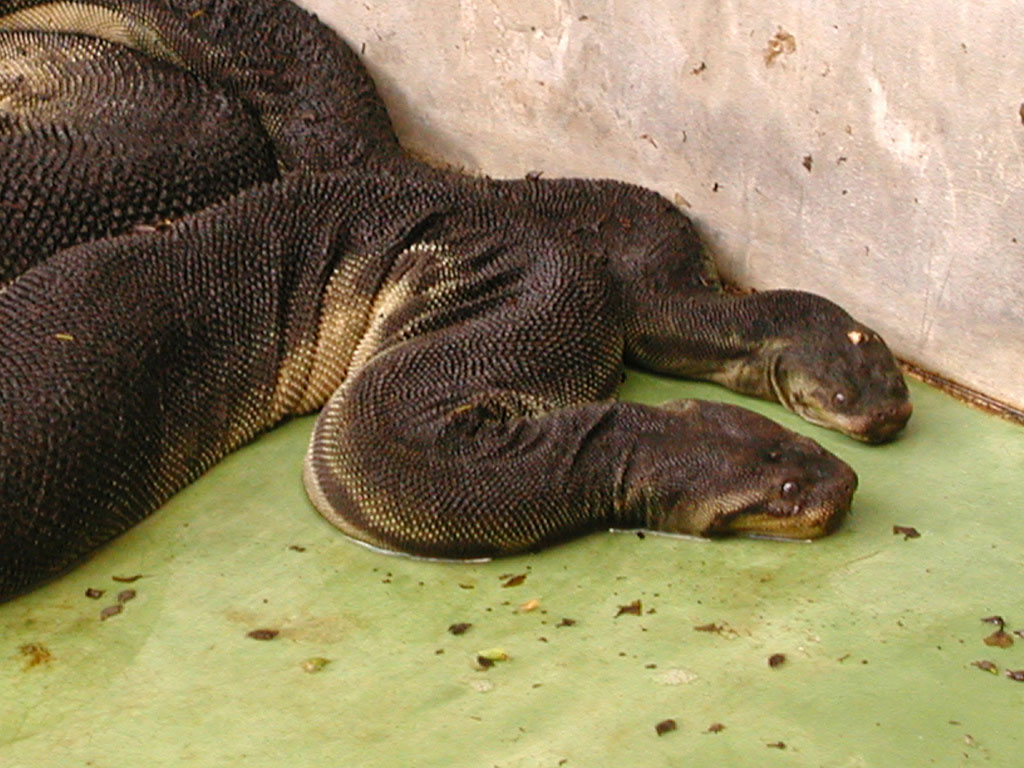 The elephant trunk snake Acrochordus Javanicus. The family  Acrochordus are a group of non-venomous,  primitive aquatic snakes. The snake does appear very similar to an elephant’s trunk, but the similarity with the elephant ends there, because its forked tongue and aquatic life pertain to its reptilian characteristics. They are also called (The Javan) file snake and wart snake. The names are descriptive of the rough skin of the snake.

The Elephant Trunk snake  possesses a  wide, flat head,  with the nostrils on top of the snout. The head resembles that of a boa. In the case of Elephant-trunk snakes, the head is as wide as the body. The females of the species are bigger than the males. The utmost length they reach is 240 centimeters. The snake’s  dorsal side is brown-colored and the ventral side is pale yellow.

The Elephant Trunk snake has a loose and baggy skin,  and appears many sizes too large for the reptile. Small, rough, adjacent scales cover the skin.  They call the leather as Karung and this has a good  demand in tannery industry.

The skin is the characteristic feature of (Elephant) trunk snakes that distinguish them from other snakes. Other snakes have relatively tight skin and overlapping scales. Each scale on the loose, baggy skin of the (Elephant) trunk snake, has  warty projections. The scales do not overlap either. Movement in water is easy because of the loose skin. Movement on land is an altogether different story.

While females grow up to eight feet in length, males have to be content with five.

These snakes are basically ambush predators. They lie waiting  till an edible prey comes near. The snakes then will wrap its body tightly around the prey. The scales exert a vice-like grip from which the most slippery, squirmy fish (even those with mucous coating) cannot escape.

You can come across these snakes in the Indo Pacific waters of the central tropics. You can also see them in Sumatra, Kalimantan,  possibly Bali, Malaysian west coast, Cambodia, Thailand and Vietnam. They are not  seen east of the Wallace line.
The habitats of the species are coastal like estuaries, lagoons and rivers. They seem to have a preference for fresh water over Brackish environments.
The snakes spend most of the time underwater. The snake can remain submerged up to 40 minutes without coming up for air. The Elephant (trunk) snake is a live bearer. The female carries the clutch of eggs inside the body and the babies come out after hatching. Before they fully develop their baggy skins, baby snakes spend more time on land. Once they mature, movement on land becomes difficult and they take to the water.

It is best to house these snakes alone in a 40 Gallon breeder aquarium. The hinged glass tops of the aquarium can be weighted with rocks to prevent escape attempts. Providing in line heaters in the sump with a heater controller will ensure that the temperature of the water is appropriate.

Elephant trunk snakes feed on fish. They are not particular about the type of fish they feed on. Some of their favorites are, Goldfish, minnows, Shiners, Guppies, Mollies, Sword tails and the like, all live. They do not seem to relish dead fish placed in the tank.

Handling is strictly not  for these snake species. The bone and muscle structure of this snake is designed for life in water. They should not be lifted or made to support their body weight. If you handle them, the consequences will be disastrous – for the snake.