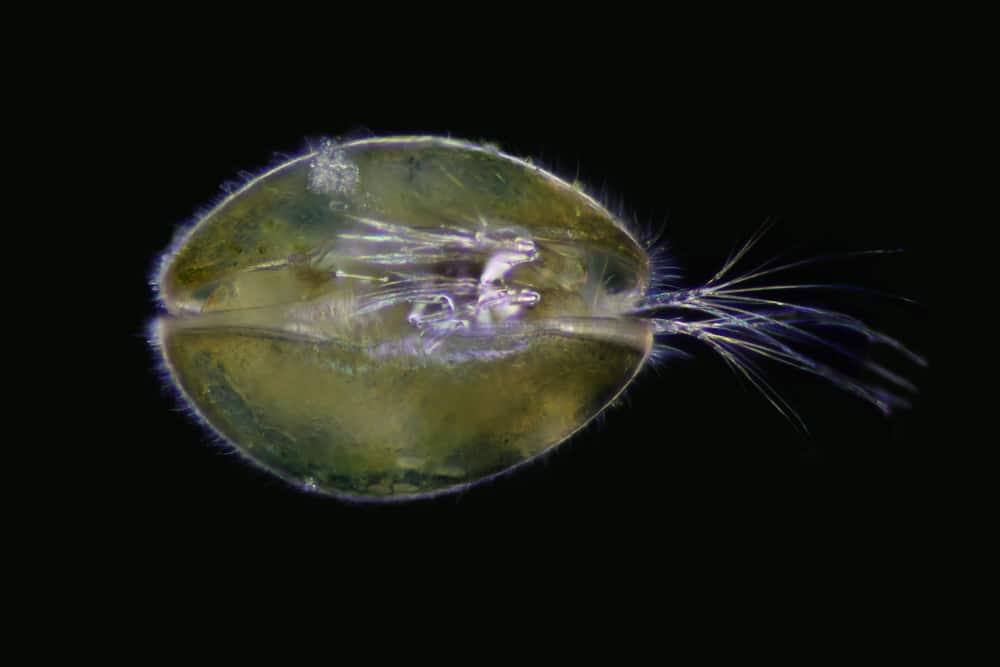 The Ostracods belong to the class Ostracoda that people also call seed shrimp. They have approximately 8000 living species. They are generally small with a length of about 1mm but in the case of Gigantocypris, their length ranges from 0.2 to 30 mm. They crawl on or burrow into the sediments at the bottom of oceans or lakes. In the moist terrestrial habits, a few species, for example Mesocypris are found crawling.

Ostracods are made up of little more than the head. From side to side, their bodies are flattened and protected by bivalve-like calcareous valves or shells. The body of ostracods is covered by two valves, which from the outside look like a shell of a clam. The axis of the two valves is in the dorsal region of the body. A difference is made between the two valves (hard part) and the body with its appendages (soft part).

The body is made up of head and thorax which is separated by slight restrictions. The body does not have a clear segmental division, and this is dissimilar with other crustacean varieties. They have no abdomen, it is moved back while they have comparatively large gonads. The largest part of the body is the head that contains most of the appendages. For swimming in the water they use two pairs of well developed antennae. Beside this, they also have two pairs of maxillae and a pair of mandibles.

Two pairs of appendages are present in the thorax, but these are reduced to a single pair, or are completely absent in some species. From the tip of the tail, the two “Rami” or projections, point downwards and a little forward from the back of the shell.

Gills are absent in Ostracods and in its place they take in oxygen through Bronchial plates on the body surface. Heart or circulatory system is absent in most of the ostracods and in between the valves of the shell, blood is circulated. Through the glands on the maxillae, antennae or both; nitrogenous waste is excreted.

Touch is the primary sense of ostracods because they have many sensitive hairs on their body and appendages. Ostracods contain a single naupliar eye, but in some cases, they contain a pair of compound eyes.

The food- gathering processes in the ostracods is complicated. Except for the median movable process in its posterior region, the upper lip is fixed, but the oral edge is serrate. The Hypostome, however, vibrates backwards and forward with the help of the muscles, and bring food particles in the mouth. Besides its forward edges, the hypostome has a pair of soft setiferous lobes, which move the food forward.

The mandibles have only the masticatory organs that have strong teeth at the ventral ends of the coxae. The esophagus, mouth, pharynx, and ventral pharynx are covered with chitin and form Stomadaeum. In the upper lip a pair of glands known as salivary glands, empty into the mouth and secretes the digestive gland. Two penises are present in male ostracods and the females have two equivalent genital openings and orgonopores. Large individual sperms lie coiled up within the testis prior to mating. During the swarming, the mating usually occurs with large number. As in the planktons, in most of the ostracods, the eggs are either laid directly into the water or are attached to the substratum.