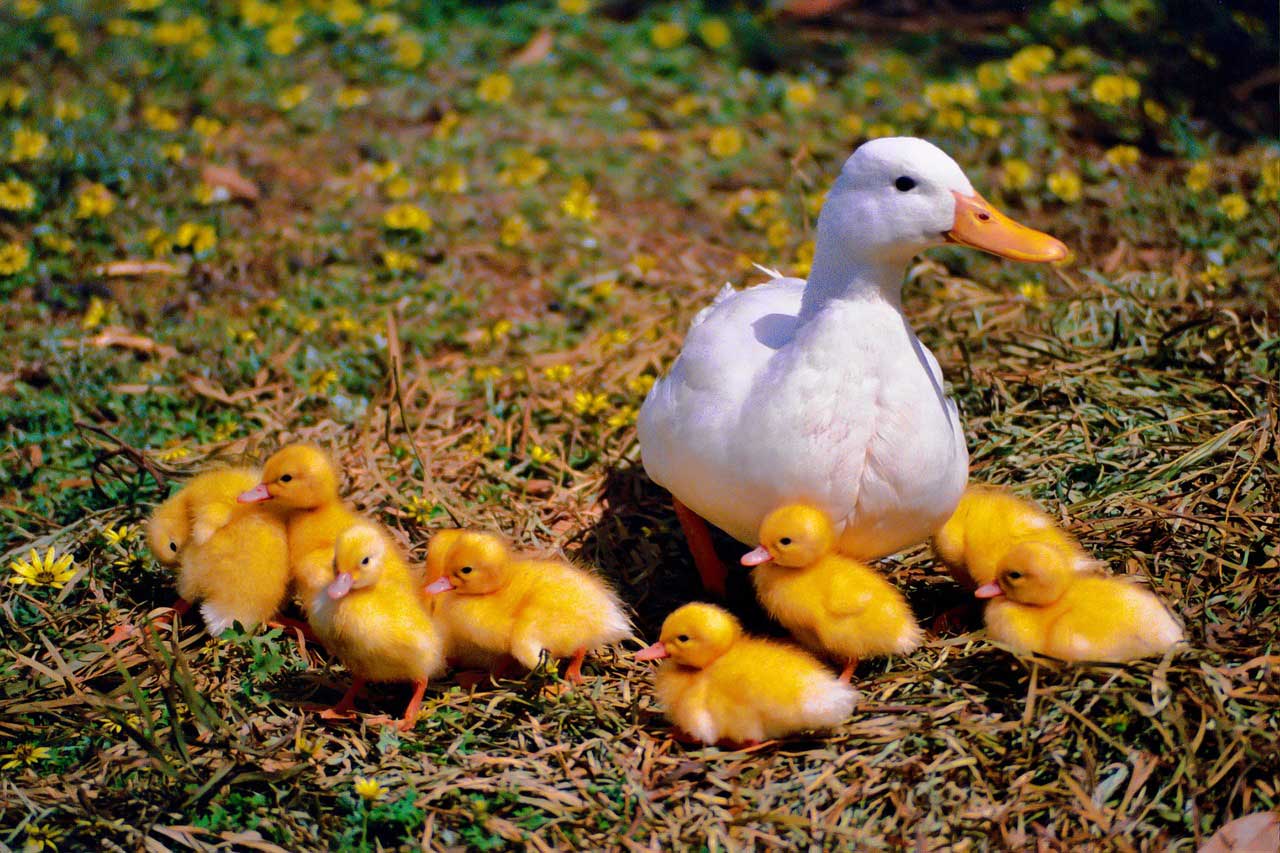 Duck refers to birds of many species belonging to the family Anatidae that also comprise of geese and swans. The different species of duck belongs to different subfamilies under the Anatidae family. They are aquatic birds that can be seen both in sea and fresh water. In appearance, they look smaller than the geese and swans. They are also known as Waterfowl in some regions.

A duck is a long necked and elongated bird that attains a size of around 30 to 50 cm in length. The weight of this bird ranges from 0.7 kg to 1.4 kg, and its wingspan is about 60 to 80 cm. It lives for 4 to 8 years. It can be found in a wide range of colors like gray, white, yellow, brown, black and green. It has a broad and serrated bill, and scaly but strong legs. It has distinctive webbed feet that help it to swim faster. These webbed feet work as paddles while swimming, and hence they “waddle” instead of walking properly. Their unique feet cannot feel cold, even if they inhabit an ice cold water body.  It is because, their feet lacks any blood vessels or nerves for realization. Similarly, their feathers are water-proof due to the application of oil over the feathers by the duck itself. A duck possesses a special gland, known as ‘Preen Gland’, situated near the tail part. The oil is produced by this gland, which is used by the duck to coat the whole body and feathers. Without this oil, the feathers of the duck may become wet and waterlogged, as they spend most of their life in and around water bodies. These soft and fluffy feathers under the waterproof protection keep the duck’s body warm.

The distribution of duck is more in cosmopolitan regions. Many species are found on the islands of the sub-Antarctica, like Auckland Islands and South Georgia Islands. Several species have also managed to settle on the oceanic islands, including Kerguelen, Hawaii and New Zealand. But most of these species are endangered ones or have turned extinct. Some species found in the Northern Hemisphere of Arctic region and temperate areas are migratory in nature, but the species in the tropical areas are not migratory. Ducks found in Australia are nomadic in nature that looks for temporary pools or lakes that are formed by the heavy rains.

The ducks search for a suitable mate during the winter.  It indulges in the mating process within the first year of its life. The male ducks try to attract the female by exhibiting their colorful feathers or plumage. But the female will take the male to the breeding location only during the spring season. The female shows her interest by swimming with her neck above the water surface, and by rapid beak shaking and quacking.  The breeding ground preferred by the duck is usually the one where it was born. The nest for breeding is built with reeds or grass, and sometimes it is also built in a tree hole. The male ducks have the duty to guard the territory from other couples. The female duck lays around 5 to 12 eggs, which she incubates by sitting on top of them, to keep them warm. Normally, the eggs take 28 days to hatch. The female duck gives protection and care to its little ones. Ducks are generally considered as birds having social behavior. Similar to the dabbling duck species, the domestic ducks are too gregarious in behavior. Gregarious behavior is referred to the herding or flocking instinct, which develops due to the social attachment between them. The ducks always stay together as a flock, as it gives protection from predators.  It also eases the search for food, when in a group. The communication between them takes place by making different types of sounds and using different actions. Being social, different species of ducks can also be kept together on the farm or in the water body.

Ducks have many predators across the world. Predators find them an easy prey, as they cannot fly easily. This creature is a prey not only to the predatory birds, but also to the larger fish, crocodiles, pike and other big aquatic hunters. The eggs and the nest of the ducks are hunted by the land dwelling predators like snakes, rats and similar creatures. The brooding female ducks are caught by the big animals like fox, owls or hawks. Most ducks also fall prey to humans.

Ducks are very profitable for farming business, as it is quite popular for its meat and eggs. In most countries, ducks have similar demand to that of a chicken. They are raised for both commercial and personal purposes. Like chicken, ducks are raised in farms for commercial purpose, as well as, raised in the backyard of the houses for personal purposes. Ducks are easy to manage and require very less expense, especially for domestic requirements. They are hardy in nature, so very little care is required, and they can adjust to all types of climates. They require less time to grow and breed, and any type of food can be given to these birds. A regular food menu that they prefer is rice, copra, fruits, cassava, corn and similar low cost and easily available food. They also like eating algae, fungi, earthworm, green legumes, snails, maggots and other insects, which is also a cost effective way. Compared to the chicken, duck has a low mortality rate, so it can be a positive sign for a profitable business.  The egg production of ducks extends for a long period of time and can provide a good source of money in the commercial market. Duck meat and egg are quite famous like chicken, and many a times, it is also used as a substitute. Both the freshwater and the sea water bird are used for culinary purpose. The breast and the leg part of the duck have more flesh, which is used for cooking. The kidneys and the heart are also used to make several delicacies. The liver part is considered very special, and can be found in various special dishes made from duck. The most popular duck dishes in the international cuisine are the roasted duck, duck Confit and Peking duck. The high versatility of the duck meat makes it more popular among the non-vegetarian food lovers. It is very juicy, and can be easily added to any recipes that uses poultry meat. It is available in minced, sliced or whole form. In most of the cuisine, duck is made in a gravy form that also goes well with rice. In many traditions, duck meat is the most important part of their cuisine. Traditional Chinese cuisine was very fond of duck meat, and prepared it during festivals and occasions. It is considered as a healthy meat, as it lacks fat content compared to the other poultry meat.